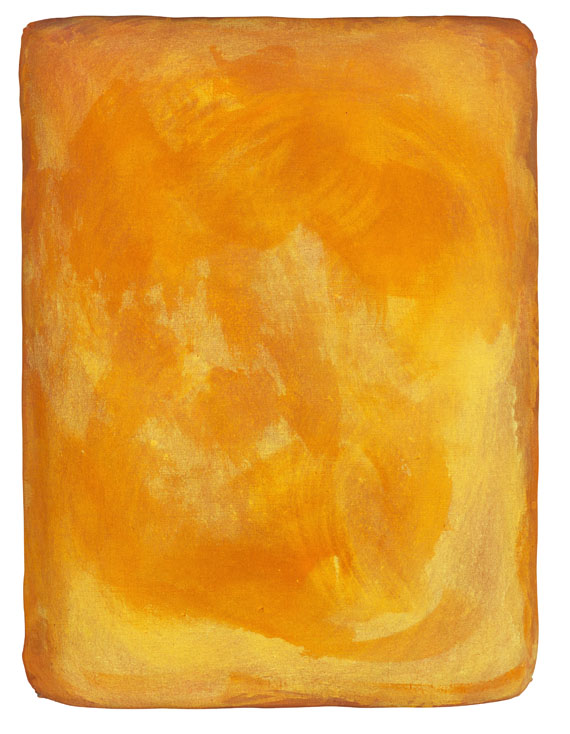 PROVENANCE: Private collection Schleswig-Holstein (acquired from the artist in 1998).

While Gotthard Graubner’s career as an artist began with drawings that comprised studies of nature, portraits and nudes, it took just a few years until he entirely shifted his focus on the color and its spatial effects. He soon attained a very individual technique that helped him to make the color tangible for the observer. Graubner employs canvasses that he cushioned with synthetic wadding onto which he applies several layers of paint by means of broad brushes, sponges or even brooms. The colors blend and overlay and eventually form a both intensive yet nuanced color experience. In the 1970s the artist conceived the term "Farbraumkörper" (Color Space Bodies) for these voluminous cushion objects. A term that shows how much liveliness Graubner ascribes to the relief-like and paint-soaked objects, at time he also refers to them as "Farborganismen" (Color Organisms) or "Farbleiber" (Color Bodies). Owing to their radical otherness, spatial orientation and reduction to the color’s artistic and aesthetic intrinsic value, his works do not just overcome gestural aspects of informal post-war painting, they also extend the traditional image concept which only recognizes classic panel paintings as artworks. His "Farbraumkörper" are often erroneously described as monochrome works, however, this remarkable work from the 1990s impressively delivers counter-proof thereof. Graubner creates an entity from a variety of nuances, which also comprise the dynamic brushstrokes that became characteristic of some of his works made since the 1980s. The three-dimensional cushion bodies with their rounded edges are always composed of just one dominant color and a variety of its nuances. This way the color is enabled to unfold all its suggestive power and to evoke sensations and emotions in the observer. The works have a strong meditative character that can to some extent be explained with Graubner’s personal experience. The artist visited Bhutan in the late 1970s and became intensively occupied with Buddhism. The effect that this spiritual development had on the artist was examined in the grand Graubner retrospective "Mit den Bildern atmen" (Breathing with Pictures) at the Arp Museum Bahnhof Rolandseck in 2018. The title presumably references Anapanasati, a kind of Buddhist meditation that puts focus on the mindfulness of breathing. In this context it is little surprising that nuances of yellow, as well as hues of red and orange play a big role in Gotthard Graubner’s oeuvre. This work offered here also captivates the observer with a breathtaking orange that has such a strong intensity and spatial presence that the observer can hardly resist its magic. [CH]
More Information
+
Sell
Get a free appraisal for a similar object!
+
Register for
Gotthard Graubner
+
Buying from A-Z
+
Contact a specialist
+
Gotthard Graubner Biography
Share