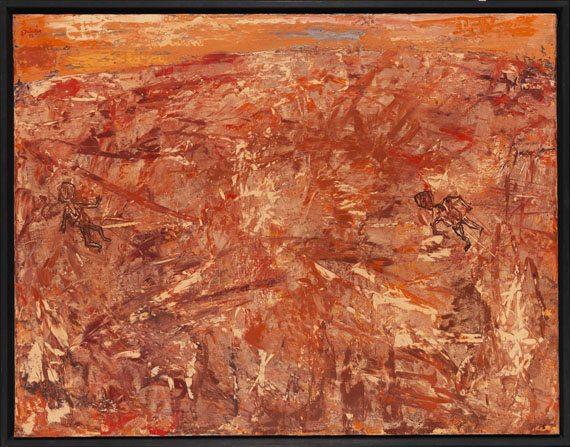 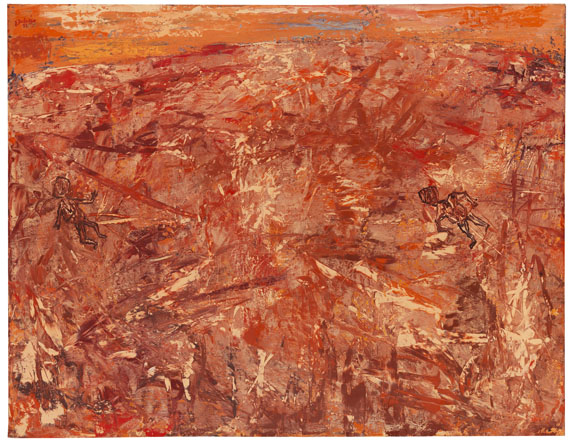 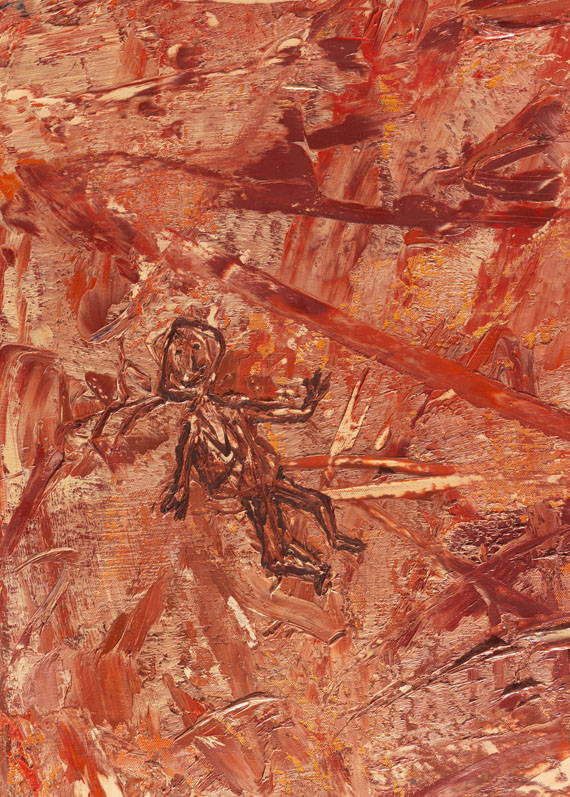 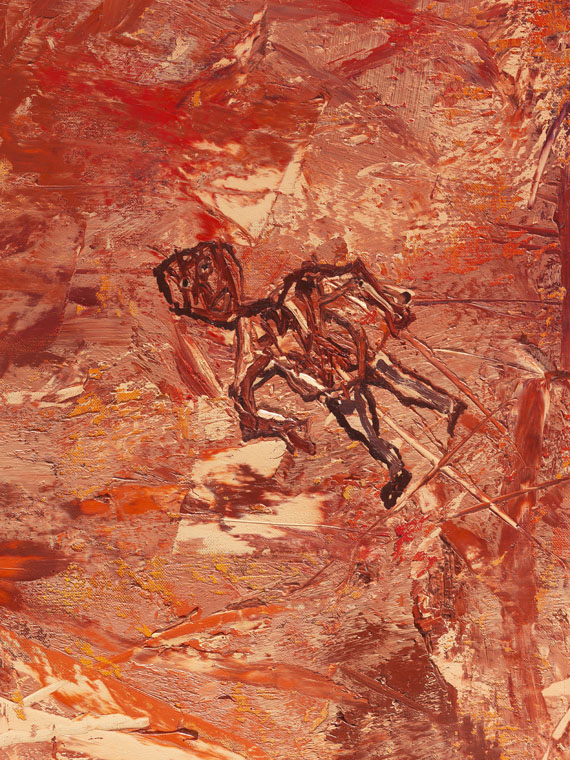 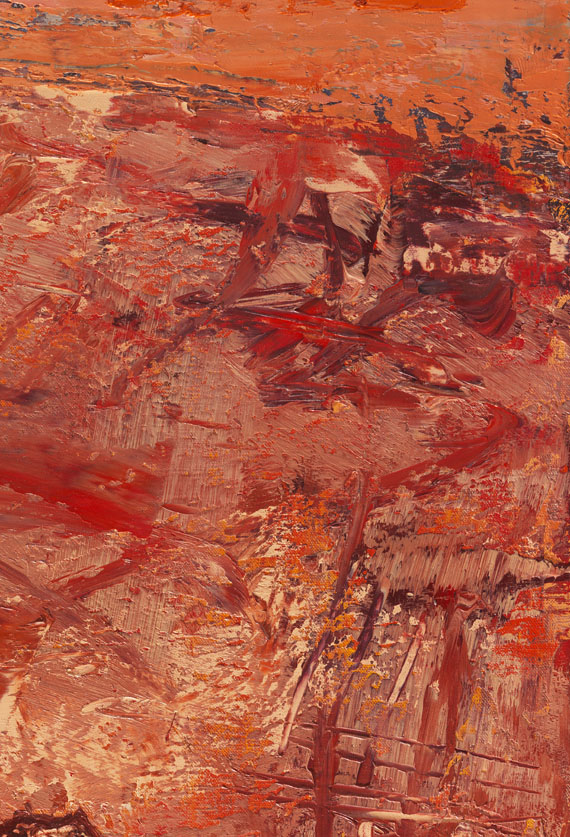 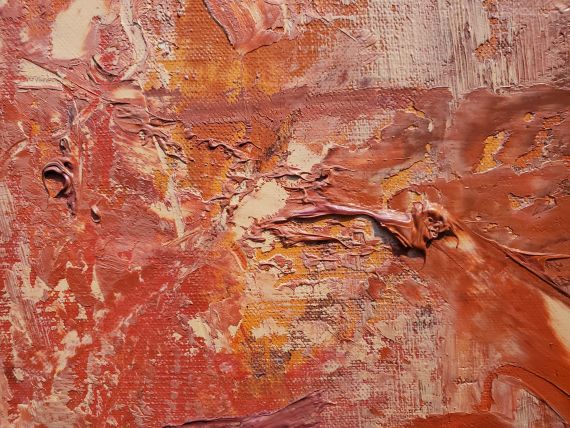 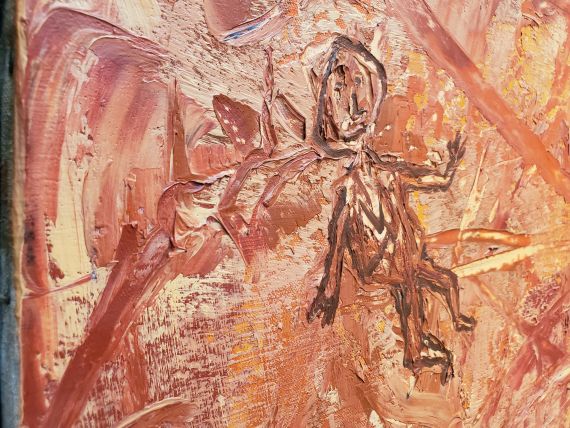 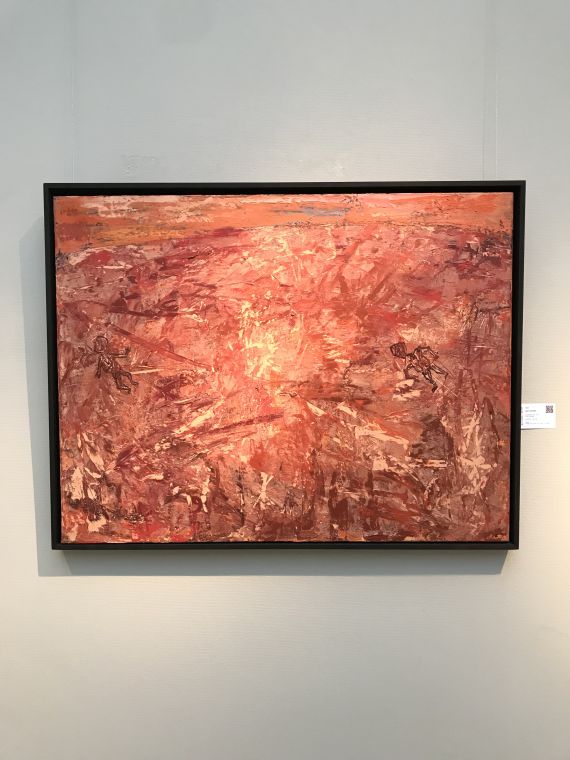 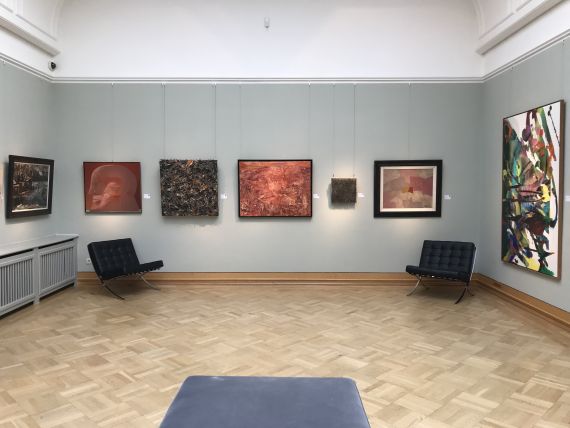 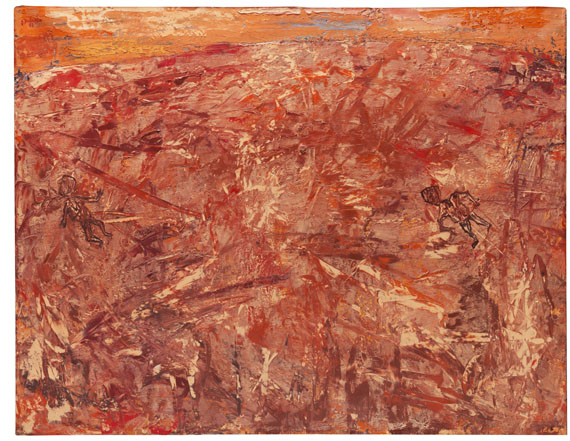 •Similar works from the series "Pâtes battues" are in acclaimed collections such as Tate Gallery, London (La vie affairée, 1953) or MACBA/Museu d'Art Contemporani de Barcelona (Le chien jappeur, 1953).
• Landscape in characteristic Dubuffet duct.
• In an exceptional coloring.
• In 1954 the work was shown in the first retrospective of works by Jean Dubuffet at the Cercle Volnay, Paris.

We are grateful to the Fondation Dubuffet, Paris, for the kind expert advice.

LITERATURE: Sotheby's, London, Contemporary Art, June 26, 1996, sale no. LN6 377, lot no. 37.
Christie's, New York, Post War and Contemporary Art, May 12, 2005, lot no. 238 (with two small labels on verso of the frame).
"I strive to create art that is directly linked with our everyday life and that is a result thereof, art that captures the immediate effects of our real lifes and our true perceptions."
Jean Dubuffet in his speech "Antikulturelle Standpunkte" at the Arts Club of Chicago on December 20, 1951

"In my mind the concept of beauty has absolutely failed. [..] No one doubts that beauty exists, but there are no two people in this world who would agree one thing both consider likewise beautiful. [..] To me the idea is a puny and little sharp-witted concept. It barely excites me at all . [..] If [the West] realized that every day in any part of this world has potential for magic, then we all could significantly benefit from that." (Jean Dubuffet in his speech "Anticultural Positions" at the Arts Club of Chicago on December 20, 1951, quote after: Dubuffet. Retrospektive, Akademie der Künste, Berlin et al, September 7 – October 26, 1980, p. 66 f.). As precursor to Art Brut, self-taught artist and strong opponent of academic art and the culture industry in general, Jean Dubuffet did not only put the widely accepted concept of beauty into question, but also the techniques he employed and the artistic aims he pursued within his most versatile phases of creation. After a longer discontinuation of artistic production he began to paint again in the late 1940s, which means that his actual career as an artist only began when he was 42 years old. His oeuvre is characterized by creative renewal, innovative ideas and the use of entirely new and experimental techniques. He used, for instance, the wings of butterflies, sand, tar or dried leaves in some of his works. The 1950s were of decisive importance for the reception of his works. In 1991 the 'Kunstforum' wrote: "The pictures and collages from the 1950s made for Dubuffet’s (inadvertent) fame as, along with Fautrier, Tapiès and Schumacher, Europe’s most acclaimed material painters (vol. 112 Outside USA, p. 395). In November 1951 the artist moved to New York where he worked in a studio in Manhattan until April 1952. It was during these months that he delivered his seminal speech "Anticultural Positions" at the Arts Club of Chicago. In spring 1953, the year this work was made, Dubuffet created the series "Pâtes battues", which marked the end of the works with relief-like surfaces. From that point on he began to apply the creamy pastose paint mixtures onto the canvas with a spatula. Additionally, his palette changed, too, as he no longer exclusively used the more subdued earthen tones as it had been the case with earlier works. Instead he discovered a wider range of colors, as this work with its strong hues of a fresh orange and a rich red delivers proof of. The artist applies the smooth and soft compound over previously executed layers while he allows spaces for the ground coating to show through. Colors superimpose one another, here and there they are ruptured by swiftly scratched marks and enhanced by just few representational elements like a staffage of human figures. Any approach to a perspective spatiality is weakened by the stripe of horizon in the picture’s upper margin. This way the artist realizes an expressive and very lively structure with a primal and spontaneous character and a fascinating immediacy. All in all, it is a wonderful document of Dubuffet’s unconventional concept of art. [CH]
More Information
+
Sell
Get a free appraisal for a similar object!
+
Register for
Jean Dubuffet
+
Buying from A-Z
+
Contact a specialist
+
Jean Dubuffet Biography
Share