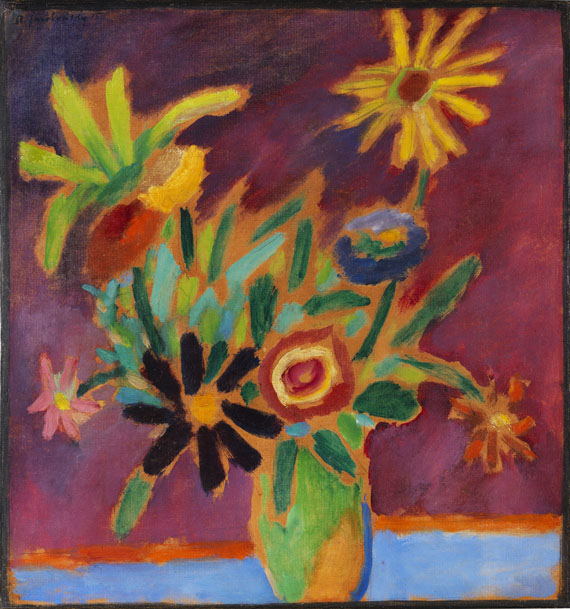 Essay
Upon the outbreak of World War I all Russian citizens were forced to leave Germany within just two days, among them also Alexej von Jawlensky. Unlike Wassily Kandinsky, who had decided to return to Moscow, Jawlensky emigrated to Switzerland where he found refuge with friends in St. Prex on Lake Geneva. With the decision to emigrate Jawlensky did not only leave a lot of personal belongings behind in Munich, it seems that he also abandoned themes and painting style that he had previously acquired. What he took with him to his new residence, however, was a style characterized by a boosted bright expressiveness rendered in playfully orchestrated motifs, a stylistic path that commenced with his stay in Bordighera in spring of 1914. This stay also saw the birth of his meaningful Variations, the first work series that would decisively coin his pictorial program. In this sense the ”Bunte Blumen“ (Colorful Flowers) are a kind of recreative intermission, a deep breath in the vast amount of his ”variations of a landscape theme“, in which Jawlensky rendered the view of the garden from his window several times a day over an extended period of time. Capturing the trees and the sky above the path leading down to the lake in a characteristic interplay of forms and colors, ”with the power of my mind and the inspiration found by the spirit of the ambient nature“, as Jawlensky wrote in his memoirs. Jawlensky painted these summery flowers in full bloom, reaching out to the light in seemingly wild gestures and in a likewise gaudy vase on a light-blue ground in front of a deep violet wall. The omnipresent strong orange tone invigorates the composition and determines the tenor of the quintessentially gaudy motif. It is not just the boisterously arranged bouquet of impetuously painted summer flowers - yellow coneflower, red zinnia, red-black Mexican aster, yellow lily, red poppy and others – that strike the observer, but also the artist’s pure zest for painting that finds expression in an insouciant performance. Jawlensky’s free spirit, his strong independence and rejection of conventions become tangible throuh these irresistibly intensive colors. [MvL]
More Information
+
Sell
Would you like to sell a similar object?
+
Register for
Alexej von Jawlensky
+
Buying from A-Z
+
Contact a specialist
+
Alexej von Jawlensky Biography
Share 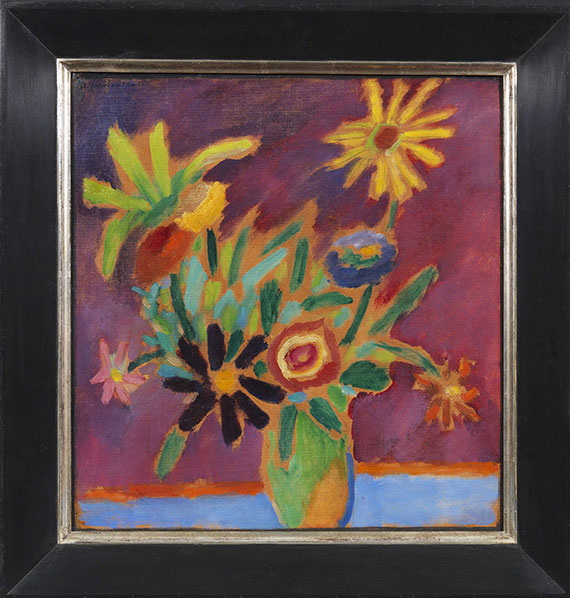 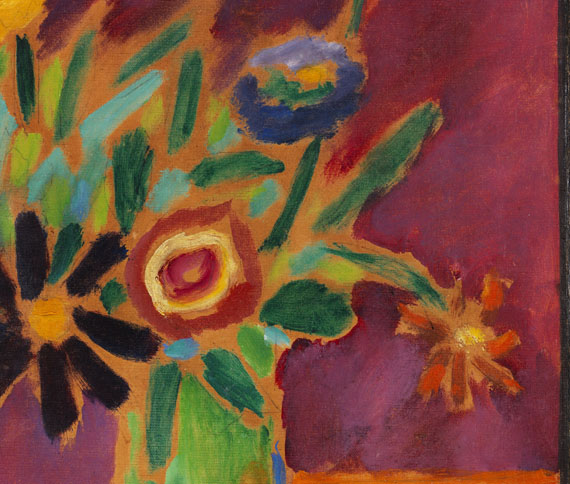