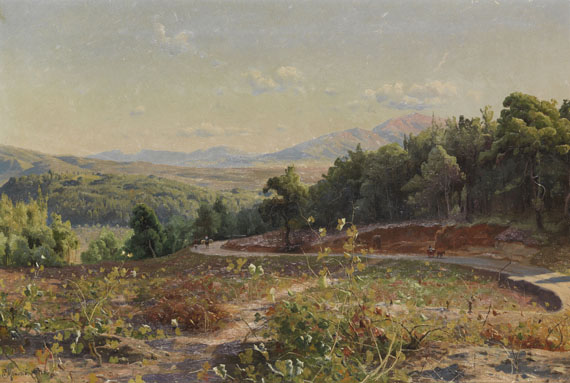 We are grateful to Mr. Hans Paffrath, Galerie Paffrath GmbH & Co. KG, Düsseldorf, for his kind support in cataloging this lot.

Essay
Mönsted made the first version of this motif, a wide view across the lowlands near the Greek town of Tatoi in 1882 (cf. Hans Paffrath: Peder Mönsted. Zauber der Natur, Düsseldorf 2013, no. 1892_28, color illu. on p. 55). This place 20 km north of Athens on the southern slopes of the Parnitha range is the royal residence and burial place of the Greek royal family. Mönsted went to Greece as part of his task as portrait painter of king Georg I. The Greek king, offspring of the Danish royal family, commissioned his fellow countryman to portray him in 1892 and invited him on a four-month cruise through the Mediterranean, which took Mönsted to Athens and Tatoi, as well as to Malta, Corsica and Egypt. The fascinating composition of our work is particularly captivating. Mönsted creates a strong depth effect through the clever arrangement of wildly growing vine in close-up in foreground and the shadowy town at the the foot of an impressive mountain range in background. Mönsted also succeeds in capturing the typical vastness of Greek landscapes in a medium-sized format. [FS]
More Information
+
Sell
Would you like to sell a similar object?
+
Register for
Peder (Peder Mørk Mønsted) Mönsted
+
Bidding Options
+
Written bid
+
Buying from A-Z
+
Contact a specialist
Share 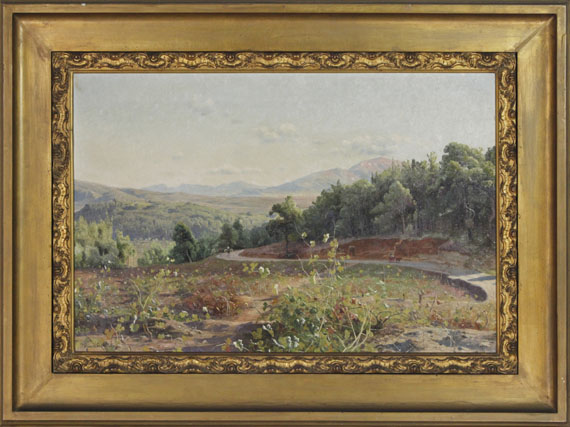 You might also be interested in
+
and all other offers
Buyer's premium, taxation and resale right apportionment for Peder (Peder Mørk Mønsted) Mönsted "Griechische Landschaft mit Weinbergen"
This lot can be purchased subject to differential or regular taxation.