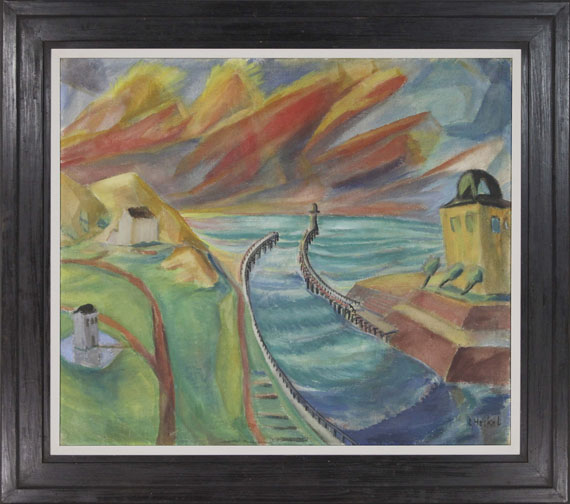 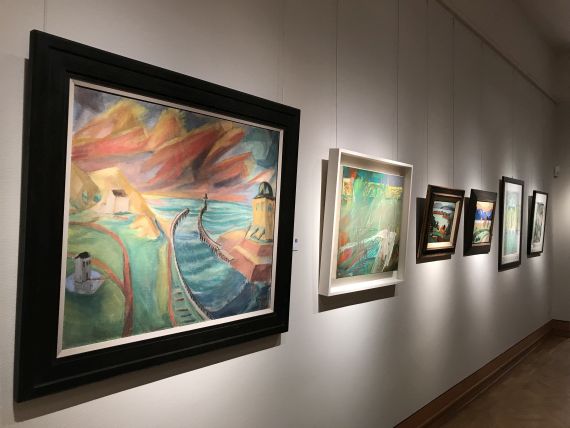 PROVENANCE: Collection Gustav Ferdinand Jung (1878-1943), Hagen (acquired before 1932, ever since in possession of the family).

LITERATURE: Sotheby’s, London, December 2, 1981, lot 142 (with illu.).
Paul Vogt, Erich Heckel. Recklinghausen 1965, no. 1916-19, p. 162 (with illu.).
"Internalizing the events and rendering reality in a new form were the goals Heckel pursued over the rousing and prolific years up until the end of World War I. These goals enabled him to gain a whole new world"
Paul Vogt, quote from: Ex. cat. Erich Heckel, Galerie Wolfgang
Ketterer, Munich, February-April 1966, no p.

At first sight this harbour entrance looks unsuspicious. Erich Heckel painted it just like many other motifs he rendered in Ostende in 1916, when the harbour town in Northern Belgium was occupied by German troops. From April 1916 on Heckel had been stationed here and he used much of his spare time to draw, paint and create woodcuts of the surroundings. Even though he had volunteered for military services as early as in 1914, he was not permitted to front line activities. Thus, he decided to train as a paramedic in Berlin. He then served in Flanders where Walter Kaesbach the scientific assistant of Ludwig Justi at the Nationalgalerie – what a coincidence – was his supervisor. Both knew and respected each other. Kaesbach ensured that Heckel’s duty-roster would leave enough free time for his artistic activities, so that he could develop both his style and his range of themes. Other artists would also benefit from the friendship with Kaesbach. To his unit belonged for instance the Berlin painters Max Kaus, Otto Herbig and Anton Kerschbauer, as well as the laywer and poet Ernst Morwitz. Heckel also became acquainted with Max Beckmann in Ostende, who had been transferred from the Eastern front line to Flanders. ”I am well aware of how fortunate I was, as I could spent most of my days at the sea as a free man. I went swimming a lot, from time to time I did a little drawing – what a favourable situation“, wrote Heckel in a letter to the Hamburg judge, art collector and critic Gustav Schiefler on 1 October 1915.
Thus, until October 1918 Heckel served his time just a few miles away from the trench warfare of the western front. It is quite remarkable that Erich Heckel was able to capture his motifs in an overall positive spirit despite all the atrocities he was surrounded by. He was fascinated by the elementary forces of the wind and the water that incessantly pounded the coast of Flanders, the play of the clouds and the rays of the sun reflecting on the water like a million flashes of lightning culminating in tremendous color explosions. This is how he paid an exceptional homage to Flanders.
In terms of war operations Ostende was a relatively quiet place for Heckel. However, it is astonishing to see with how much intensity Heckel rendered the motif, which remains almost entirely untouched by the surrounding strains: like a captain who pilots his ship through rough sea into this safe harbour protected by the pier’s strong walls and the mighty towering custom house. Remnants of the breaking waves reach far into the harbour as if the two piers in left and right can’t stop them. The sky appears in a bright sunset light, the sun above the calm sea’s yellow horizon breaks into a blazing red while the coastline still breathes its warm air. Amid the terrors of war the ”Hafeneinfahrt“ appears like a rescuing symbol, so powerful that it helped Heckel to make it through the war. Devoting himself to painting and literature and the opportunity to share this devotion with a few friends meant great luck to him.
The progressive Kestner-Gesellschaft in Hanover showed Erich Heckel's ”Hafeneinfahrt“ as early as in January 1919. In the following Heckel’s gallerist Ludwig Schames presented the work along with paintings from Otto Mueller in Frankfurt am Main. In the autumn of 1919 Hans Goltz, art dealer and pioneer of Modern Art, showcased Heckel’s “Hafeneinfahrt” at his ‘Galerie Neue Kunst’ in Munich. It is probably here that collector Gustav Ferdinand Jung from Hagen acquired the work from Goltz. Jung was born into an industrialist family in Hagen in 1878, so he had sufficient means to buy contemporary art upon visits at galleries in Berlin and in Munich. Additionally, he was in close personal contact with artists represented in his collection, among them Erich Heckel, Ernst Ludwig Kirchner, Christian Rohlfs and others. The vast collection remained in Erfurt until the death of his wife Hildegard, the sister of the sculptor Hans Walther, in 1976 and was then distributed among their children. [MvL]
More Information
+
Sell
Get a free appraisal for a similar object!
+
Register for
Erich Heckel
+
Buying from A-Z
+
Contact a specialist
+
Erich Heckel Biography
Share