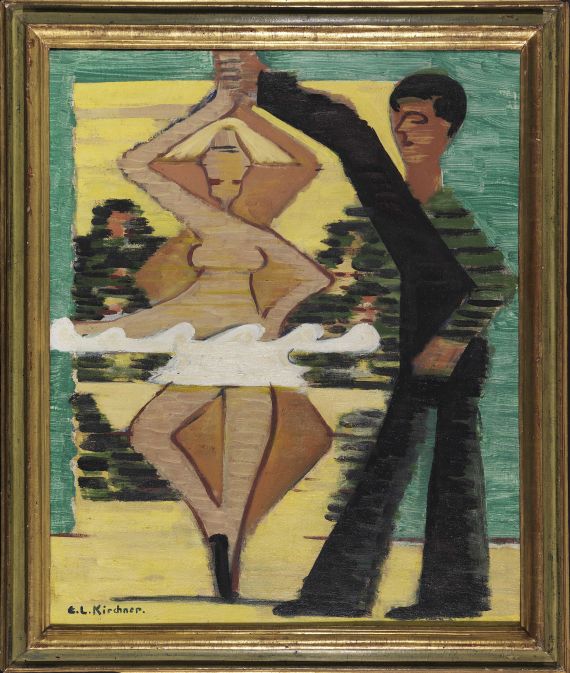 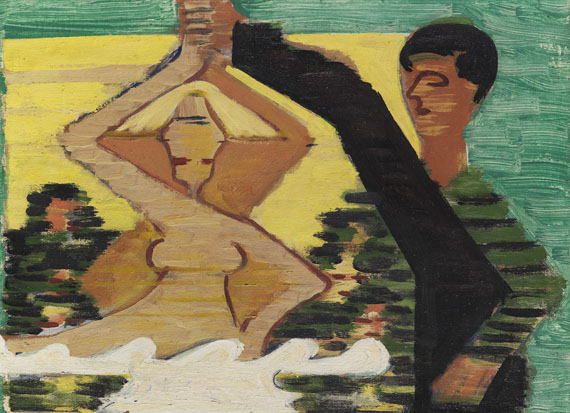 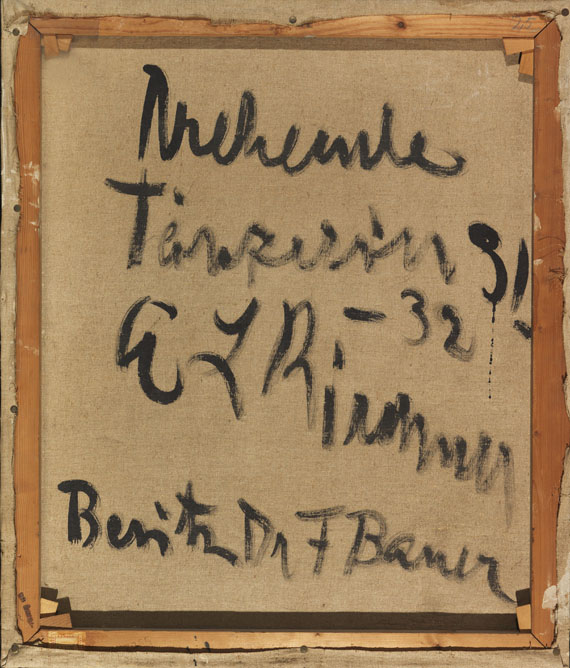 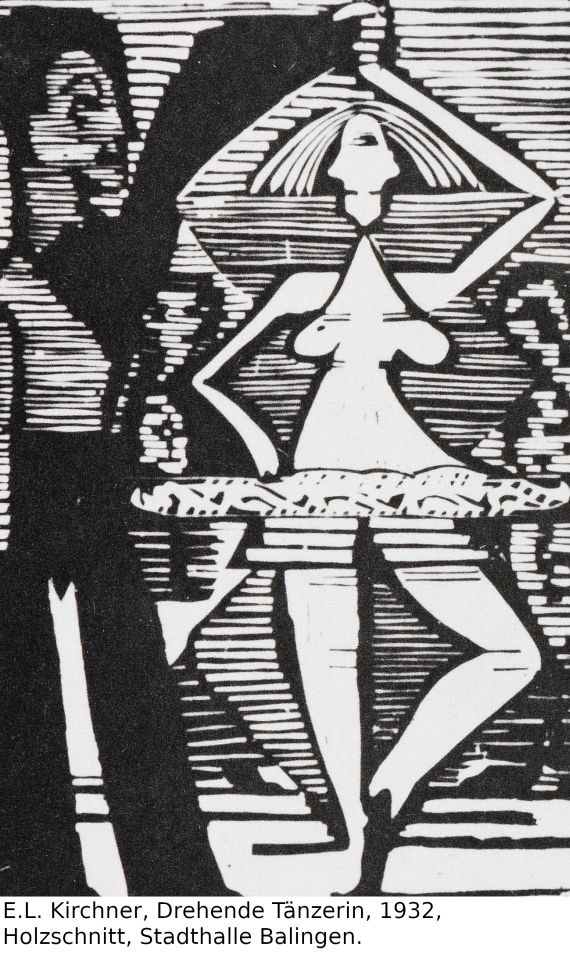 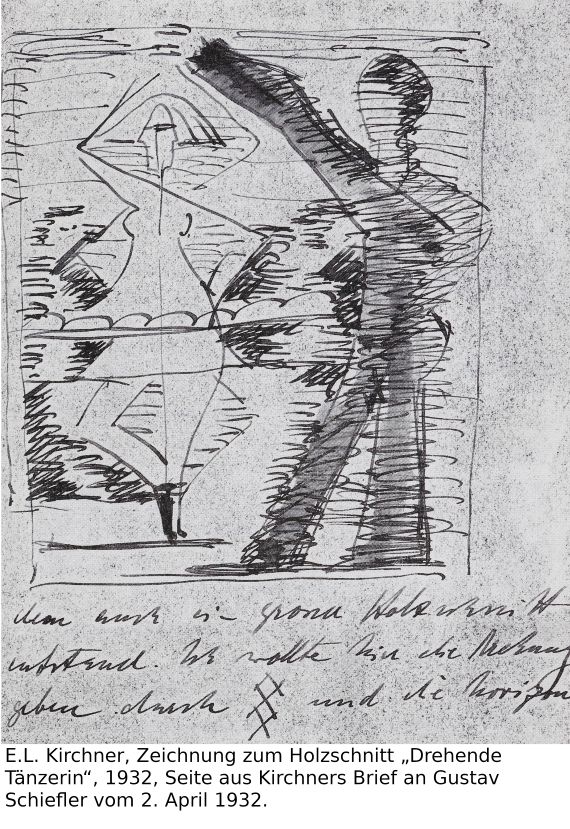 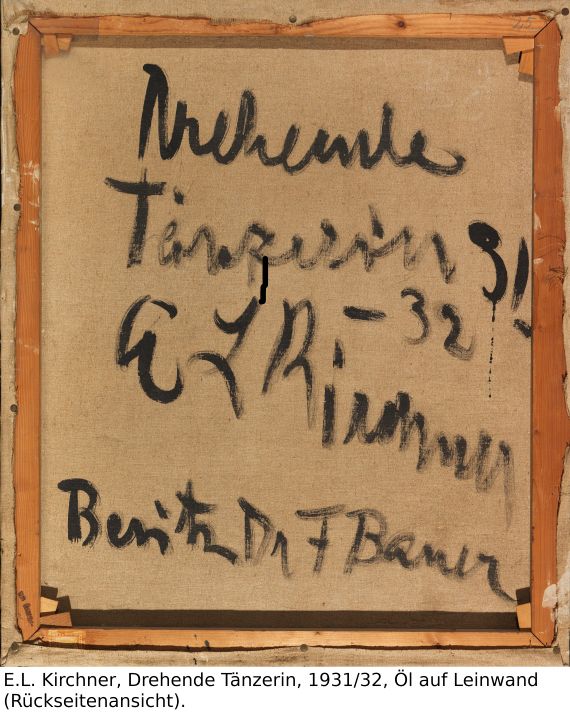 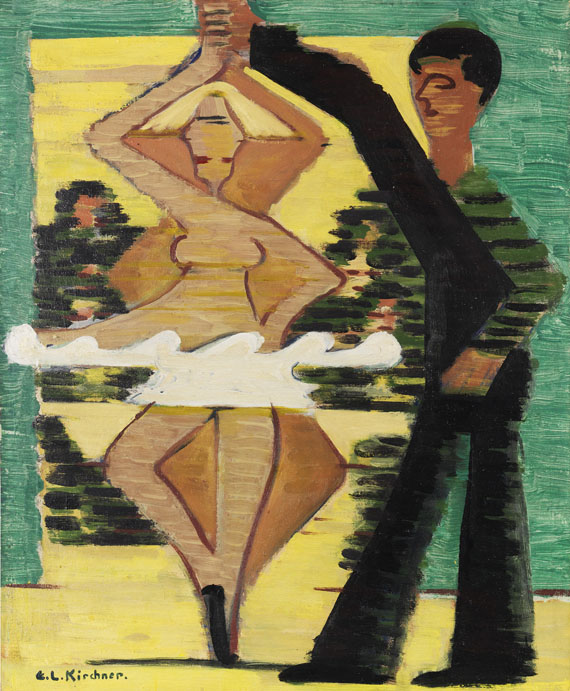 This work is documented at the Ernst Ludwig Kirchner Archive, Wichtrach/Bern.

E. L. Kirchner's fascination for dance found its way into his versatile œuvre in form of drawings, prints and paintings of dancing couples and solo dancers, the earliest works were made during his time in Dresden around 1909/10. Some of these dynamic illustrations were executed at cafés and night bars where Kirchner met with one or the other artist. In private settings he was able to study, sketch and photograph their motions. In the 1920s he even more intensively studied this diverse topic. In 1921 he met the dancer Nina Hard at a bar in Zurich, who spent several days with Kirchner at his house "In den Lärchen" in Davos/Frauenkirch. These fruitful days resulted in photographs, woodcuts, numerous drawings and even oil paintings of the occasionally entirely naked artist. In 1926 Kirchner met the free dancer Mary Wigman and her former student Gret Palucca in Dresden – the extraordinary performances of both artists inspired him so much that motion would play a key role in many of his works of the following years.
As part of the reform movement free dance found followers in Europe as early as the late 19th century. In regards to the conception it is closely linked to Modernism. In 1926 E. L. Kirchner wrote to his fianceé, dancer Erna Schilling: "This dance is such a rich source for me, it has so much to do with our modern age". Additionally, he noted in his diary: "Well, everything we always suspected actually came true. The new art is here. M. W. [that is Mary Wigman] unknowingly uses many elements of the modern pictures, and the creation of a modern concept of beauty finds expression in her dances as much as it does in my pictures." (E. L. Kirchner, quoted after: Ex. Cat. Kirchner’s Kosmos: Der Tanz, KirchnerHAUS, Aschaffenburg, September 21 – December 30, 2018, p. 50). Kirchner's fascination for dance accompanied the artist up until the end of his life. In 1925 Ernst Gosebruch, director of the newly founded Folkwang Museum in Essen, commissioned Kirchner with a mural in the ballroom of the museum annex. Even though the project was never realized, dance kept playing a key role in the 50 sketches and drawings that the artist had already made in its preparation. For organizational and financial reasons Kirchner received commissions for several oil paintings instead on which he began to work with a lot of eagerness and enthusiasm in 1930. In a letter of December 1932 to Carl Hagemann, patron of the project, Kirchner wrote: "I have a lot of things to do. I’m making large drafts for the Essen ballroom painting (2 panels 150 x 200 cm), that I would like to show in Bern. They show the color dance twice. The one like on the sketch right here. […] The other with small figures, couples dancing on color ribbons, blue-yellow, red, yellow, blue, red, purple, orange, green and a twirling dancer in white. (Unification of all colors in white). […] I hope to create something wonderful." (quote from: Ibidem, p. 65).
The pirouette performing dancer in the white dress that Kirchner painted for the draft of the mural in Essen fascinated him immensely. Thus, the artist took this subject once again up and turned it into the main sujet of the present oil painting. The depicted scene does not only capture the moment of the dance move, but develops its aspects such as the speed and spin further, which we can masterly recognise in the dancer's doubled face, the angled leg and in the wavy white upwards swirling hem of the skirt.
In a letter to Gustav Schiefler from 1932 the artist explains his intentions behind this motif by means of a wash pen and ink sketch: "I wanted to render the twirl through [two rhombs on top of each other] and the horizontal division." (Ernst Ludwig Kirchner/Gustav Schiefler, Briefwechsel 1910-1935/1938, Stuttgart/Zürich 1990, p. 679).
Before rendering the motif with so much perfection as it is the case with the impressive work offered here, Kirchner had been intensively occupied with it on many occasions, among them in a preparatory watercolor (Städel Museum, Frankfurt am Main) and a woodcut (Dube 628, Stadthalle Balingen) from the same year. [CH]
More Information
+
Sell
Get a free appraisal for a similar object!
+
Register for
Ernst Ludwig Kirchner
+
Buying from A-Z
+
Contact a specialist
+
Ernst Ludwig Kirchner Biography
Share