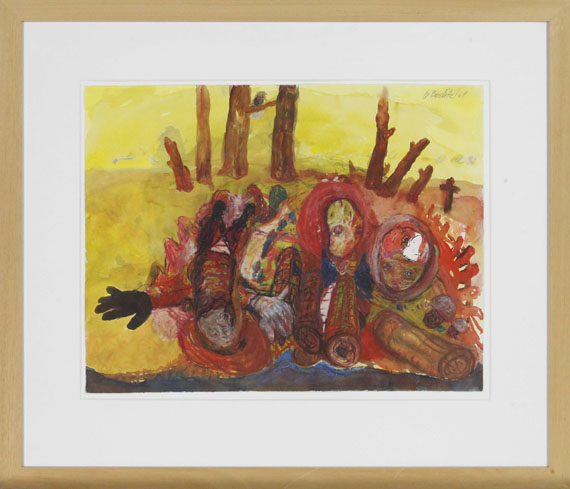 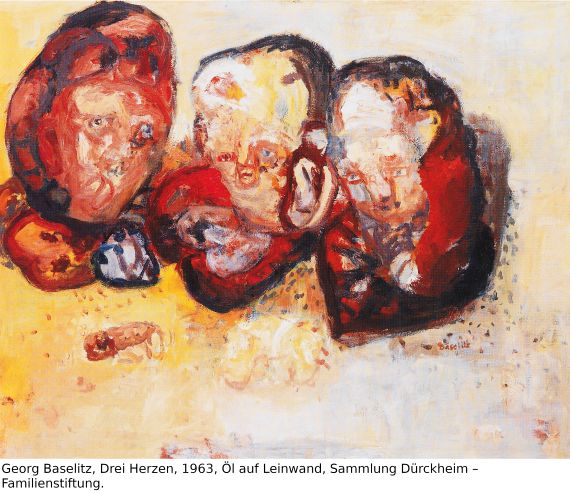 We are grateful to the Atelier Baselitz for the kind support in cataloging this lot.

Throughout his complete oeuvre Georg Baselitz examines masterpieces of art history. In doing so he attains ever new stylistic solutions. The recurrent stylistic breech shows the artist’s discomfort and skepticism with the picture as mere effigy. In the early 1960s he made the works of the so-called ‘Pandemonium’ series which express the thoughts the artist phrased in the ‘Pandemonic Manifesto’ in 1961. Works byBaselitz from those days must be understood as rebellious symbols against social conventions in the post-war years. He adapts traditional artworks that have been acknowledged by conservative art history and transforms them in his own pictorial language and imagery. They are not self-explanatory but require an associative and critical perspective. A strong expressive imprint can be observed this work here. He opens up a vast landscape in a yellowish-red palette, atypical of his works from that time, into which he embeds a group of figures in foreground. This reveals that Georg Baselitz does not reproduce reality, instead he unfolds his own pictorial reality. As mentioned, he finds inspiration in art history, as well as in more ”trivial“ sources such as the brochures issued by the ‘Saxonian Association for the Preservation of Nature’. In an interview with the magazine BASEL reports: ”These publications have become motif books for me, not just for the landscapes, but also for the rocks and crosses. They are so-called conciliation crosses. They just stand somewhere in the landscape, mostly alone, sometimes in pairs, sometimes in groups pf three….The brochures comprise a compilation of pictures of conciliation crosses and indicate their position. I made drawings of the crosses, they appeared as an important motif to me, as they are so mysterious “ (G. Baselitz December 5, 1976 in: Ex. cat. Kunstmuseum Basel 1984, p. 139 and annotation 15). These motifs are characterized by a deep ambivalence: On the one hand, they are documents from the artist’s home region, on the other hand, they no longer affect the artist as he last long lost touch with it. Baselitz also used the motif of the crosses in the work “Sächsische Landschaft“ from 1962/63, tody in possession fo the State Graphic Collection, Munich. In works from the early 1960 the figures are like a dough of kneaded paint placed in the just vaguely depicted landscapes.; the rich treatment with colors sublimates the iconographic element, which is so hard to determine for the observer. The message of our sheet, made during a stay at Wolfsburg Castle in spring 1964, reaches deep into the artist’s sensation. Works from such an early point in the artist’s career are very hard to find on the international art market. Currently the Fondation Beyeler in Basel honors his oeuvre with a grand retrospective.
More Information
+
Sell
Get a free appraisal for a similar object!
+
Register for
Georg Baselitz
+
Buying from A-Z
+
Contact a specialist
+
Georg Baselitz Biography
Share