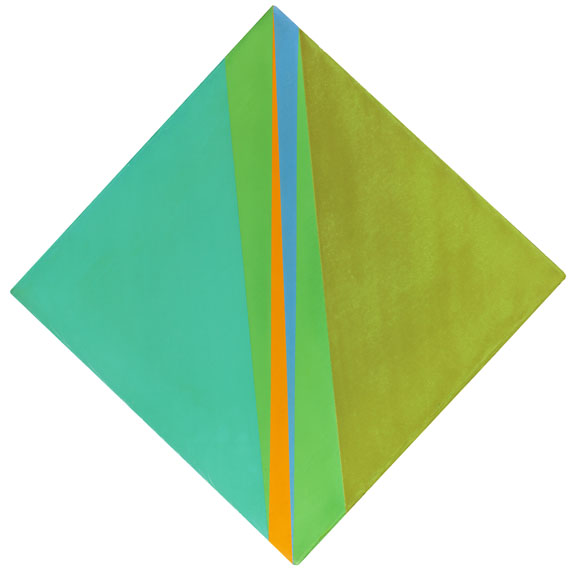 EXHIBITION: Galerie Suzanne Bollag, Zurich (verso of the stretcher with a label).

Essay
With this early work from 1964 Bill created a composition that is vexing at first sight. The title ”Intensität durch Verdichtung“ (Intensity through Consolidation) clearly denominates the picture’s content. The canvas is separated into two halves. The left half is painted in a strong opaque turquoise while the right half comes in less opaque, slightly varying shades of a light green tone. These two colors differ so strongly in terms of their surface structure, so that they provide a fascinating background for the other colors. Bill lays a broad green stripe over the expected clash of the two background colors. This stripe is covered by two acute-angled triangles that rest against one another and separate the green stripe in a way that the canvas is divided in half by four extremely acute-angled triangles that appear to have their base line outside the image. This way Bill creates the unique tension that is so characteristic of his works. At first the dense order of the narrow color fields appears to be full of motion, while a closer look reveals that the observer has to do with strictly geometrical forms. A both striking and gentle hierarchy of the color fields is the result, in comparison and juxtaposition they melt into a harmonious unity. The image surface becomes consolidated, the colors’ intensity is increased, the picture’s energy rises. [EH]
More Information
+
Sell
Would you like to sell a similar object?
+
Register for
Max Bill
+
Buying from A-Z
+
Contact a specialist
+
Max Bill Biography
Share 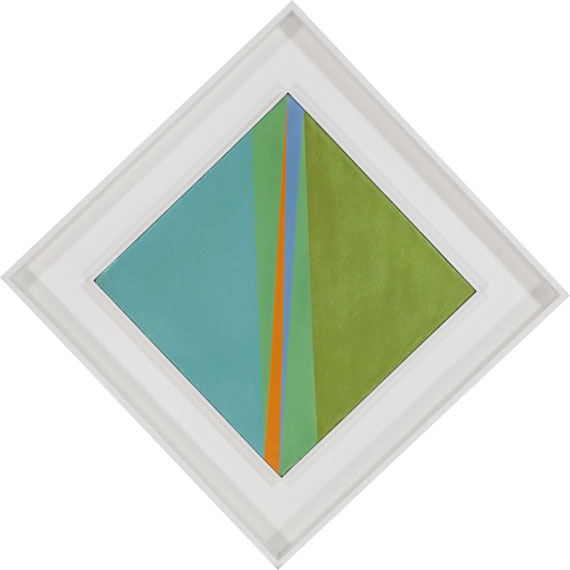