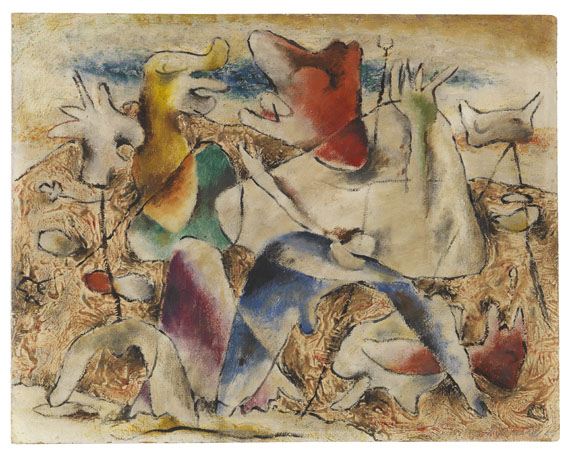 LITERATURE: Will Grohmann, Willi Baumeister - Leben und Werk, Cologne 1963, cat. no. 629 (with the title "Figurenlandschaft III").
"Willi Baumeister [..] is one of the few outstanding artists that stayed in Germany between 1933 and 1945, and who made a significant contribution to European art of the 20th century."
Spielmann/Baumeister, Willi Baumeister. Catalog raisonné, Ostfildern-Ruit 2005, text on the reverse of the wrapper

Essay
Baumeister already developed an interest in structures that loosened up the image surface and added liveliness to the pictorial ground in the early 1930s. As it is the case with the painting offered here, the structure carries a linear and graphic composition that scintillates over the pictorial ground. Primeval associations are evoked, a phenomenon characteristic of many of Baumeister's work cycles. Loosely arranged forms and color fields emanate a merry weightlessness that leaves a lot of room for associations. Musical tempi are among the most typical associations. The primeval aspect is wrapped in a burlesque vesture and looses all its graveness. The shadowy figures that gently dance across this composition add a subtle notion of humor to it. Trough the usage of synthetic resin and filling compound Baumeister creates a plastery surface effect that underlines the prehistoric character of the repertoire of forms featured here. This mystical figure composition also has an excellent provenance: It used to be part of the acknowledge collection of the Wuppertal architect, art collector and publicist Heinz Rasch, who became a close friend of Baumeister in the 1920s. Other works made during this work period in the 1940s, which includes the "Figurenlandschaften" (Figure Landscapes) and "Figurenmauern" (Figure Walls), into which Baumeister also integrated elements of African Art, are in the collections of Osthaus Museums in Hagen, the Nationalgalerie Berlin, the Staatsgalerie Stuttgart and the Museum of Modern Art, New York. [JS]
More Information
+
Sell
Would you like to sell a similar object?
+
Register for
Willi Baumeister
+
Buying from A-Z
+
Contact a specialist
+
Willi Baumeister Biography
Share 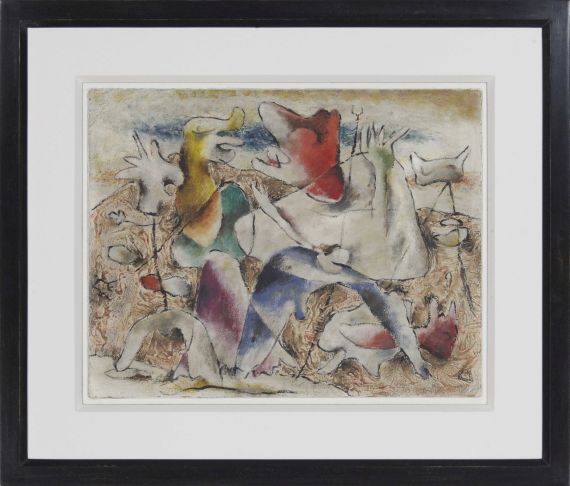