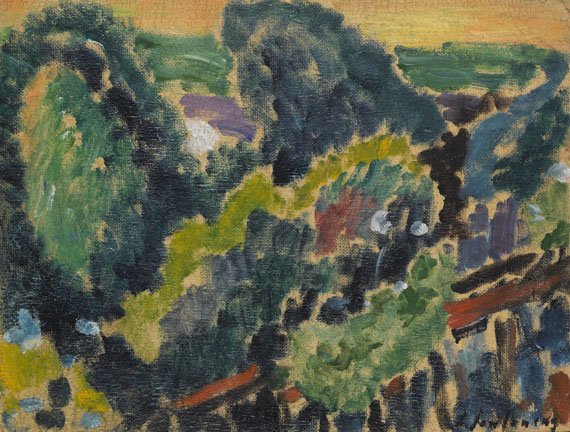 - Important work with first notions of abstraction.
- From the renowned collection of Heinrich Kirchhoff, who was honored with the grand exhibition at the Museum Wiesbaden in 2017/2018: "Der Garten der Avantgarde: Heinrich Kirchhoff - Ein Sammler von Jawlensky, Klee, Nolde..".

Essay
Alexej von Jawlensky, who had been living in Munich since 1896, was a close friend of Kandinsky, Marianne von Werefkin and Gabriele Münter. Together they founded the artist group "Der Blaue Reiter" and made decisive contributions to the art of Expressionism. Owing to his Russian citizenship he had to leave Germany when World War I broke out in 1914. He relocated to St. Prex on Lake Geneva with his family and Marianne von Werefkin. This landscape offered here was made at his place of refuge. Characterized by a continuous reduction of the representational elements without entirely abandoning all figurative reference, it is an outstanding document of his artistic development in those days of exile. "Since around 1914 the clearly structured and fully composed landscape slowly began to loose its contours while a pastose application of the subdued colors in form of blotches took over. Merely stylized pictorial elements - trees, windows and roofs - consciously taken out of any conventional compositional context, suggest landscape references" (Alexej Jawlensky. Vom Abbild zum Urbild, ex. Cat. Galerie im Ganserhaus, Wasserburg am Inn 1979, p. 5). In this work Jawlensky reduced the motif to moved groups of colors that already hint at the composition of the later Variations.
More Information
+
Sell
Would you like to sell a similar object?
+
Register for
Alexej von Jawlensky
+
Buying from A-Z
+
Contact a specialist
+
Alexej von Jawlensky Biography
Share 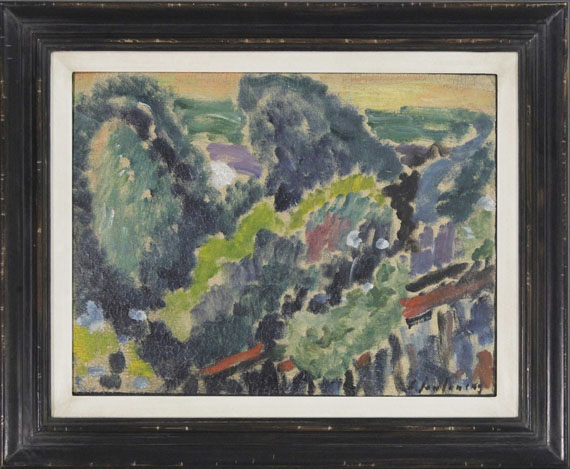