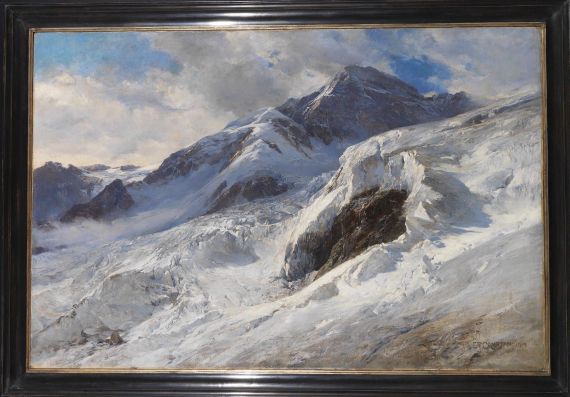 We are grateful to Dr. Jürgen Brandes, Tutzing, for his kind support in cataloging this lot.

Covered in thick clouds, the peak of the snow-clad massif in our work rises seemingly insurmountable before our eyes. Large parts of the brown-gray rocks are covered by a thick layer of ice through which the experienced mountaineer can find his way visually. The motif showsthe Monte Rosa mountain massif in the Valais Alps between Italy and Switzerland. A study by Compton, which, apart from a few details in the sky and the layer of snow, shows the same view cover was inscribed by the artist “Ch. Gnifetti 2/ VII/ 92”[?] sowie “Lyskam[m] (Monte Rosa) von der Sellahütte aus”. This motif, probably executed in July 1892, names the two stations "Gnifetti-Hütte" located on the southern side of the Monte Rosa massif, as well as the "Quintino Sella hut", which are connected by a pass. The Sella hut is the starting point for the ascent to the Castor peak and the Lyskamm shown here. Compton made our work in a typical manner, plastically working the snowcapped rocks of the high mountain glacier out of the background by superimposing several layers of paint. The result is a dramatic impression of nature that directly affects the observer, allowing him to take on the role of the daring mountaineer in the wind and ice-covered landscape. [FS]
More Information
+
Sell
Get a free appraisal for a similar object!
+
Register for
Edward Theodore Compton
+
Buying from A-Z
+
Contact a specialist
+
Edward Theodore Compton Biography
Share