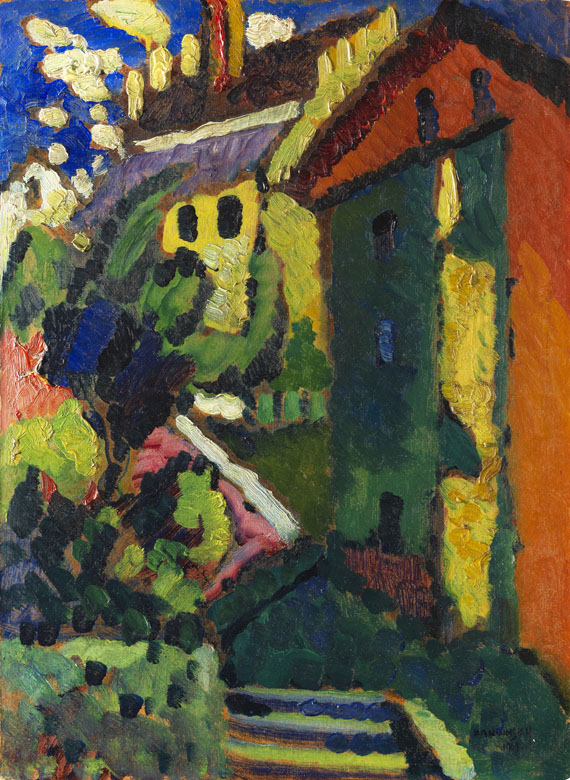 • Spectacular rediscovery after 100 years.
• Exhibited in Kandinsky's first seminal solo show.
• Herwart Walden's statement on mentioned exhibition in 1912: "The strongest that Europe has to offer today."
• Family property for more than 90 years.

LITERATURE: La Revue du Feu, Amsterdam, Devember 1919, illu. on p. 62 (as "Collection A. Petronio").
"La Revue du Feu", in: Tweede Blad der Provinciale Overijsselsche en Zwolsche courant, January 7, 1920, no. 5, no page (as: "een straatje in een berg-dorp" ["mountain village road"]).
"A painter who finds no satisfaction in the mere representation of natural phenomena, however artistic, who strives to create his inner life, enviously observes the simplicity and ease with which such an aim is already achieved in the non-material art of music. It is easily understandable that he will turn to this art and will attempt to reciprocate it with his own."
Wassily Kandinsky, Über das Geistige in der Kunst, 2nd edition, Munich 1912, p. 37.
"Likewise, colors should be used not because they are true to nature but only because the color harmony is required by the paintings individually. The artist is not only juistified in usikng any form necessary for his purposes, but it is his very duty to do so."
Wassily Kandinsky, Über das Geistige in der Kunst, 2nd edition, Munich 1912, pp. 115-116.

Wassily Kandinsky’s bright and colorful painting "Treppe zu Schloss" (Stairs to the Castle) from 1909 is a particularly fine example from his expressive early artistic period as well a spectacular recent rediscovery: Since it was on display at the renowned Berlin gallery "Der Sturm" in September 1916, the work has not been accessible to the public. ”Treppe zum Schloss“ is a truly sensational discovery, as it takes up a key position in Kandinsky’s remarkable artistic oeuvre as well as within the development of modern art in general. The picture was painted during Kandinsky’s second stay at Murnau. A time defined by dissolving forms and a free and powerful play of colors – signs of the artist’s path to abstraction. This art-historically relevant process, which starts out with Kandinsky’s "Impressionen" (impressions), "Improvisationen" (improvisations) and "Kompositionen" (compositions) and ends with his famous abstract "Komposition VII" (1913), is in terms of its composition similarly arranged in the painting "Berg", also from 1909, today in the collection of the Lenbachhaus in Munich.
When comparing the airy composition "Treppe zum Schloss" with the picture "Murnau - Häusergruppe" (Städtische Galerie im Lenbachhaus, Munich) painted in summer 1908, or with the two views of Kochel from February 1909, which are slightly more cloudy in terms of color application (also at Städtische Galerie im Lenbachhaus), it becomes obvious how in Kandinsky’s "Treppe zum Schloss" form and color become independent and how little importance aspects like a correct perspective and spatial depth had, while the colors – still having representational relevance – already break into colored fields. It is not the stairways leading up to Murnau Castle that is the work’s central pictorial motif. The latter serves more as inspiration for a liberated concept of forms and colors, which may remain representational while already opening up to a more abstract level of perception. The artworks makes apparent the decisive step in Kandinsky’s artistic development to abstraction.
A Picture and its Sound
Furthermore, “Treppe zum Schloss“ is a picture that casts light on the innovative interplay of Kandinsky‘s creation with another artistic genre: Music. Painted during an era characterized by a young and progressive generation that pushed the boundaries between the arts. Wassily Kandinsky, a close friend of the avant-garde composer Arnold Schönberg, was one of the main protagonists of this groundbreaking development. For him synaesthetic entanglement of visual arts and music was far more than just an analogy. It meant a spiritual-aesthetic ultimate principle to Kandinsky.
In Kandinsky's painterly oeuvre this concept found expression in the subjective contrasting effects of forms and colors. His “musical“ approach to creating a composition becomes particularly obvious in the work “Impression III (Konzert)“, which he painted after experiencing a Schönberg concert: A sound experience in form of a picture.
However, two years earlier something very similar appeared in “Treppe zum Schloss“: The seemingly upwards moving forms of cool shades of green at the left hand side create a lively rising crescendo. It powerfully resounds in the color chords of the houses and fades away in the yellow clouds in the blue sky.
A “musical“ Provenance
Perhaps “Treppe zum Schloss“ had already early been regarded from this perspective. As the progressive Berlin gallery “Der Sturm“, which owned “Treppe zum Schloss“ from 1912 to 1919, did not only exhibit paintings, but also organized concert evenings and musical soirees. While living in Berlin, the musician and music journalist Paul F. Sanders, later owner of the picture, was a regular visitor of these events, where he became acquainted with Arnold Schönberg and perhaps also saw “Treppe zum Schloss“ for the first time.
However, it would take several years until he could finally call the work his own. Initially it got – apparently through the agency of Paul Citroen, artist and “Sturm-Representative“ in the Netherlands – into the hands of a fascinating musician: Arthur Pétronio. Just as it was the case with Kandinsky, whom Pétronio deeply admired, the violinist was also on a quest for a new universal language of art that combines sound, word and picture. A number of artists where in the audience when the first works in the new style of “Verbophony“ premiered in Amsterdam in 1919 – one of them was Wassily Kandinsky. Full of pride Pétronio presented “his“ Kandinsky “Treppe zum Schloss“ a little later in the newly-created “universalist“ magazine “La Revue du Feu“.
The young Paul F. Sanders soon learned that the picture was in possession of his fellow musician Pétronio, as a copy of the afore-mentioned “Revue du Feu“ included a photo of “Treppe zum Schloss“ remained preserved in his estate. However, it would take a couple of years until Sanders would be able to buy the work at auction in Amsterdam, presumably from the small auction house “De Zon“ around 1930.
Rescued and Preserved
The Jewish musician Sanders, who supported artists that had fled Germany for Amsterdam, was forced to go underground himself when the National Socialists invaded the Netherlands. Thanks to the help of his close friend Willem Sandberg, a Dutch “National Hero“ and later director of the Amsterdam Stedelijk Museum, Sanders was able to hide his art collection from the Nazis. When Sanders eventually moved to New York in 1946 as correspondent of the Dutch daily “Het Parool“, he took “Treppe zum Schloss“ with him. The work had accompanied Paul F. Sanders through dangerous times and hardships, and remained in possession of his descendants up until today.
More Information
+
Sell
Get a free appraisal for a similar object!
+
Register for
Wassily Kandinsky
+
Buying from A-Z
+
Contact a specialist
+
Wassily Kandinsky Biography
Share