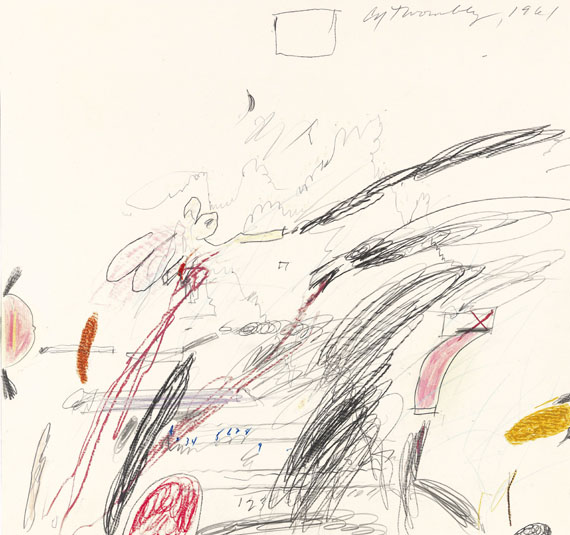 Important work from the significant series "Wolkenstein"
Notable provenances: Galleria d’Arte La Tartaruga and Galerie Zwirner were among the first galleries in Europe that sold works by Twombly
Other works from the series are in possession of, among others, the Bayerische Staatsgemäldesammlung and the Museum Brandhorst, Munich
Family property for more than 50 years.

The work will be included into the addenda of the catalog raisonné of drawings. We are grateful to Mr Nicola del Roscio for his kind expert advice.

Cy Twombly benefitted from the fact that he lived on both shores of the Atlantic and, in particular, on the Mediterranean. That made him not only an American or European artist but bestowed upon him one of the rarest gifts: the possibility to continously renew his art in a creative way up until the end of his life.
Nicola del Roscio, quote after: Cy Twombly: Drawings: Catalog Raisonné, vol. IV, p. 10

Essay
Cy Twombly grew up in Lexington. His talent for art began to show at an early point and he received private art lessons from Pierre Daura, a Spanish artist, who would familiarize him with European art. Twombly studied at the Museum School of Fine Art Boston, Lee University in Lexington and the Art Students League in New York. By invitation of Robert Rauschenberg Twombly attended Black Mountain College in North Carolina. The acclaimed art school with an experimental educational concept had decisive influence on late 20th century art movements in America. The list of students participating in the school’s summer classes reads like the "who is who" of the American avant-garde. Through the contact with Franz Kline and Wilhelm de Kooning, the ideas of Abstract Expressionism had increasing impact on his art, at the same time the genral interest in this art movement also grew in Europe. Owing to the cooperation between American and Roman art traders in the early 1960s, American Art of the 1950s became well-known in Europe literally over night. Pollock, de Kooning, Kline, Rauschenburg and Twombly showed their works in Rome in frequent intervals. In 1952 Cy Twombly visited the Eternal City for the first time, five years later he would eventually settle in Rome for good. In spring 1958 he had his first solo show at Galleria Tartaruga. His relocation to Rome is considered another milestone in his artistic development. Mediterranean culture would become an infinite source of inspiration and henceforth was the leitmotif of his art. On his quest for the roots of occidental culture he traveled to, among others, the island of Ischia, Greece and Tyrol. In 1959 Cy Twombly married the Italian aristocrat Luisa Tatiana Franchetti in New York. The newly-wed couple moved into a Palazzo on Via di Monserrato in one of the Eternal City’s most lively cultural centers. Even though he was husband and father, his son Alexander was born in December 1959, he still enjoyed the liberties of traveling, Our drawings were made at ‘Schloss Wolkenstein’ one of the estates in possession of his wife’s wealthy family. Shortly after this drawing was executed in July 1961, the Galerie Rudolf Zwirner organized Twombly’s first solo show in Germany in the fall of 1961.
More Information
+
Sell
Would you like to sell a similar object?
+
Register for
Cy Twombly
+
Buying from A-Z
+
Contact a specialist
+
Cy Twombly Biography
Share 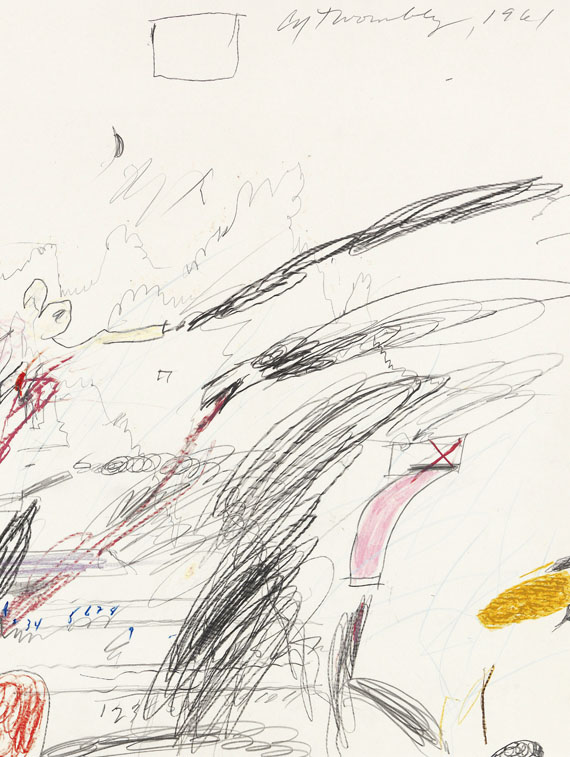 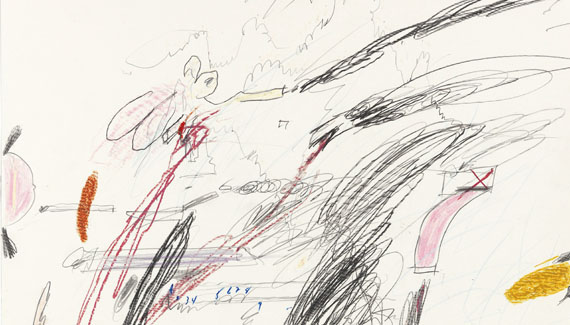