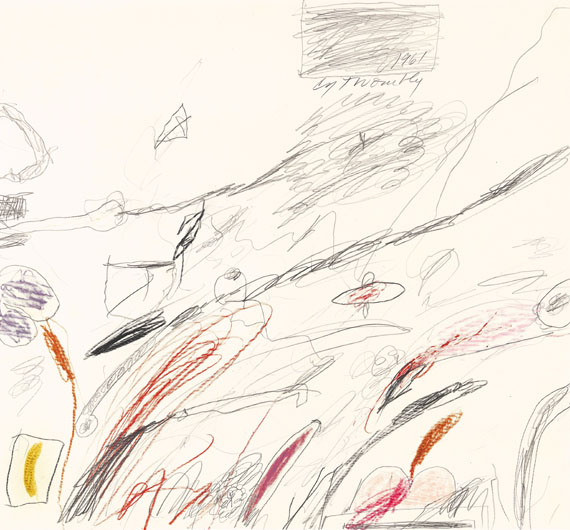 Important work from the significant series "Wolkenstein"
Notable provenances: Galleria d’Arte La Tartaruga and Galerie Zwirner were among the first galleries in Europe that sold works by Twombly
Other works from the series are in the collection of, among others, the Bayerische Staatsgemäldesammlung and the Museum Brandhorst, Munich
Family property for more than 50 years.

The work will be included into the addenda of the catalog raisonné of drawings. We are grateful to Mr Nicola del Roscio for his kind expert advice.

"In the early sixties, hower - and through the decade- Twombly' s creative energy erupts, turning out an extended series of untitled compositions in which pictograms and ideograms - many, but not exclusively, sexua l- swim and seethe in a broth of jittery action."
Simon Schama, quote after Nicola del Roscio (editor), The Essential Cy Twombly, 2001, p. 12

Essay
Next to Robert Rauschenberg and Jasper Johns, Cy Twombly is one of the most important members of a new generation of artists that superseded Abstract Expressionism in America. In early works from the 1950s, Twombly, who saw Kline and Paul Klee as main sources of inspiration, explored the scope of a gestural-expressionist brushwork. He conceived a sensitive network of signs, words, numbers and representational fragments. Despite the delicateness that is so typical of his pictorial elements, he attained an expressiveness that is unrivaled in terms of monumentality. Twombly’s works are not easy to decipher, an infinite number of hidden codes pile up and seem to form a sort of protective barrier behind which the artist hides from interpretations. At first sight the eye of the beholder discovers a conglomeration of details like numbers and signs, calligraphic pictograms, gestural lines and spotted color bodies, and tries to find hints for their decryption. Obscene and trivial motifs make his art provocative, rebellious and unexpected, however, all in line with the spirit of the time. His drawings are both playful and aggressive just as they are impulsive but also calculated. Twombly uses so much strength when making his drawings that the grain of the table pushes through and leaves traces on the sheet. One can feel how inspiration erupts as a physical force while his filigree line compositions are characterized by an airiness that helps him to an own and powerful pictorial language. The tenderness of the lines is emphasized by the integration of the paper's light crème background and stands in strong contrast to the rough pictorial elements. This way Twombly realizes a composition so exciting that it provokes the observer to “read” his art.
More Information
+
Sell
Would you like to sell a similar object?
+
Register for
Cy Twombly
+
Buying from A-Z
+
Contact a specialist
+
Cy Twombly Biography
Share 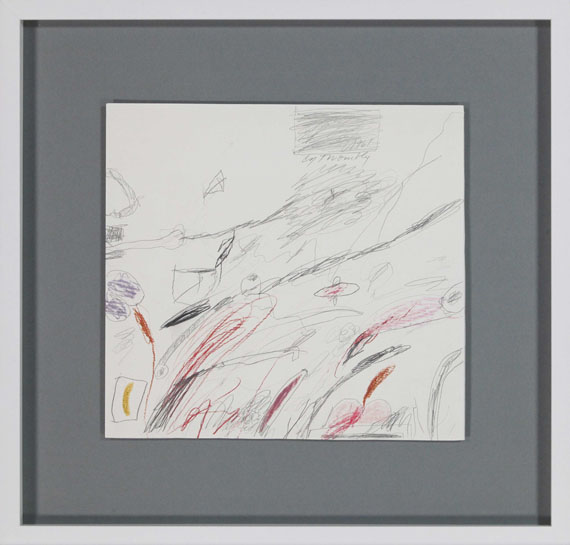 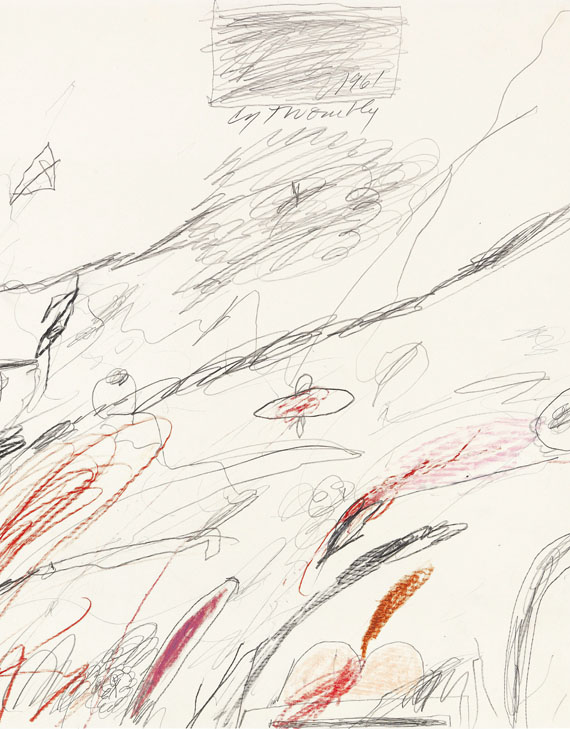 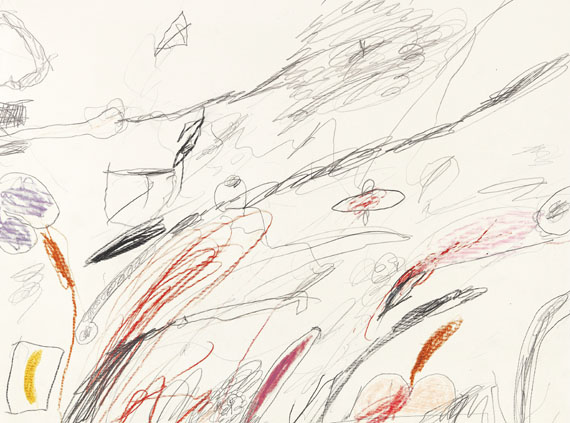