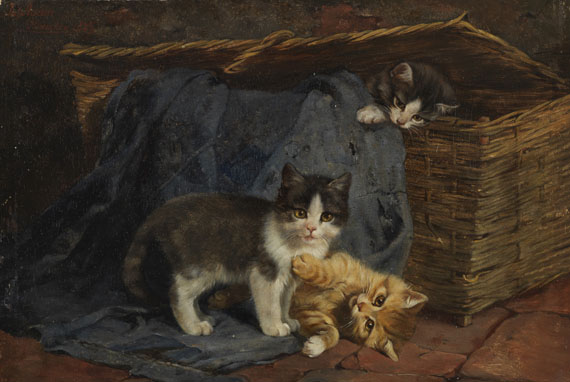 Essay
Julius (II) Adam was born son of the lithographer and photographer Julius (I) Adam and grandson of the animal and war painter Albrecht Adam in Munich on May 18, 1852. He entered his father's business at an early point and was trained as photographer. At the age of fourteen he went to Rio de Janeiro and stayed for six years. He worked as a landscape photographer and retoucher. After his return in 1872, Adam began studying at the Munich School of Applied Arts under Michael Echter and in 1874 he transferred to the Nature and Landscape class at the Academy. In the following years he mainly studied with Wilhelm von Diez. After the death of his father, he took on odd jobs, such as poster designer and wood engraver in order to support the family financially. Until 1882 the artist mainly devoted himself to genre painting, deliberately abandoning the depictions of animals that prevailed in the Adam painter family. In the mid-1880s, however, a picture of a cat he had made was so well received by the Munich Kunstverein that he began to devote himself almost exclusively to cat painting. Thus, the artist became known among his contemporaries as "Cat Raphael" or "Cat Adam". He worked on the same subject with consistently high artistic standards, combining the precise light and color observations of the Diez school with great empathy for the portrayed animals. Several of his paintings were awarded the Golden Medal at the International Art Exhibition in Munich. Julius (II) Adam died in his hometown on September 23, 1913. He occupied a significant position among the Munich animal painters of the Wilhelminian era. [FS]
More Information
+
Sell
Would you like to sell a similar object?
+
Register for
Julius II Adam
+
Buying from A-Z
+
Contact a specialist
+
Julius II Adam Biography
Share 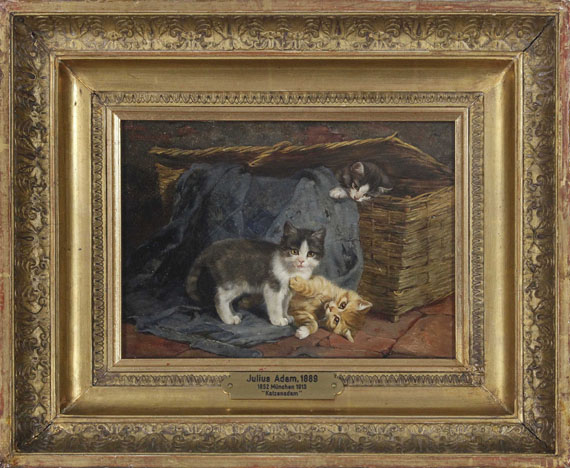