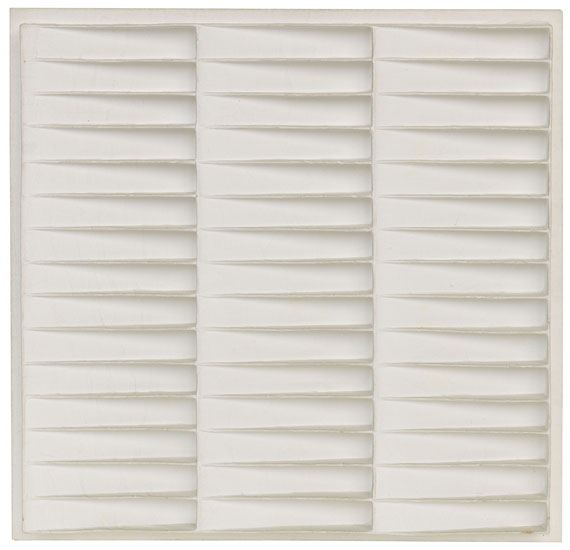 Schoonhoven's white reliefs from the 1960s and early 1970s are the artist's most sought-after works on the international auction market.

This work's authenticity has kindly been confirmed by Mr. Antoon Melissen. We are grateful for his kind expert advice.

"Schoonhoven's work "R 70-1" is characterized by the repitition of a small rectangle that tapers in the third dimension. By playing with the supposedly perfect geometry of the three horizontal zones, the artist adds visual vibrancy to the picture. It gains its energy from the stress field between the filigree approach and the divergence of ever the same." (Dirk Pörschmann, Schoonhoven expert)

Essay
Schoonhoven was fascinated by the serially made relief for its meditative aspect which plays a role both in the process of making as well as when observing it. Schoonhoven’s minimalist monochrome creations contributed to his reputation as one of the most important artists of Dutch Post War Art and also earned him a rank as one of the most popular protagonists of the European "ZERO" movement. In this work here 45 rectangles are organized in three vertical columns and form a harmonious square. The radical reduction to a pure white, the result of a long process, enables the light to unfold its play of light and shade in the strict structure of the relief. "The white reliefs are three-dimensional and hence tangible objects. They are objects to such a degree as they are what they are, meaning they neither represent nor imitate anything that they are not. [..] Schoonhoven’s white reliefs are serial systems, usually consisting of a grid surface with a number of identical or equivalent spatial recesses. The repetition of the same makes for the serial aspect.“ (Max Imdahl, quote from: Künstler. Kritisches Lexikon der Gegenwartskunst, edition 9, p. 7) Schoonhoven’s minimalist reliefs allow the observer to experience what the art historian Max Imdahl calls "knowing seeing": Seeing as a fundamental aesthetic experience that is free from recognizing any sort of known object. This work here is a particularly fine example of Schoonhoven’s mode of operation. Owing to the implementation of inclined surfaces, a feature that is a determining factor for the entire composition, Schoonhoven succeeds in adding optical rhythm to the depth effect of his characteristic rectangular structures. Accordingly, this work also invites the observer to embark on an optical expedition and to rejoice in a strictly geometrical and yet changeful appearance that does not offer the slightest hint of any figurative association. All in line with Schoonhoven’s words from 1985: "Objectivity is simple geometry. We all know what a square is, or a rectangle. It’s simple. There is nothing to question." (Quote from: Kritisches Lexikon der Gegenwartskunst, p. 15) [JS]
More Information
+
Sell
Get a free appraisal for a similar object!
+
Register for
Jan Schoonhoven
+
Buying from A-Z
+
Contact a specialist
Share 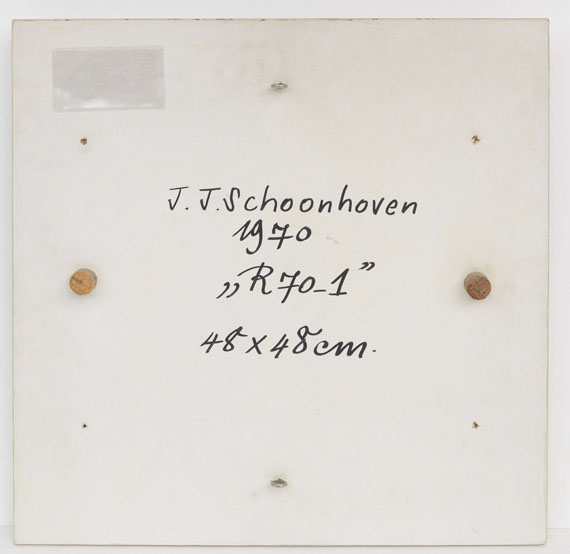