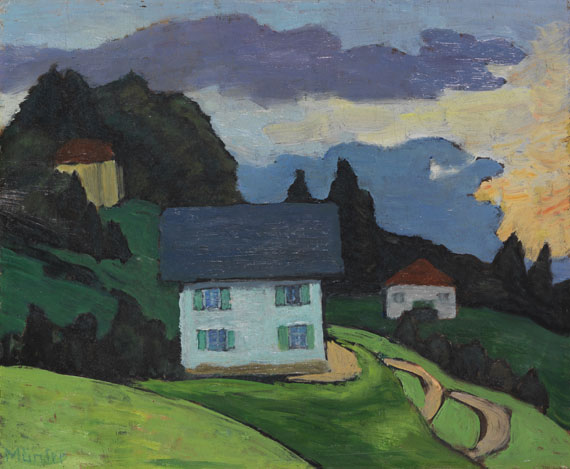 Atmospheric view of the Lower Alps near Murnau .
The work has been presented to the Gabriele Münter- and Johannes Eichner- Foundation. The expertise was not at hand before printing.

"In her later period of creation in the 1940s Gabriele Münter takes up motifs from her "Murnau years" again. Back then (1908 to 1913) she explored her pictorial means of expression with Kandinsky. In her later paintings she adds a slight notion of melancholia to the motif; the atmosphere is more reserved and calmer. These pictures seem like a dreamy perspective onto her own earlier works."
Prof. Dr. Helmut Friedel in May 2018

Essay
In the the 1930s and 40s Gabriele Münter was living seclusively in her house in Murnau. After she had attained a compact-realistic style in the early thirties, the landscape around Murnau and her domestic surrounding were her main source of inspiration for the subjects of her paintings. The composition is no longer determined by the colors' sharp contrasts, instead she follows the spirit of nature in rather soft and modest accounts. In this case it is the special atmopshere of th evening that emanates an almost magical feel. The special contours, characteristic of her early expressive works and result of her occupation with glass painting, are slightly concealed by the colors of the bordering fileds. Harsh contrasts disappear and give room for a more moderate view. During those years Gabriele Münter created works of art that completed her oeuvre in a very meaningful manner. [KD/EH]
More Information
+
Sell
Would you like to sell a similar object?
+
Register for
Gabriele Münter
+
Buying from A-Z
+
Contact a specialist
+
Gabriele Münter Biography
Share 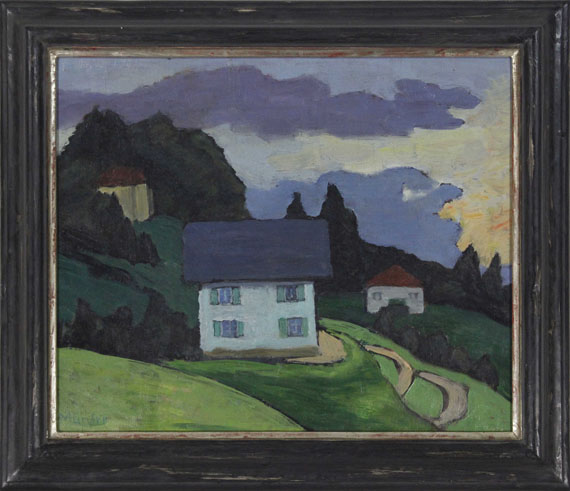