"The first gush of paint onto the empty canvas is not decisive for everything else, but it is reason enough to continue."
Fred Thieler, quote from: Kritisches Lexikon der Gegenwartskunst, p. 15.

Essay
Thieler ascribes an extreme and subjective mode of action to the modern artist. Extreme, because the artist works unsecured and with neither standards nor expectations. Subjective, as he neither has nor needs academy-approved ingredients. This type of artist does not have to meet any principles or standards. This is how Thieler created an oeuvre that is entirely free and non-representational. He wants to fire the observer's imagination with his pictures and inspire him to compile own qualifying findings. His painting proves to be open for a reflecive consideration of world, society and nature, however, without any ideological restrictions. The process of creation of his pictures seemsto be coined by coincidence, arbitrary and uncontrollable. But the artist conducts the paint by thinning it and pouring it onto the canvas, determining the course of the streaks by moving the canvas up, down or sideways. By applying it with sponges, pressing it, dripping it or even soaking it back into the sponge again. This leads to surprising formations, unintentional results come into existence and unconscious aspects appear. He employs certain colors – black, red, blue, white – to create oppositional and differentiate color effects. Owing to the use of just a few colors he always knows what will happen and how to guide them – this relativizes the principle of coincidence for the process of making. Conceived as a frieze, this painting is particularly captivating for its monumentality and the blaze of colors that it offers the observer. [CE]
More Information
+
Sell
Would you like to sell a similar object?
+
Register for
Fred Thieler
+
Buying from A-Z
+
Contact a specialist
+
Fred Thieler Biography
Share 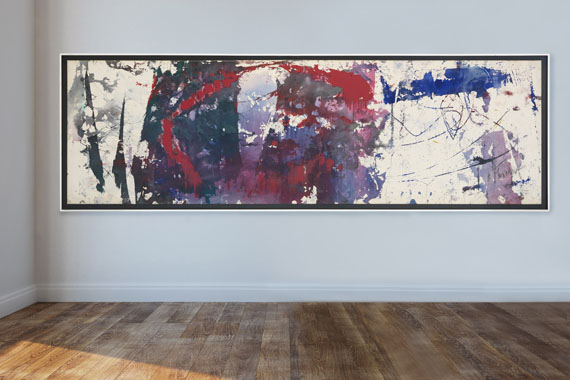