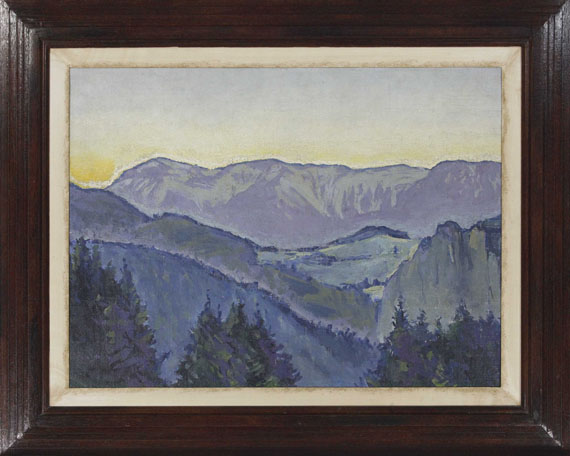 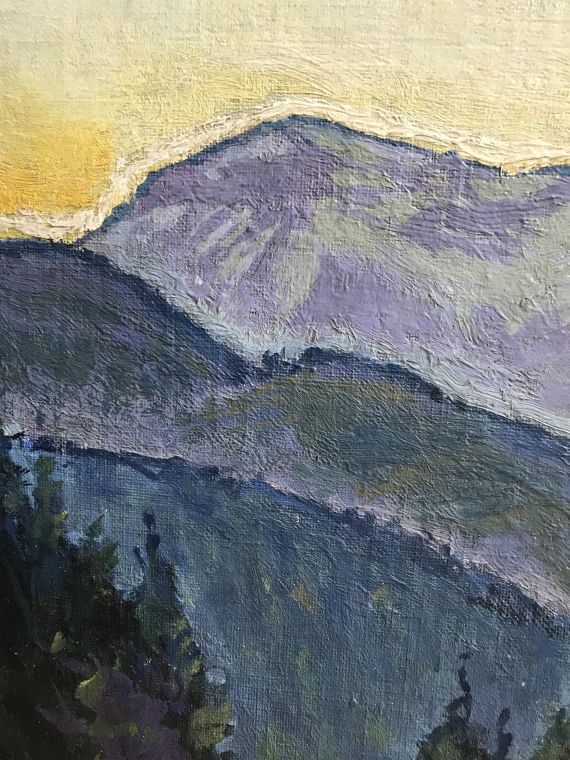 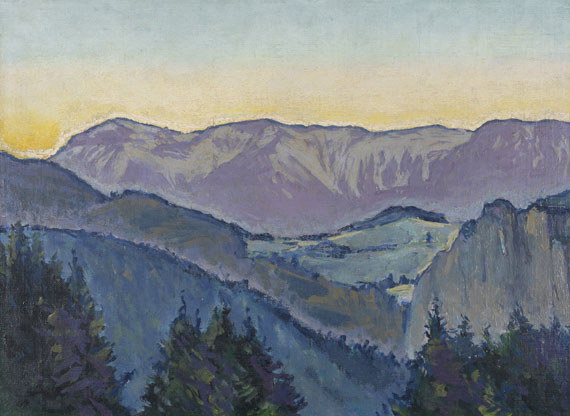 The impact of Viennese Art Nouveau on the development of Austrian and international art is tremendous. The protagonists, among which Koloman Moser also counts, had an entirely new form of creation in mind. Part of this revolution was a new perspective in painting, the rejection of a Realism that had been brought to perfection as a result of the late 19\\up6 th century and the quest to express new and symbolic meaning. Pursuing aforementioned quest, the painting of those days was characterized by simplified ornamental forms, as well as by a new and more two-dimensional view of things. The discovery of light in painting, particularly in landscapes, had reached an early peak with Claude Lorrain in the 18\\up6 th century and was continued by Turner and Delacroix in the 19\\up6 th century, and eventually gained fundamental importance in early 20\\up6 th century painting. The magic light, which is also actual carrier of content in this bright mountain landscape, was a heart matter to Koloman Moser and his contemporaries. Ferdinand Hodler, who visited Koloman Moser in Geneva in April 1913, also saw and painted his Swiss mountains in this sense, adding a mystical-symbolistic expression to them. The reason for the meeting with Hodler was Moser’s deep interest in the artistic examination of question regarding color phenomena. This meeting was probably responsible for the decisive turning point in Moser’s painting in 1913. Entries in Moser’s notebook show both admiration and a critical occupation with the pictorial creation of his artist colleague. This view of Hodler’s oeuvre becomes most obvious in Moser’s critical perspective of Hodler’s concept of "Parallelism", that is the paratactic repetition of forms and colors, which is particularly characteristic of Hodler’s figural compositions. Accordingly, Moser wrote in an entry in a notebook in 1913: "No matter how much I like Hodler – his Parallelism is enough reason not to [.]" (quote from Pichler, p. 17). The soft color modulations in his works and the strictly graphic orderliness of the contours have clear influence on Koloman Moser’s new style, particularly with regards to the increased color effect and the reduced interior contours – as our bright blue mountain formation delivers impressive proof of. Another view of the Rax landscape, also made during this decisive work period, which Moser captured in same format and respective coloring, is in possession of the renowned collection of the Leopold Museums in Vienna. This picture of a mountain panorama glowing in evening light visualizes the inexplicable and sublime by means of a treatment of color and form taken to a new level, a level far from a realistic perspective. The craggy mountains of the Rax region in the Eastern Alps and the way Koloman Moser saw them is especially interesting in two regards. As landscape study with an increased magical color effect and symbolic meaning, but also simply as a very realistic mountain view. [KD/JS]
More Information
+
Sell
Get a free appraisal for a similar object!
+
Register for
Koloman Moser
+
Buying from A-Z
+
Contact a specialist
+
Koloman Moser Biography
Share