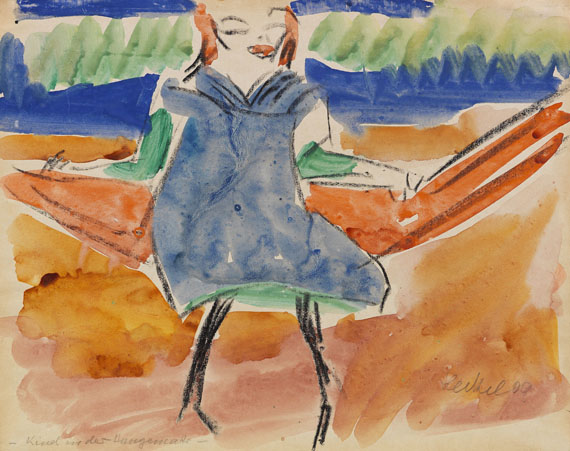 "Subsumed under the denominations 'Brücke' and 'Expressionism' and connected with the forms of expressions that were typical of his own youth, Erich Heckel made the early works incunables of 20th Century Art and opened up new artistic perspectives to the watercolor."
Werner Mayer, in: Ex. cat. Erich Heckel. Aquarelle, Reutlingen 1988, p. 9

Essay
The watercolors from Erich Heckel's "Brücke" days in Dresden are characterized by bright and intensive colors and a sketchy and spontaneous composition. The depicted person doubtlessly is Fränzi, who sat model for the "Brücke" artists on many occasions as of 1909. When Roman Norbert Ketterer asked Erich Heckel in 1958 what it was that he particularly remembered of the year 1909, he answered: "In my memory it is her [Fränzi] [..] a special event from 1909 that must be seen in connection with the relatively planar painting [..] These pictures were made with thinned paint [..] By 1909 this method had become [..] standard for all of us." (Quote after: Klaus Albers/Gerd Presler, Festschrift for Eberhard W. Kornfeld on occasion of his 80th birthday, special print, p. 215). Our watercolor is a prime example of this development.
More Information
+
Sell
Would you like to sell a similar object?
+
Register for
Erich Heckel
+
Buying from A-Z
+
Contact a specialist
+
Erich Heckel Biography
Share 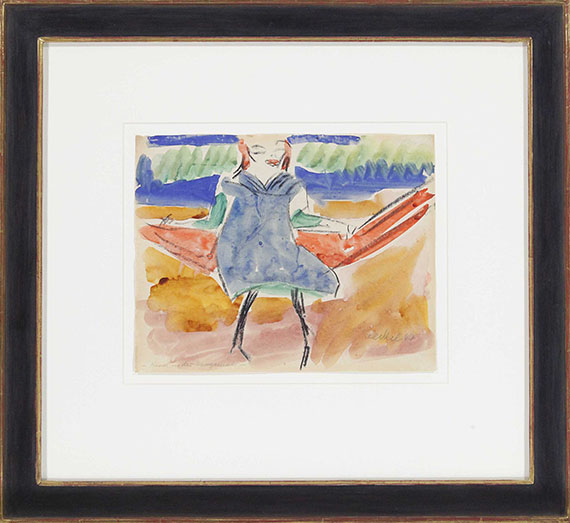