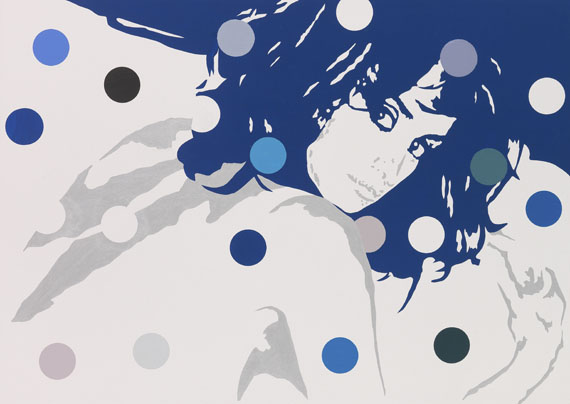 “To me a beautiful woman still is the most perfect thing I can image: the ideal subject of art.“
Werner Berges 1967

Essay
Before Werner Berges, painter and sculptor, began to study at the State Art School in Bremen and the State University of Visual Arts in Berlin, he completed an apprenticeship as commercial artist with a focus on fashion design. This explains his preference for the emphasis on graphic elements in his oeuvre. For his works he employs images from advertising, film and TV, he became occupied with the image of the female body prevailing in the 1960s and 70s from an early point on: "[…] the self confident beauty claiming her role in society: cool, distant, erotically autonomous, feminine to the core“ (quote from: Stefan Tolksdorf, Weiblichkeit als dynamisches Prinzip, in: Kritisches Lexikon der Gegenwartskunst, volume 92, issue 23, p. 2). By means of formal reduction and a strong schematization of the naked female body, Berger attains a very individual German Pop-Art variant, which puts focus on "the feamle figure as a natural and autonomous being“ (ibidem) instead of an excessive sexualization. The art historian Tobias Kaufhold remarks: "There is not a single example in Werner Berges' work in which the observer looks down on the depicted women“ (ibidem). [CH]
More Information
+
Sell
Get a free appraisal for a similar object!
+
Register for
Werner Berges
+
Buying from A-Z
+
Contact a specialist
Share