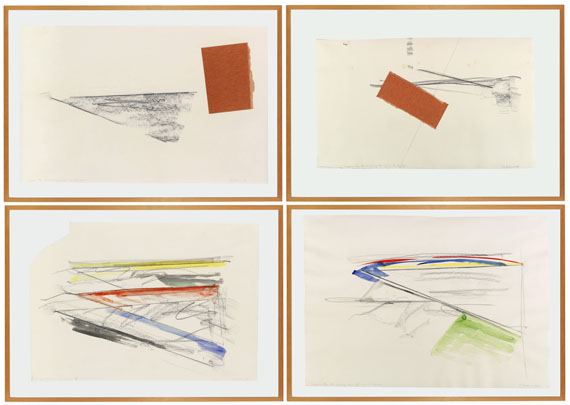 "The works from Palermo have to be experienced, have to be discussed, they are the pride that would have led other nations to great museums. The tragic his short life is, the relatively small amount of works, which, just as it is the case with the other geniuses of our century from Egon Schiele to murdered artists like Otto Freundlich, show that compression may lead to intellectual results that could else have been diluted." Dieter Ronte, 1994, quote after: Palermo. Bilder, Objekte, Zeichnungen, ex. cat. Kunstmuseum Bonn, Bonn 1995, p. 11)
"Palermo was a heavy drinker & smoker + lots of coffee. A cool kind of Pollock type. Sonft artistic colors & forms. Uninhibited. Spontaneous. He picked up trash on his way home after a boozy night, which he then turned into poetry. There probably is some kind of category that some critic 'invented', in order to put a label on Palermo. But that neither does justice to him nor to the 'fairylike' aura of his works. How shall I put it – 'There's this breeze', would be what Karl Valentin might have said…“ Christof Kohlhöfer, artist, Los Angeles.

Essay
The remarkable progressiveness of Palermo’s artistic creation can be best fathomed on basis of the account of a visit to the studio by the art historian and museum director Dieter Ronte in 1973, the year this work was made: "A visit to Palermo’s studio leaves me astonished. I actually did not see much; no real studio, no stacks of pictures, no smells of oil, jute or canvas [..] Somehow everything was unusual. We weren’t even looking at artworks, we were discussing, pondering projects." (D. Ronte, in: Palermo. Bilder, Objekte, Zeichnungen, ex. cat. Kunstmuseum Bonn, Bonn 1995, p. 9). Ronte describes Palermo as a difficult artist, a "thinker, a philosopher of the visual". Accordingly, it is little surprising that Palermo’s graphic work confronts us with this spontaneous intellectual impulse in such an immediate and direct manner. These graphic accomplishments"count among the internationally [..] greatest achievements of German artists in the second half of our century" (D. Ronte/K. Schwenk, in: ibidem). Palermo’s paper works are documents of the very intellectual process of creation that is crucial for an art that no longer seeks to represent and does not even accept signs in an iconic sense. Our four-part series of drawings "Happier than the Morning Sun" is a marvelous example from Palermo’s small graphic oeuvre made from between 1967 and 1977. Works like this are very rare on the international auction market. [JS]
Palermo‘s series are systems, fine webs of a dialog between surface and space, between the swift line and a second level of collaged colors. \line The sheets of“Happier than the Morning Sun“ have different formats– relatingto one another irregularly. While I and II are connected by pasted red cardboard elements, III and IV share the same color tone of yellow, blue and red. Sparse charcoal lines on sheet I hint at the tip of a triangle as frottage, its closed form is only revealed in sheet IV. \line Another series, another single sheet, a yellow triangle and even a multiple, aplywood triangle with 4 rust-red grano-lithographs complete the work group “to Happier than the Morning Sun“ in 1975. The English title “Happier than the Morning Sun“, unusual for Palermo, suggests in parentheses “to S. Wonder“ both the addressee and the origin. Stevie Wonder‘s word best-sellingalbum “Music of My Mind“ wasreleased in 1972. Palermo livedin New York City in1973 and perhaps listened to the record on one or the other occasion. \line Palermo had tried out four-part series as a special form of aggregating paradigmatic ideas long before 1974. In 1970 he created a portfolio with 4 silkscreens by the title “4 Prototypes“, a series combined by a gray disc and a black square, a green non-isoscelestriangle and a blue isosceles triangle. The blue triangle – since 1966 ultramarine and, if possible, to be mounted above a door– became Palermo‘s trademark. With its irregular edges it is more of a talisman than a mathematical phenomenon.
With the series “Satyricon“ Palermo had already liberated the series from the homogeneityof itsformatsand its regular outer shapesas early as in 1970. In “Happier than the Morning Sun“ the image surface no longer is merely a trivial “ground“ but as it has already becomea select “space“. The sheet‘s boundariesare “teammates“ and no arbitrariness or even a “mistake“.
More Information
+
Sell
Would you like to sell a similar object?
+
Register for
Blinky Palermo
+
Buying from A-Z
+
Contact a specialist
+
Blinky Palermo Biography
Share 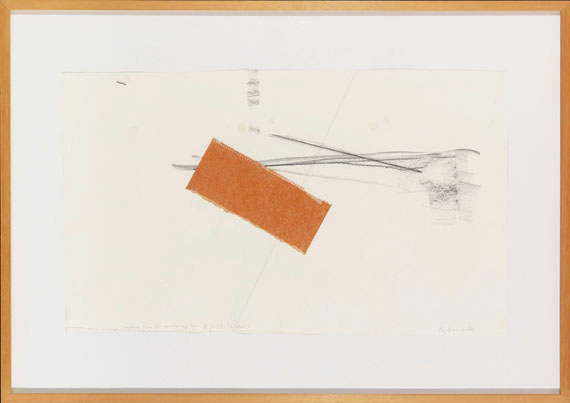 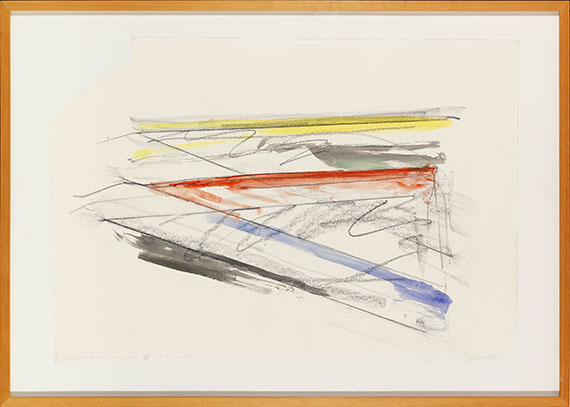 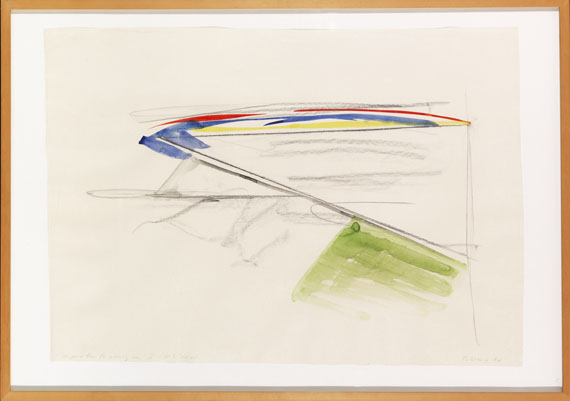 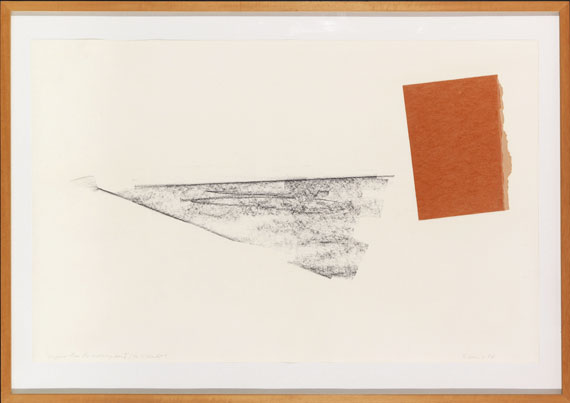 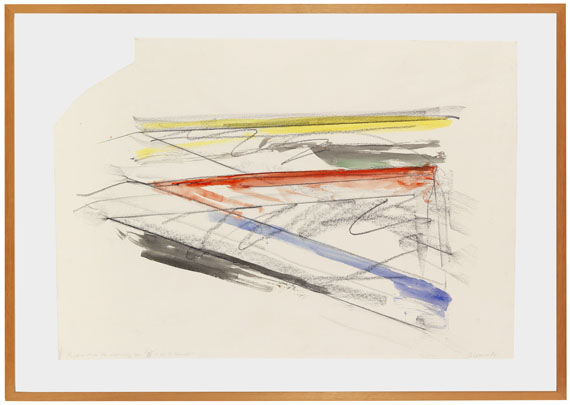 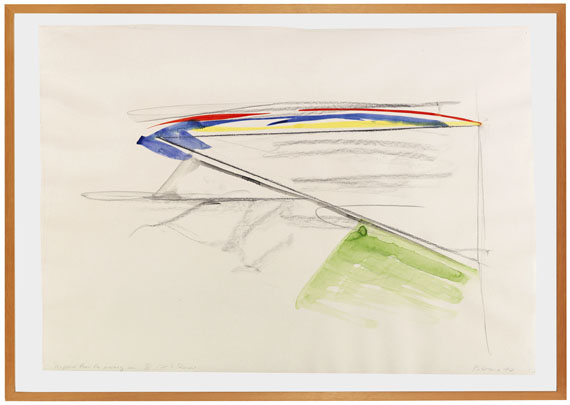 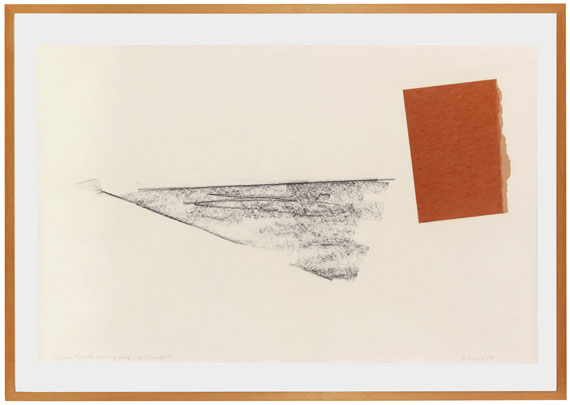 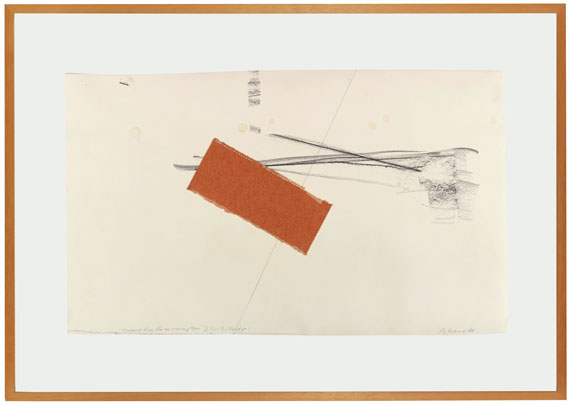 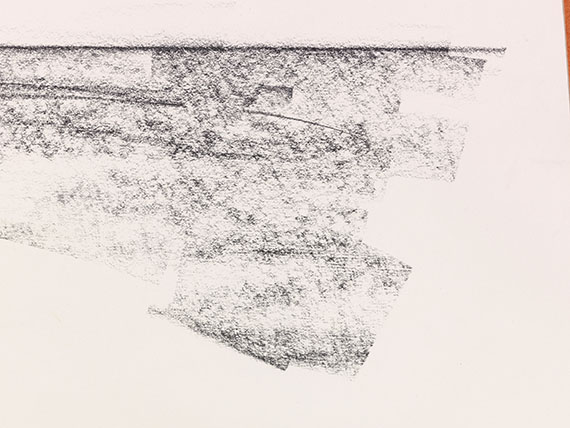 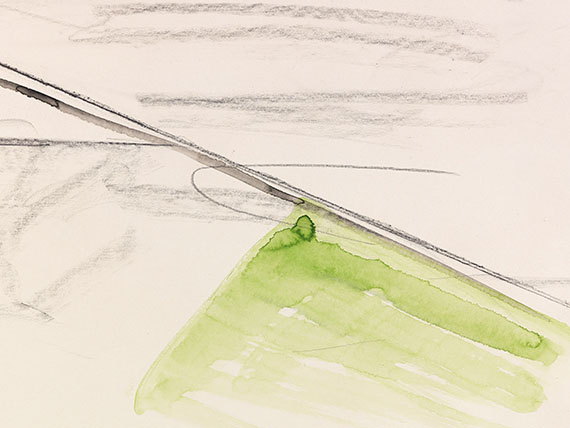 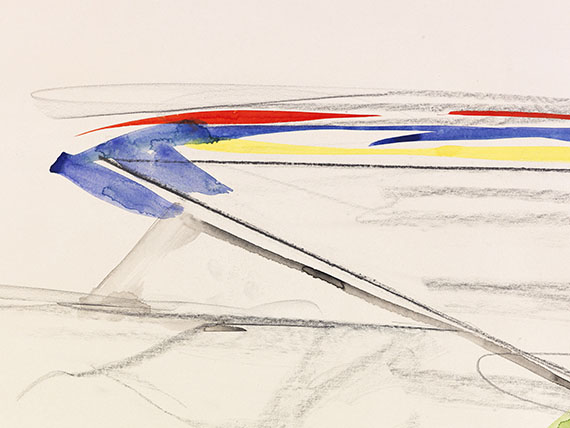 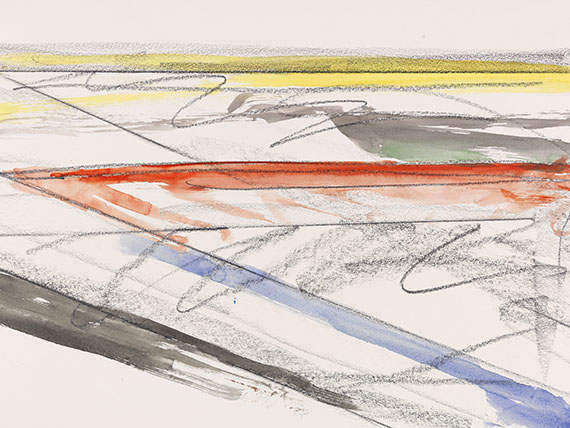