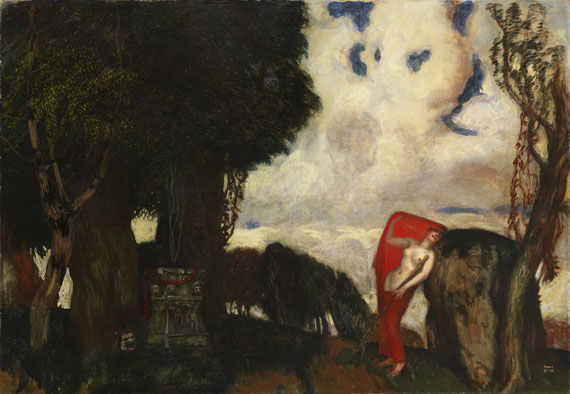 "When I select my themes I make sure to pick only what is purely human and eternally valid."
Franz von Stuck, quote after ex. cat. Sünde und Secession. Franz von Stuck in Vienna, Vienna 2016, p. 90.

Essay
Franz von Stuck has a deep fascination for antiquity and Greek mythology. To him it is not the adoration of a classic past that is at the core of this fascination, instead he is interested in mythology as a vehicle to express human character traits and emotions. On several occasions Stuck decided to depict his mythological scene in a stag-like composition that calls reminiscence of theater performances of Greek tragedies. The picture "Bacchantenzug" from 1897 has an almost identical arrangement as this painting "Iphigenie auf Tauris", the only difference is the laterally reversed execution with the grove's dark trees in right (cf. Voss 159). In "Iphigenie auf Tauris" (Iphigenia in Tauris) Stuck depicts the scene in which her father Agamemnon, king of Mycenae, is about to sacrifice Iphigenia to the goddess Artemis. She is, however, saved by Artemis the last moment and is appointed her high priestess. Iphigenia is doubtlessly rendered with an erotic aura, as it is the case with nearly all of Stuck's mythological motifs. In the end, the story's original significance, the power of the gods or moral categories of right and wrong, are not at the core of the artist's occupation with the theme, what he examined was the then current topic of the relation between the sexes and the role of the woman as seductress. Influenced by the theme of the "femme fatale", omnipresent among the artist of Symbolism in those days, Franz von Stuck also sees women as wicked, independent and predacious beings. His depiction of the Sphinx clearly illustrates this assumption (cf. Ketterer Kunst, Munich, auction 435, November 25th, 2016, lot 93), but this position also becomes obvious in the painting "Iphigenie auf Tauris". While, at first sight, Iphigenia is a victim of Artemis, her pose hints at an expression of sexual ecstasy, the power she exercises over the male sex is symbolized by the hollow masks on the tree and on the ground next to the altar.
More Information
+
Sell
Would you like to sell a similar object?
+
Register for
Franz von Stuck
+
Buying from A-Z
+
Contact a specialist
+
Franz von Stuck Biography
Share 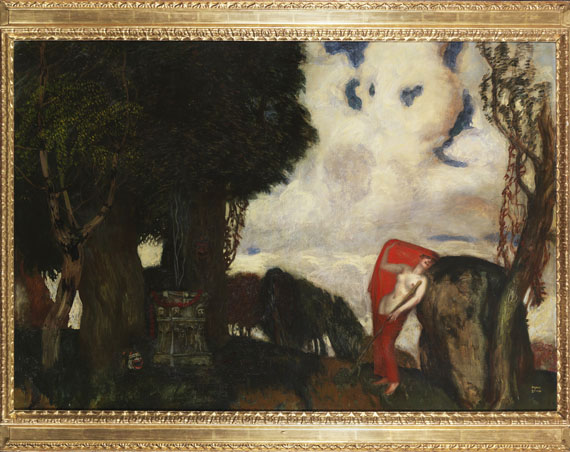