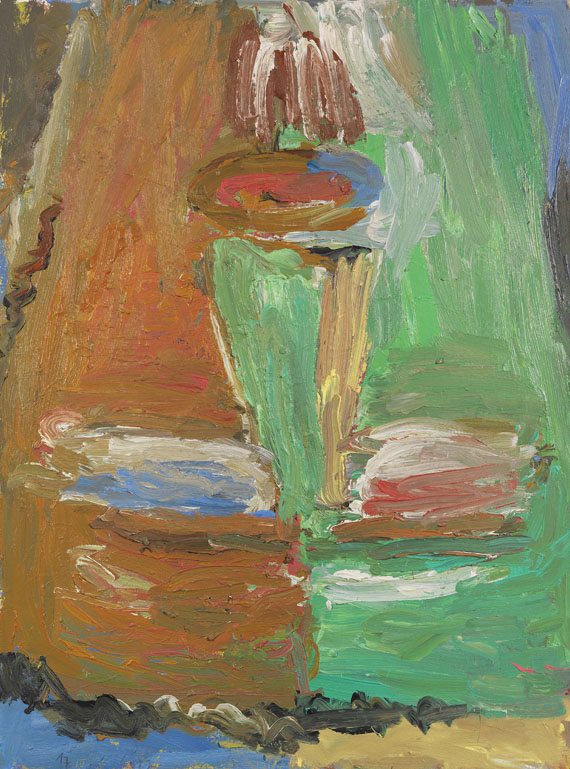 The large-size paintings from his early period of creation, which reaches into the 1980s, count among his most sought-after works on the international auction market.
The work's authenticity has kindly been confirmed orally by the Atelier Georg Baselitz. We are grateful for their kind support in cataloging this lot.

"I was occupied with it (the Abgar head) when I suddenly did something in my pictures that I had never done before, when I painted a head the size of the canvas, and I realized that the head showed no physical contour, no volume, that it was flat and larger than life, the nose at the image’s center, the left and the right side of the face separated and the separation emphasized by contrary colors.“ (Baselitz, quote after: Ex. cat. Kunsthalle Bielefeld, Georg Baselitz – Vier Wände, published by Ulrich Weisner, Bielefeld 1985, p. 14.)

The motif of the "Abgarkopf" (Abgar Head) is part of a small series of similar Abgar pictures from 1984 in which Baselitz confronts us with Christ's visage in the upside-down manner that became characteristic of his paintings from 1969 on. In the early 1980s Baselitz found decisive input in early Christian art, less for its iconographic contents but for the occupation with the origin of images itself. In this context the artist examined the image of Christ, as well as other Christian motifs, such as the "Crucifixion" or "The Veil of Veronica". Just as it is the case with the sudarium of St. Veronica, the Abgar picture is also a "Vera Icon" – a true image of Christ and not manmade. The legend of Abgar is about the healing of Abgarus V. of Edessa with a cloth with an impression of Christ’s face, today the Vatican considers it the oldest known representation of Jesus Christ. In addition, the image is also regarded an "acheiropoieton“, an image not created by the hand of man. Baselitz uses it as a kind of legend for the origins of painting and shapes it as an independent image type, which, due to the formal reduction to the essential elements, calls reminiscence of the faces in Jawlenky's famous Meditations, however, only as far as the dynamic brushstrokes are concerned. The artist refined this concept to abstraction in his small format (see illu.). Baselitz' monumental painting "Abgar Head" treats the art-historical tradition of the image of Christ playfully and takes the original image of art toModernism: By making the image of Christ subject to his own pictorial language, presenting it not only in a monumental format but also upside-down, Baselitz breaks with precedent in the most striking manner, creating a visual manifestation of his own artistic progressiveness that is of epic significance for art history. [JS]
More Information
+
Sell
Get a free appraisal for a similar object!
+
Register for
Georg Baselitz
+
Buying from A-Z
+
Contact a specialist
+
Georg Baselitz Biography
Share