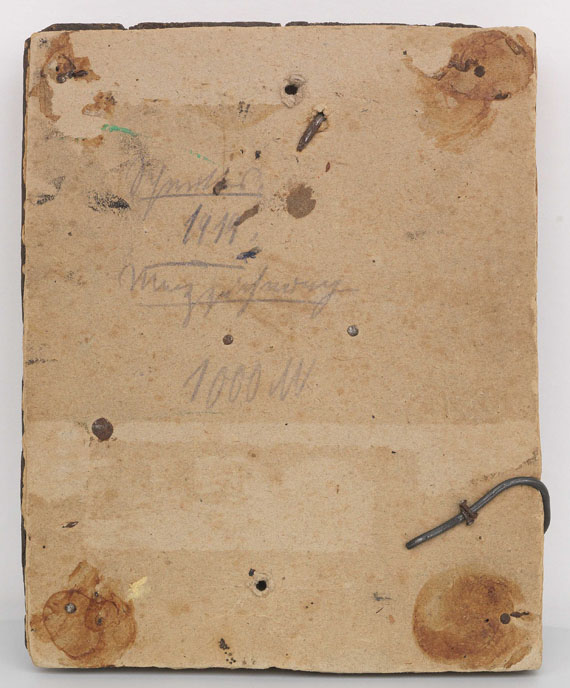 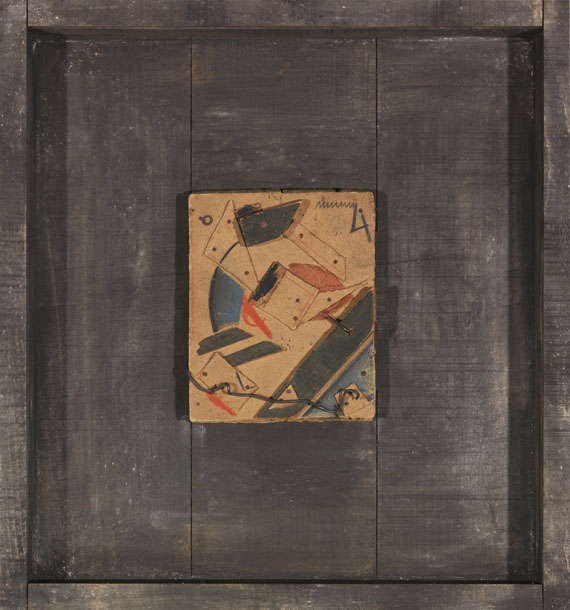 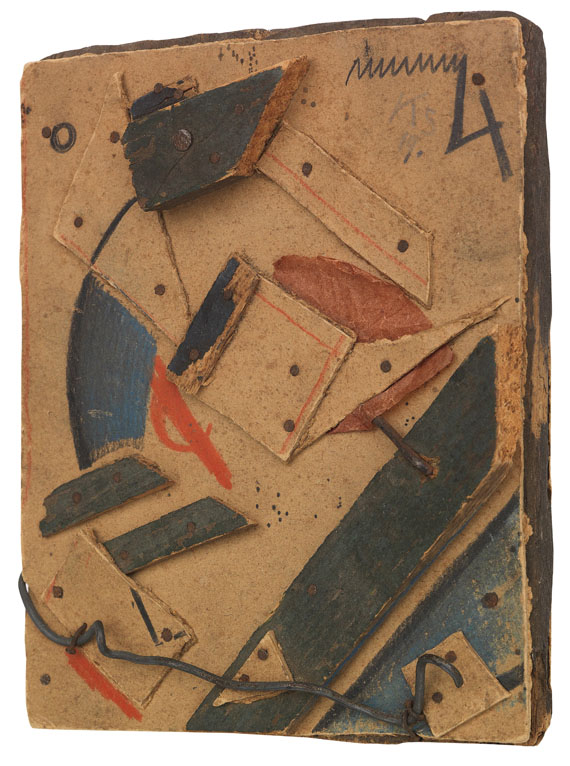 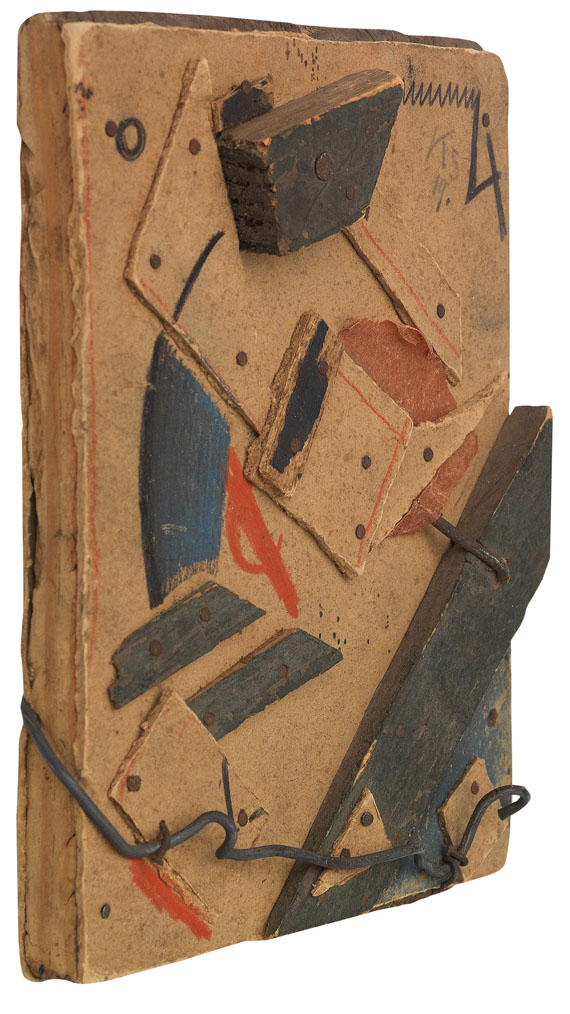 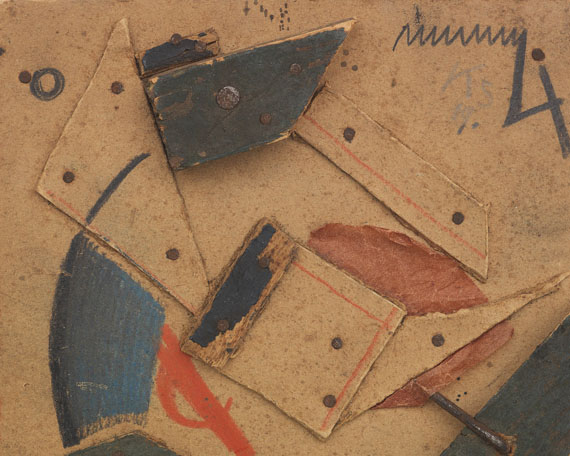 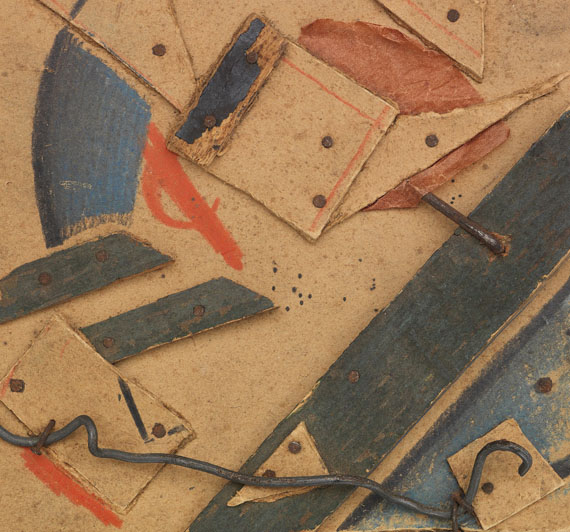 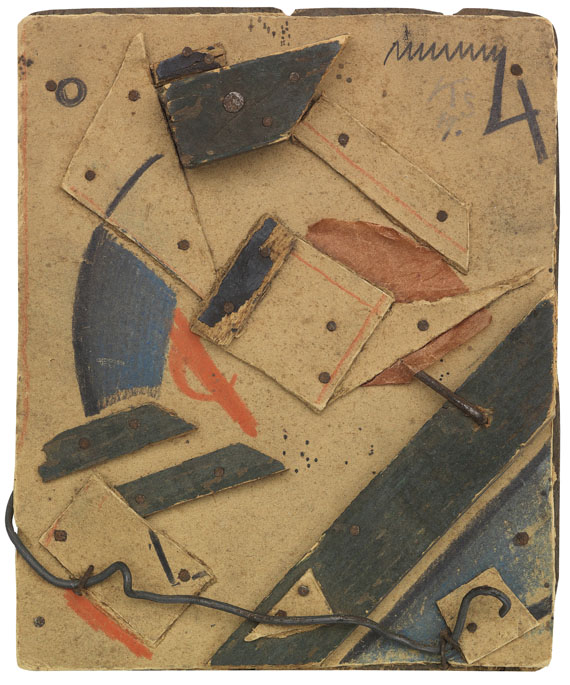 This work is, next to the Merz pictures 5A and 9A, only the third assemblage from the significant period of the 1910s ever offered on the international auction market. (Source: www.artnet.com).

"I am a painter, I nail my pictures." - Kurt Schwitters
"The highest form of art is the total work of art in which the boundaries between art and non-art become void." - Kurt Schwitters
"The work in question originates from the early phase of Schwitters's Merz art and consists, stylistically, of an unusual mixture of drawing and assemblage, which in Schwitters's oevre is absolutely singular." - Dr. Isabel Schulz and Dr. Karin Orchard, 27 February 2014

Kurt Schwitters uses incidentally found materials for his collages, which he began to make in1918. Based on his art concept and literary texts, he founded the Dada institution "Merz" in Hanover, for the name he uses a fragment from the word "Commerzbank" (lat. cum=with, merx=commodity), one of the then leading banks in Germany. It was in those days that Schwitters was in contact with the circle around the artist Bernhard Hoetger, who worked and lived in the artist colony Worpswede. This assemblage came into existence in context of an artist meeting in Worpswede in 1919: Eugenie von Garvens, a direct neighbor of Hoetgers, gives account of an "artwork of wood and cardboard" that Kurt Schwitters "laid down" in her garden in Worpswede. The artist put a price of nothing less than 1000 Mark on the back of the small work– far more than Schwitters would usually ask for his works in 1919; perhaps this was his way to express his appreciation for this type of work in his oeuvre, well aware that it could not be realized. The work got into the ownership of a Dutch family, where it remained until 1976, through the artist Fritz Uphoff. What is particularly remarkable is the description "Merzzeichnung" (Merz Drawing) that Schwitters chose for the work, as he usually used this denomination for his two-dimensional color collages and compositions. Our work is the only Merz Drawing in which drawing and assemblage are united. [EH]
More Information
+
Sell
Get a free appraisal for a similar object!
+
Register for
Kurt Schwitters
+
Buying from A-Z
+
Contact a specialist
+
Kurt Schwitters Biography
Share