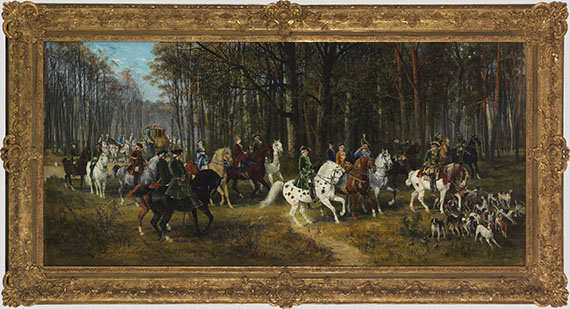 Jan Chelminski was born in Brzostów, Poland, in 1851 and had his first art lessons in the drawing class of Juliusz Kossak in Warsaw. In order to make a living he was working part-time as lithographer and retoucher at a photographic institute. In 1873 Chelminski relocated to Munich and studied at the Academy of Fine Arts at Alexander Strähuber and Alexander Wagner. In 1875 he was student of the acclaimed artist Josef von Brandt and a year later of Franz Adam. He was member of the Munich Artist Association from 1874 to 1883. As of around 1875 a circle of young, predominantly Polish artists formed around Josef von Brandt in Munich, the so-called Brandt-School. Apart from Jan Chelminski, other artists in the group were Alfred von Wierusz-Kowalski and Franz Roubaud. Historical illustrations of Cossack and Tatar warriors, depictions of horse markets and hunting scenes contributed to the artists‘ success for many years. Scenes from Napoleon‘s campaigns also were motifs popular with the Polish painters. As of around 1870 Maksymilian Gierymski revived the historic genre of coursing scenes with rococo costumes, over the following years his painter colleagues Wierusz-Kowalski and Chelminski adopted this trend. The large-format painting of a courtly hunt with coach and a pack of hounds offered here is particularly rich in detail. Following his years in Munich, Chelminski initially went to England in 1882 and then traveled throughout Europe for some time. As of 1884 he lived in New York for several years. In 1888 and1899 he made London his home again before he relocated to Paris where he was among the founding members of the Polish Literary Society in 1910. For some years he was also the society's vice president. Chelminski was also active as translator of Polish literature into French. In 1915 the artist settled in New York, where he died in 1925. Important works by the artist can be found at, among others, the following museums: Kunsthalle, Bremen, National Gallery of Art, Dublin, Picture Gallery, Lwiw (Ukraine), Kósciuszko Foundation, New York, Museum Narodowy, Warsaw
More Information
+
Sell
Get a free appraisal for a similar object!
+
Register for
Jan Chelminski
+
Buying from A-Z
+
Contact a specialist
+
Jan Chelminski Biography
Share