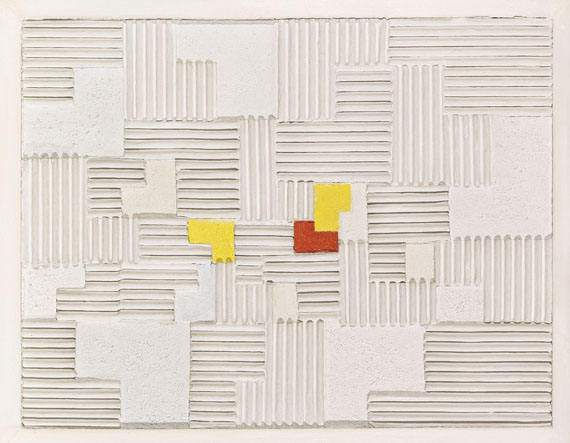 "Those painters that implemented Mondrian's aesthetic principles most successfully are, in my opinion, Fritz Glarner and Adolf Fleischmann. (..) Fleischmann's works displayed at Rose Fried Gallery [1955] [..] made one of the most important German contemporary artists - next to Hartung - famous in New York […]. If we see a strive in Bach to subdivide time, then Fleischmann's quest is to subdivide space. Fleischmann's art lives on the urge to divide space lyrically.
- Darío Suro (1917–1997), art critic, active in New York,1955, observing tendencies of abstract painting in the American metropolis (quote after: Darío Suro, La pintura en Nueva York: Fleischmann, in: El Caribe (Santo Domingo, Puerto Rico) 26 June 1955 in: Cuadernos hispanoamericanos, no. 68/69, August/September 1955, pp. 226 - 228).

Essay
Fleischmann‘s artistic creation is concentrated on linear-geometric compositions characterized by variations of the theme. Optical balance is one of his key design elements, the attempt to bring an image construction based on geometric principles into harmonious balance. "The relief pictures are a kind of synthesis of the image problems that he had worked out in his late period of creation. Fleischmann effectuated plasticity, something he had always aspired, with the simple, almost banal material corrugated board. He implements the color vibration in truly vivid light vibrations. (..) In most cases Fleischmann makes sure that the few colors he occasionally adds to the picture do not adjoin one another." (Quote after: Alfred M. Fischer, Adolf Fleischmann (1892-1968), Tübingen 1976, pp. 76f.). However, in our relief painting ‘Nr. D 60/2‘ he allows a rich yellow to border the contrasting red at the composition‘s center. This color contrast provides warmth and intensity which dynamically illuminates the motion of the light and the composition.
More Information
+
Sell
Would you like to sell a similar object?
+
Register for
Adolf Richard Fleischmann
+
Buying from A-Z
+
Contact a specialist
+
Adolf Richard Fleischmann Biography
Share