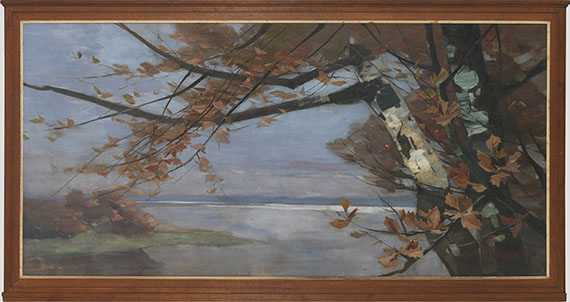 "Hagemeister internalized the world of Impressionism through the contact with the most modern artists of his days and he was also coined by study trips to Paris [1884/85], where he saw the art of Manet or Monet. During the years of change he found orientation with the great protagonists of Modernism, transferring their pictorial approach into his own style by employing color as an independent value, in order to add motion, rhythm and liveliness to his landscapes. […] His landscapes are characterized by their color variety, employed in well-measured doses they open out into chromatic nuances. Among his most common stylistic means we find thick splatters of paint, leaves rendered in dabs or blades of grass in the wind executed with swift brushstrokes which leads to the impression of a landscape in motion. Quickly capturing and transferring the motif helped him to create motion and to imitate the rhythm of nature. On the other hand, the haptic element in Hagemeister‘s painting made for the liveliness of his lakefront pictures or seascapes. Color reliefs let mounds, foliage or wave crests appear plastic and tangible. A spot of red paint paint thrust onto the canvas is formed to the fruit of a seaberry bush, various shades of brown illustrate the lakeside paths in Lohme. Only sensual perception of nature allows the creation of intrinsic values." (Hendrikje Warmt, Karl Hagemeister. In Reflexion der Stille. Monography and catlog raisonné of paintings, Berlin-Brandenburg 2016, pp. 181ff.).
More Information
+
Sell
Get a free appraisal for a similar object!
+
Register for
Karl Hagemeister
+
Buying from A-Z
+
Contact a specialist
+
Karl Hagemeister Biography
Share