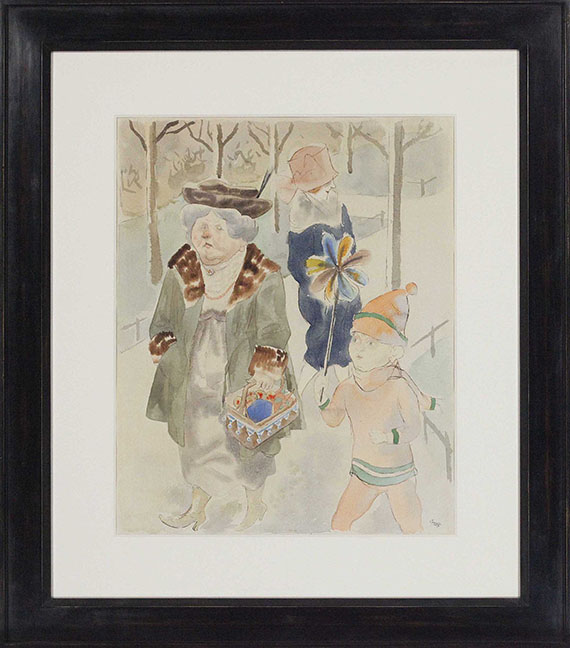 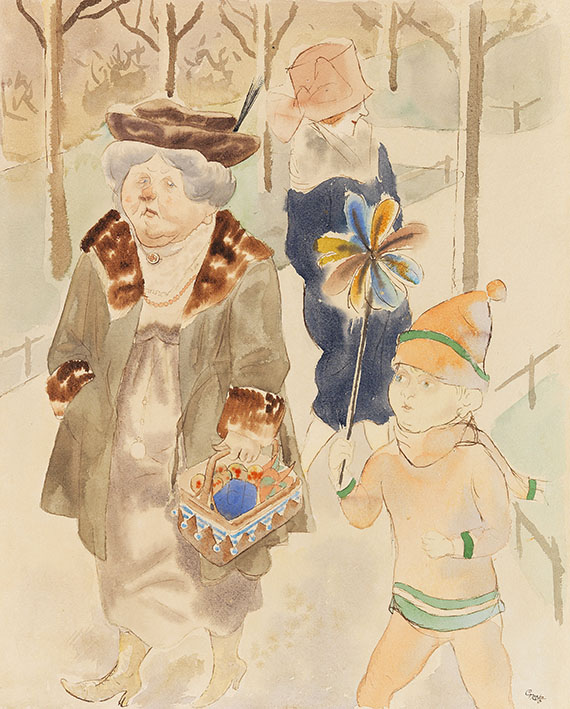 Large-size watercolor in fine execution from the early 1920s, the most accomplished period George Grosz's creation.
With a photo expertise from Ralph Jentsch, Berlin, dated 7 June 2017.

"Showing the oppressed the true faces of their masters - that is the intention of my work.“
George Grosz, 1925, quote after: George Grosz and Wieland Herzfelde: Statt einer Biografie, in: ibidem: die Kunst ist in Gefahr. Drei Aufsätze. Berlin 1925, p. 43.

George Grosz‘s observations of everyday life are the basis for his socio-critical works. In the watercolor “Rotkreuztante“ [Red Cross Shrew] he expresses his criticism of the decayed morals of society in his days with subtle mastery. “Perhaps we are entering new Middle Ages?“, wrote the artist in an essay in 1931. “Also another word for German tradition“. “Who knows? It seems as if humanist ideas are on the decline.“ (Quote after George Grosz, “Unter anderem ein Wort für die deutsche Tradition“, in: Das Kunstblatt 15 (1931), pp. 79f.). With a dunning and unsparing eye Grosz depicts and caricatures street scenes from a post-war society that has lost all moral values: the Berlin petty bourgeois of the twenties– a social group that displayed its prosperity with great vulgarity. In Grosz‘s opinion their prosperity is in strong conflict with the obvious social consequences of the political and economic chaos of the Weimar Republic. With the watercolor “Rotkreuztante“ the artists invites us to take a closer look at the ruling social class. We see a well-dressed older lady, taking a stroll with what seems to be her grandchild through Berlin in autumn, in order to run some errands. The well-fed old lady naturally wears fur. What else should one wear when going out on the streets. She scrutinizes her likewise well-dressed grandson. The only thing that seems to bug her that moment is his friskiness, as playing in the street with a little wind mill is absolutely indecorous for their position. The softly applied watercolors are in strong contrast with the grim face of the old “Red Cross Shrew“, a lady from a long-forgotten era, trying hard to maintain her overcome values to which she believes to have some kind of God-given right. In Grosz‘s words: “The ado about the own person is completely irrelevant“. (George Grosz 1925, quote fromGeorge Grosz and Wieland Herzfelde: Statt einer Biografie, in: ibidem: die Kunst ist in Gefahr. Drei Aufsätze. Berlin 1925, p. 43.).
More Information
+
Sell
Get a free appraisal for a similar object!
+
Register for
George Grosz
+
Buying from A-Z
+
Contact a specialist
+
George Grosz Biography
Share