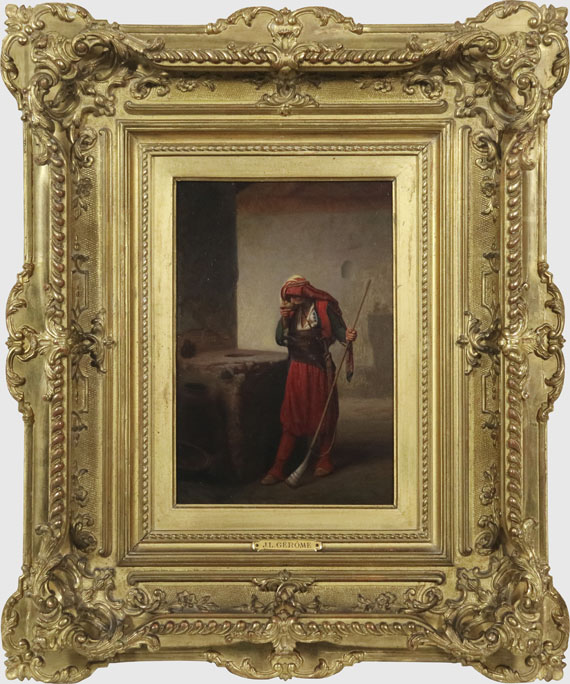 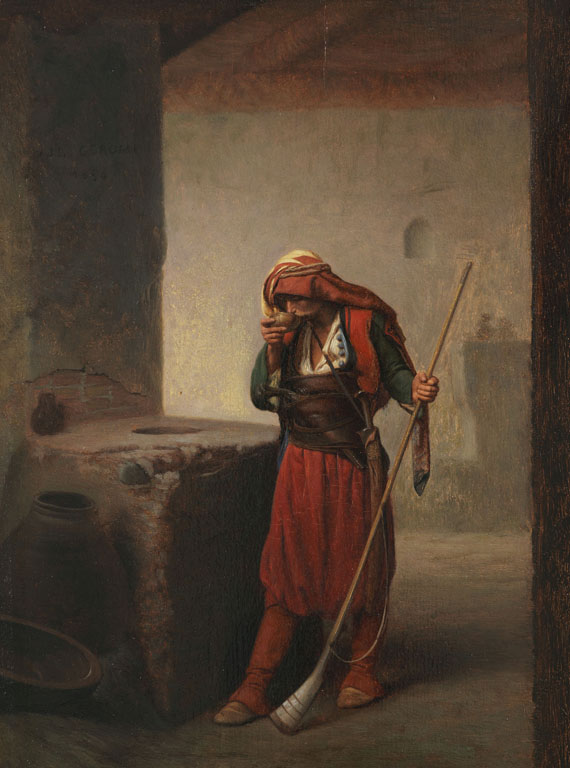 Jean-Léon Gérômes oriental subjects predominantly comprise harem- and slave market scenes, everyday scenes, landscapes and religious ceremonies as well as scenes from Napoleon Bonaparte’s campaign in Egypt. The French campaign in Egypt and Syria (1798-1801) was well documented by numerous accompanying drawers and painters. Even though the campaign failed, it was glorified in arts, which led to a fascination for Egypt in France that was reflected in arts, architecture, arts and crafts, music and theater over decades. A little later it also spilled over to England and Germany. Just as it was the case with many artists from the following generations, the Egyptomania also caught on with Gérôme. After his early years had been coined by an academic Classicism, he turned to Orientalism after his first journey to Egypt in the mid 1850s. However, we would soon distance himself "from the conventions of a romantic-visionary picture of the Orient and develop a rather impersonal ethnographic Hyperrealism based on scores of drawings, sketches, photographs he had made on his journeys. His fine and smooth treatment of the image surface and the almost photographic account of details create an impression of an utmost reality and demonstrate, in competition with photography, a new definition of a reality of painting with an empirical orientation." (AKL). This becomes obvious in our painting, which shows one of the artist’s most favorite motifs: the Arnaut. The word, borrowed from Turkish, describes an Albanian soldier in service of the Osman army. In the late 18\up6 th century they fought against the French troops in Egypt, where they eventually found a new home. Gérôme rendered even the smallest detail of the costume with great accuracy, showing his deep fascination for the proud Arnauts. The best known version of the theme is Gérôme’s painting "Arnautes jouant aux échecs", today in possession the Wallace Collection in London.
More Information
+
Sell
Get a free appraisal for a similar object!
+
Register for
Jean-Léon Gérôme
+
Buying from A-Z
+
Contact a specialist
Share