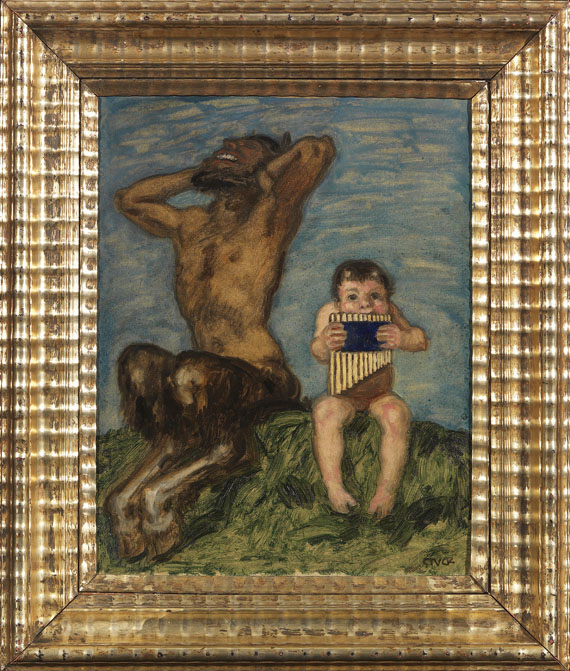 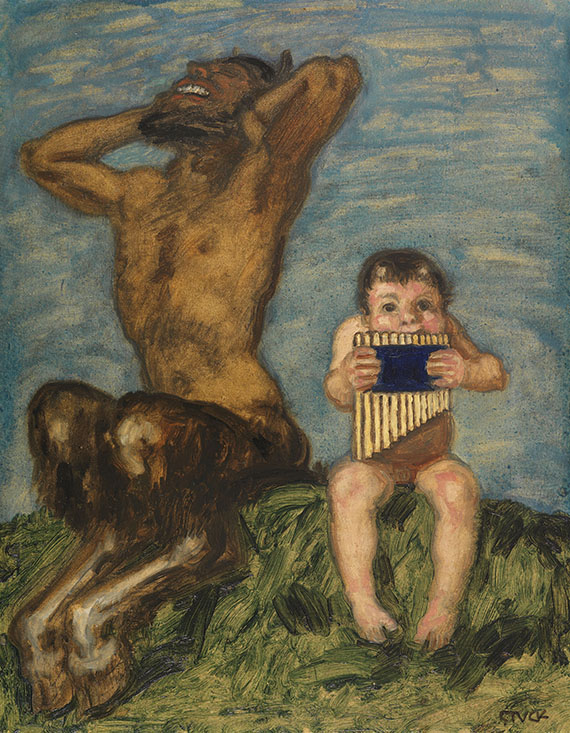 The figure Pan presumably is the most famous motif in Franz von Stuck‘s oeuvre, variations of it can be found in both Roman and Greek mythology.Illustrations of the Pan (Roman Faun) are documented from the beginning of his artisticcareeron, for example in early graphic works for the portfolios "Allegorien und Embleme" (1882-1884) and "Karten & Vignetten" (1886). Since 1889 variations of the Pan also appear in paintings based on classic narrations. The intensive occupation with the mythological figure made the artist widely famous from an early point on and the Pan became a motif that was also popular with other artists. "Eventually the magazine ‘Pan‘ published between 1895 and1900, towhichStuck made regular contributions such as the title page, made sure that the name Stuckbecame tantamount to the popularityof the subject Pan." (Alexander Klee, in: ex. cat. Sünde und Secession. Franz von Stuck in Wien, Belvedere, Vienna2016, p. 39). Pan (or Faun) is the god of nature, of meadowsand forests. He is a hybrid being with a human torso and goat legs. He protects the shepherds and their animals, he plays merry dancing music and is associated with fertility, ecstasy and desire. The basis of the theme depicted here, first rendered by Stuck around 1910 in "Syrinxblasender Faun mit zwei Faunkindern" and "Musikstunde", is an event thatwas passed on by Theocritus: Pan taught Daphnis, Hermes‘ marooned son who grew up as a shepherd boy, to play the flute. Iconographically the motif was coined by the ancient sculpture made by Heliodoros of Rhodes and their Roman copies. Photographs of the naked Stuck in the pose of the Barberini Faun (Glyptothek Munich), study drawings as well as severla variations in oil deliver proof of the artist‘ sintensive occupation with the theme. Initially Stuck found orientation with the neo-classical models, "however, he was not content with mere referencing the ancient models, instead he employed an ironic exaggerationto reduce their humanistic solemnity, thus making them more accessible and open for a broader artistic interpretation. This approach was supposedly owed to his activities for the satire magazine 'Lustige Blätter'." (Klee, ex. cat. 2016, p. 44). Even though Stuck uses the same arrangementfor the two seated figures in the final version, he renders adolescent Daphnis as a childlike boy who clumsily tries to play the flute so that the tantalized Pan has to block his ears. Taking the work‘ stime of origin around1910 into account it may have been an ironic interpretation of the relation between Stuck and his parents. The experiencedand established teacher Stuck shows little understanding for the avant-gardistexperiments of his students, which even sound dissonant to his ears. Particularly the former Stuck students Kandinsky and Klee must be mentioned in this context, as they followed the path from Expressionism to abstraction as the ‘BlauerReiter‘ at that time. The large-size, presumably final version of "Dissonanz" is on display at Villa Stuck in Munich today.
More Information
+
Sell
Get a free appraisal for a similar object!
+
Register for
Franz von Stuck
+
Buying from A-Z
+
Contact a specialist
+
Franz von Stuck Biography
Share