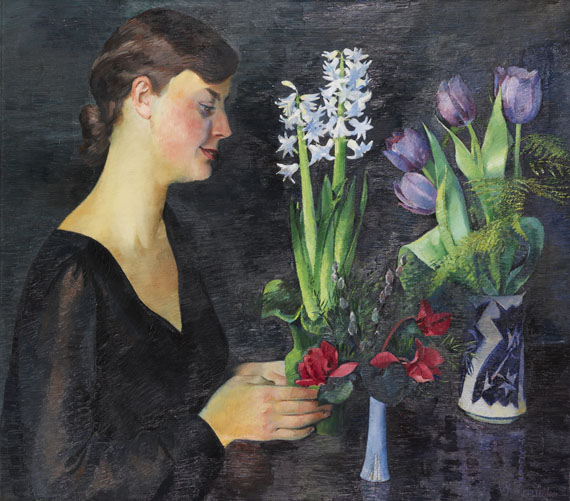 PROVENANCE: From the artist's estate.
Private collection Dortmund / Berlin (acquired from aforementioned after 1979).

Essay
Conrad Felixmüller‘s work has been subject of many exhibitions on German Expressionism and New Objectivity since the 1990s. Between 2012 and 2014 the traveling exhibition "Conrad Felixmüller. Zwischen Kunst und Politik" (Between Art and Politics) honored the artist. After a period characterized by an expressive pictorial language, Felixmüller attained a gesturally reduced repertoire of forms in the 1920s that expressed his take on New Objectivity. Until the late 1930s his artistic creation was clearlydominated by portraits of friends and family, which, owed to their reduced style, are documents of his significance for New Objectivity. Portraits from these years that show his wife Londa Freiinvon Berg (1896 -1979), whom Felixmüler married in 1918, or his two sons Luca and Titus, are striking documents of familial closeness. They are, such as it is the case with the paintings "Der gebrochene Arm" (Felixmüller 458), depicting Titus with a broken arm comforted by his mother Londa, or "Das täglich Brot" (Felixmüller 462) calm and intimate moments of family life. The focus of our painting "Blumenbetrachtung", which stages Londa in a black dress in front of a dark background arranging flowers in vases, is on the flowers and her rosy flesh tint. Felixmüller lets this bright element of life emerge from the dark surface. The lovely combination of portrait and reduced flower still life with hyacinths and cyclamen make this work a characteristic document of 1920s New Objectivity art as it unites two genres in a composition that is of a very strong poignancy. [JS]
More Information
+
Sell
Get a free appraisal for a similar object!
+
Register for
Conrad Felixmüller
+
Buying from A-Z
+
Contact a specialist
+
Conrad Felixmüller Biography
Share 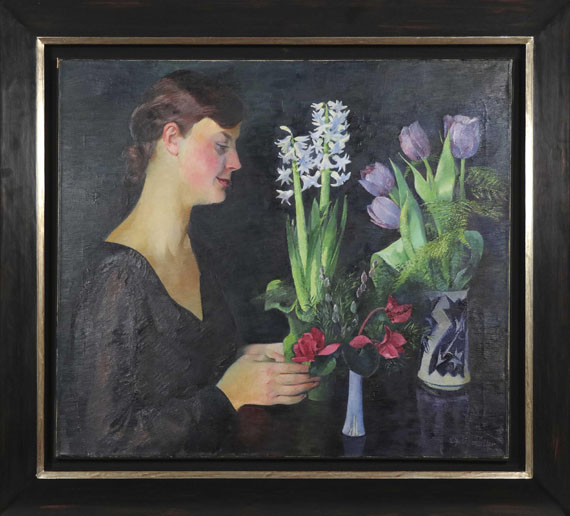