Brilliant expressive Nida landscape from the days of an artistic renaissance in 1919 after the end of World War I. The work delivers impressive proof of Pechsteins lasting love with the small coastal town Nida, which Pechstein always described as his "painters paradise" (quote after Soika, Max Pechstein, 2011, p. 31).
A coastal landscape with boathouse and male figures in similar coloring from 1919 is in the collection of the Brücke Museum in Berlin (cf. Soika 1919/73).

Essay
After the end of World War I Max Pechstein felt attracted by the small town of Nida on the Curonian Spit at the Baltic Sea, today part of Lithuania. He leads a simple and free life in an almost pristine nature, going sailing and fishing with the local fishermen. The village helps Pechstein to a mental and artistic renaissance after the experience of the cruelties of the war. In 1909 he visited the remote fishing village, which had already gained popularity among artist,s for the first time. In the 1870s Lovis Corinth made Nida his home during the summer months and followed a trend that began in the 19th century when many artists sought countryside seclusion. This tradition found a new peak during Expressionism. Pechstein‘s artist colleagues Otto Mueller and Max Beckmann were intensively occupied with the unity of man and nature. First and foremost, the painters felt attracted by the light‘s unusual intensity and the almost surreal colors of this haven. Pechstein's motivation to flee the big citiy was a certain romantic longing; the urge to merge art and nature. Nida is nestled between sand dunes, forests, the Baltic Sea and the lagoon. Fascinated by the landscape‘s nativeness, he visited the place regularly up into the 1930s. Pechstein wrote: “Nida is a joy, the sun setting in the Baltic and rising from the lagoon, wonderful pine trees and dunes all along the shore [..]“, it is a “rich treasure grove for the painter to see the flounder fishermen landing and all the people moving about between the small black and blue boats, the sand – depending on the time of the day – yellow or rose and the sea green or deep blue with white wave crests [..]“. (Quote Hermann Max Pechstein, in: Timm, Werner (editor): Ostsee-Bilder. Gemälde, Zeichnungen, Photographien, Regensburg 1981). [KD]
More Information
+
Sell
Would you like to sell a similar object?
+
Register for
Hermann Max Pechstein
+
Buying from A-Z
+
Contact a specialist
+
Hermann Max Pechstein Biography
Share 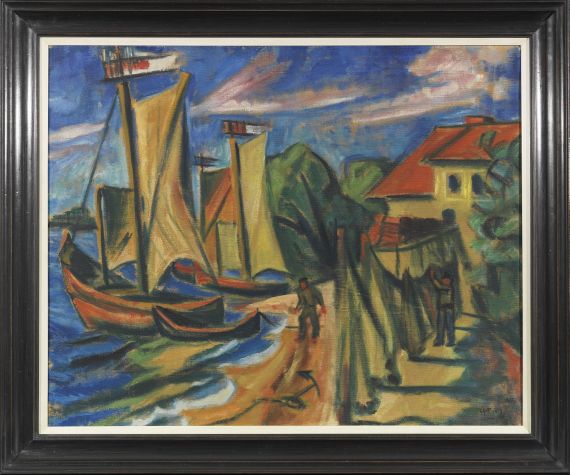 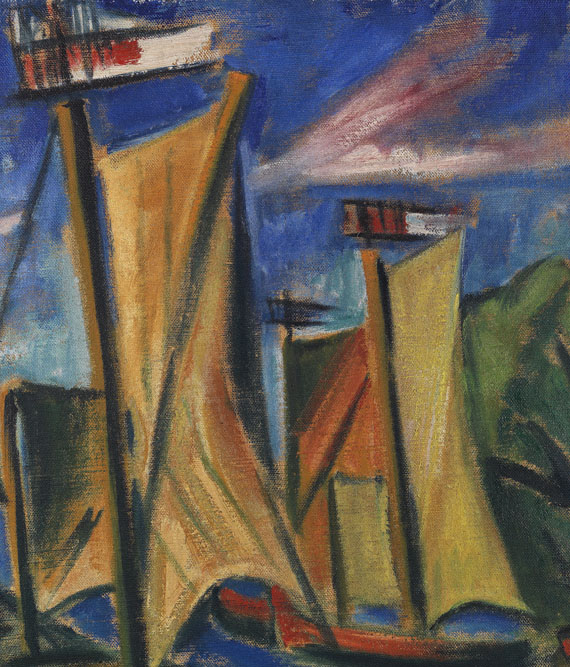