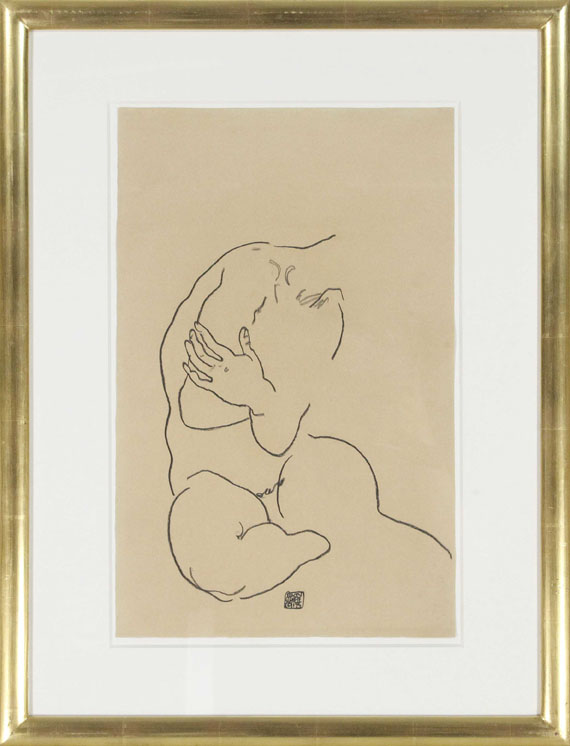 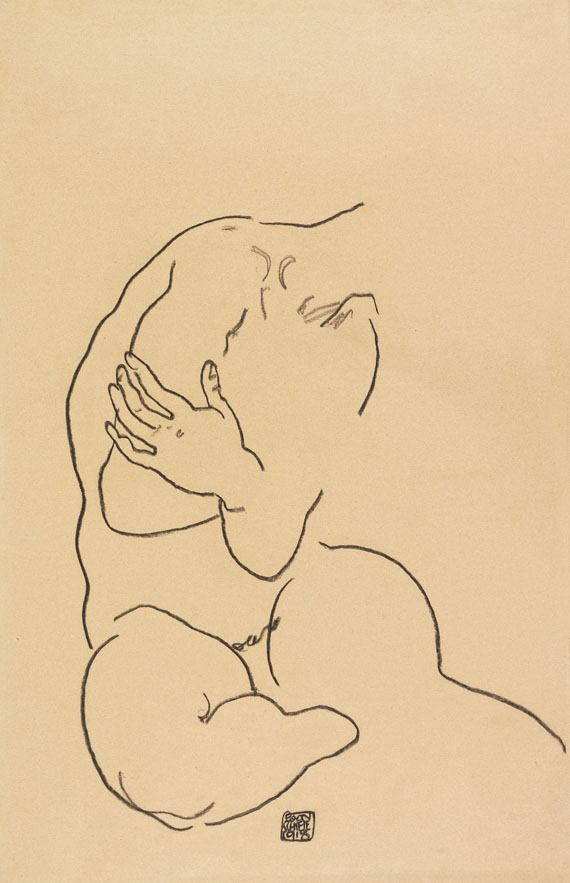 The artistic freedom that Egon Schiele attained in his drawings and watercolors, even more than it was the case with his paintings, would determine his entire creation. The relation between painter and model had entirely changed at the beginning of the 20th century. The expressionists of the artist group "Brücke" preferred female models, particularly young girls. The formal appeal of the still adolescent body, without the voluptuous curves that the impressionists were so fascinated by, played to aesthetics that found their fulfillment in the androgynous. Schiele followed this trend and even took it a step further. He approached the model in a direct manner that was almost shocking at first sight, entering a dialog with his model on two levels. There is, on the one hand, the formal-aesthetic perspective that fixates the body in a mannered pose, in order to extract a static pattern from the young girl. At the same time there is a voyeuristic closeness through which the artist conceives the depicted person in an utmost intimate situation. Our watercolor, which occupies a unique position in Schiele's oeuvre since hardly any comparable works are in existence, is characterized by the same direct expression and immediate observation which is also true for other works from these days. The position of the portrayed person can be understood in more than one way, both as crouching, when following the signature, as well as reclined with the legs bent. The latter is a perspective that Egon Schiele used on many occasions. The painter's slightly elevated position allowed him a wider scope onto the portrayed body. Firm, contour-like lines describe the nude and model the limbs in a clear style that needs no further explanation. Underlined by bright watercolors in the outer part of the image, the observer's attention is guided to the slightly wan bareness of the model. The artist created a special erotic tension by putting the skin color on a level with the color of the paper and through the accentual color components outside the body. The young girl's adolescent appeal is emphasized and given away to an optical desire.
When Schiele became a soldier in 1915 he largely ceased from painting. However, the painter continued to take part in very many exhibitions, among them the Vienna Secession exhibition, which became a great success in 1918, in which he showed 50 of his artworks. The same year Schiele died of a pandemic influenza on 31st October 1918.
More Information
+
Sell
Get a free appraisal for a similar object!
+
Register for
Egon Schiele
+
Buying from A-Z
+
Contact a specialist
+
Egon Schiele Biography
Share