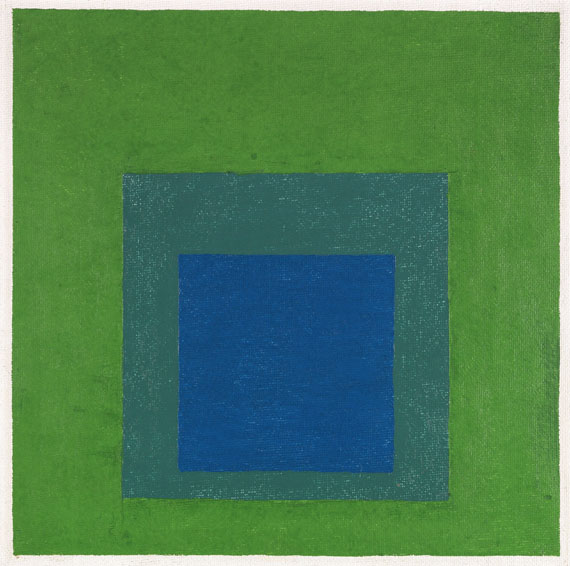 Our work from the iconic series “Homage to the Square“, which Joseph Albers was occupied with between 1949 and his death in 1976, shows a lucent color triad of a deep blue, a dark cobalt green and a light cadmium green. The work's title illustrates Albers' minimalistic approach. Besides the reduced form of the square, the artist only employs pure colors pressed directly from the paint tube. For his famous series the former Bauhaus student developed four basic patters of three or four squares of different sizes, their center point located on the same vertical central axis. The picture's surface arrangement appears to be mathematically exact and of equal power. However, to Albers the square constellations are just the framework for his actual artistic impulse: to him it is about the exploration of the interdependency of color and form and their position in context of other ancillary colors. Albers' finding that color is no absolute value but that it has to be perceived in context of its surroundings is the fundamental assumption for the analysis. In our work the lucent blue in the center and the bright light green on the outside seem to emerge from the surface owed to the contrast with the darker cobalt green between them. This leads to clear spatial effect on the two-dimensional image carrier. Surface turns to space and vice versa.
More Information
+
Sell
Get a free appraisal for a similar object!
+
Register for
Josef Albers
+
Buying from A-Z
+
Contact a specialist
+
Josef Albers Biography
Share