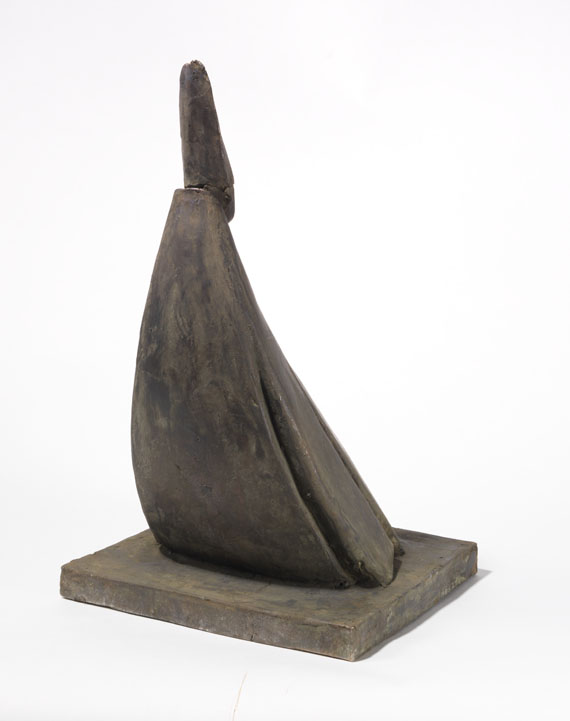 With a photo confrimation from Inge Manzù, Fondazione Giacomo Manzù, Ardea, dated 20 October 2016. The wor is registered at the Archivio di Giacomo Manzù with the number 13/2016.

Giacomo Manzù found the motif that would accompany his entire artistic creation at the early age of 36. From 1934 on, when he saw Pope Pius XI. seated between two cardinals in a mess, he was fascinated by the theme of the cardinal picture. Gian Lorenzo Bernini and his realistic marble portraits may also be considered a prominent Roman source of inspiration. In 1938 he made the first cardinal in bronze, the work is in possession of the Galleria Nazionale dell`Arte Moderna today, and in 1956 Manzù showed his increasingly abstract cardinals at the Venice Biennial. Other than it was the case with Bernini, Manzù did not strive for likeness, but for a formal schematism: the cope's triangular pyramid shape, the partly opened and partly closed cloak, crowned by a small head and the dignitary's slim miter. Through a sedulous examination of the motif the artist attained an ever new and varying geometric topos.
More Information
+
Sell
Get a free appraisal for a similar object!
+
Register for
Giacomo Manzù
+
Buying from A-Z
+
Contact a specialist
+
Giacomo Manzù Biography
Share