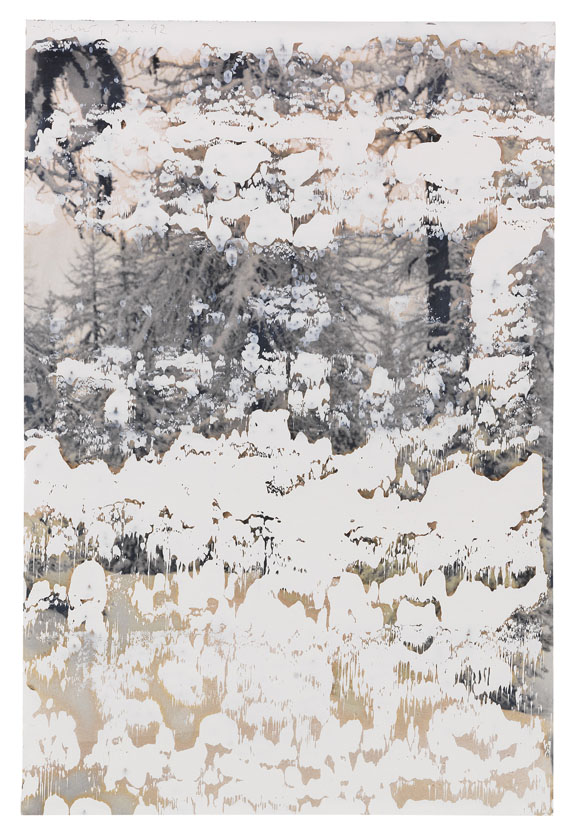 PROVENANCE: Galerie Fred Jahn, Munich (with gallery label on verso of backing board).

While abstract works from the late 1970s and 1980s, such as the painting 'Vögel' (catalog raisonné 509, 1984), hint at figurative associations through title and enigmatic codes, Richter completed his detachment from any concreteness whatsoever in his abstract works from the 1990s. Richter began to work the canvas with the squeegee and did not only ban any figurative associations but also the artist's signature, the characteristic stroke of the brush, from his work. This way he transfers the concealing blur, which had already characterized his figurative works, to his abstract oeuvre. The intellectually conceived application of the paint trails away into a seemingly incidental color veil through the treatment, behind which the original composition is just hinted at. Just as it is the case with the paintings, the squeegee technique also has an effect of disguise and alienation of the motif in this work. This way Richter's strange creations become arresting accounts of the unknown.
More Information
+
Sell
Get a free appraisal for a similar object!
+
Register for
Gerhard Richter
+
Buying from A-Z
+
Contact a specialist
+
Gerhard Richter Biography
Share