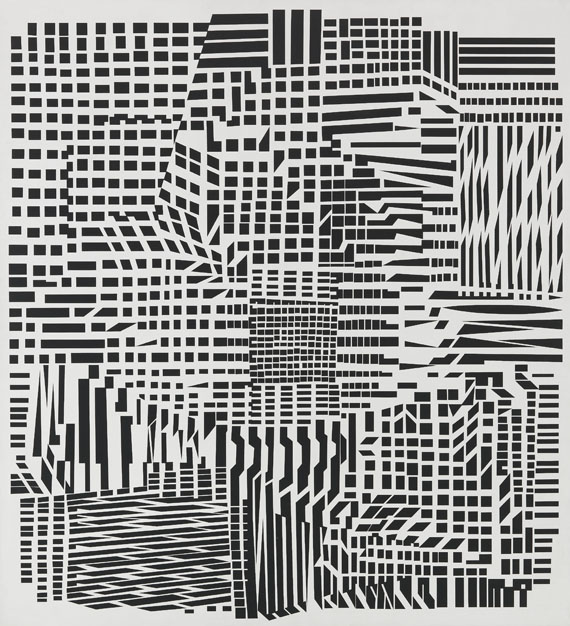 This work's authenticity has been confirmed by Pierre Vasarely. The work will be included into the forthcoming catalog raisonné of paintings by Victor Vasarely, currently compiled by the Fondation Vasarely, Aix-en-Provence.

Essay
In the 1950s Vasarely made his "Manifest Jauneâ€œ, the Yellow Manifesto, in which he outlined his program of Kinetic Art. The central idea is not to illustrate motion through the employment of mechanic means, but to make the observer's eye believe that it perceives motion through the usage of artistic means. In this context he created a number of pictures in black and white, our work is part of this series, which mark an important step in artist's cubistic fragmeatation of forms: "Vasarely's contribution to Kinetic Art is limited to [â€¦] a selection of structures that activate sight and bedazzle on the level of perception. The uncertainty of perception is biggest where Vasarely decided to liberate the composition from its constructivist issues and to piece it together from patterns. The period of the 'Blanc et Noirâ€˜ works marks the transition, as the superimposed surfaces were dispersed into grids divided into small sections, in the style of a Cubist 'plans superposÃ©esâ€˜. The image's dynamic rhythm and the dotted lines call reminiscence of Mondrian's 'Broadway Boogie Woogieâ€˜.â€œ (Quote after ex. cat. Vasarely. Erfinder der Op-Art, Wilhelm-Hack-Museum, Ludwigshafen 9 November 1997 â€“ 25 January 1998/ Kunstverein Wolfsburg 8 February â€“ 19 April 1998/ Josef Albers Museum Quadrat, Bottrop 17 May â€“ 23 August 1998, p. 120).
More Information
+
Sell
Would you like to sell a similar object?
+
Register for
Victor Vasarely
+
Buying from A-Z
+
Contact a specialist
+
Victor Vasarely Biography
Share