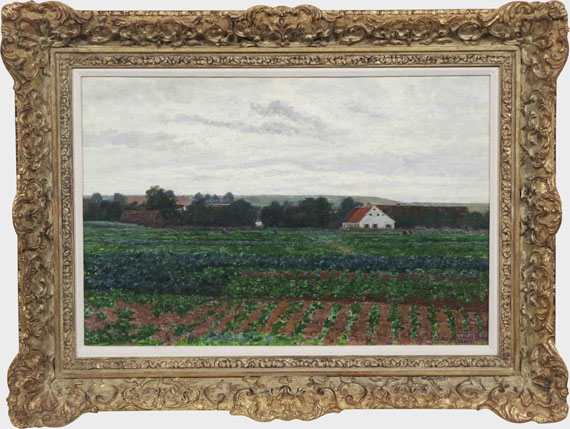 According to Hitzeroth, the painting was presumably made around 1889. Paul Baum signed and dated this work - just as it was the case with some other works - belatedly in the 1920s and reckoned the date of origin one or two years too early (see catalog raisonné Hitzeroth, p. 600). Before Paul Baum turned to a mild divisionist painting style his works were fully influenced by 19th century plein-air painting. In this context Wiechers points to the close friendship between Paul Baum and Christian Rohlfs during their days at the Weimar art academy and finds clear parallels in their works from the 1880s. Paul Baum was in possession of a painting by his artist friend, "Landschaft bei Weimar" from 1884 (today in possession of the Marburg university museum in), which can be compared with Baum's "Im Dachauer Moos": "Both motifs show vast remote landscapes as living environments. Man-made fields and paths unobtrusively fit in, houses and barns are embraced by nature. A sober, earthen coloring underlines the overall harmony. Baum integrates man into his picture, however, he reduces him to a shadowy depiction. Both painters arrange their landscapes strictly horizontal: a field constitutes the foreground and buildings, partly covered by trees and bushes, are in the center. [..] Baum's rural estates are positioned in a narrow horizontal stripe in the image's center with the bright sky right above it." (Wiechers 2007, pp. 70f.).
More Information
+
Sell
Get a free appraisal for a similar object!
+
Register for
Paul Baum
+
Buying from A-Z
+
Contact a specialist
+
Paul Baum Biography
Share