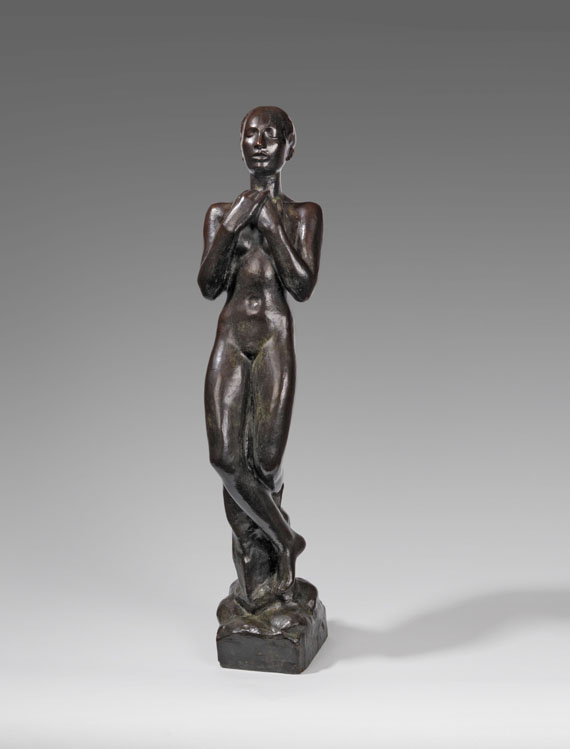 PROVENANCE: Private collection Rhineland/Berlin (presumably acquired in the 1990s, since then in family possession).

The symbolic aspect that Georg Kolbe's sculptures from before World War I largely lacked is now integrated into a creation in which the formal expression gains in importance. The self-contained form on which the 'Auferstehung' is based played a decisive in Kolbe's art for a short time in the 1920s. First and foremost the three upright female nudes "Auferstehung", "Aufblickende" and the much larger "Assunta" are examples of his formal approach to a so far unknown physical unity. A certain Formalism that Kolbe seemed to pursue intentionally in order to increase the expression was met with incomprehension by most of his contemporaries, since observation habits deeply rooted in George Kolbe's plastic work from before the war. The almost androgynous female figure serves the purpose of a concentration of the expression. The "noble simplicity" and the "calm greatness" in the sense of Johann Joachim Winckelmann's fascination for the art of the antiquity suggest the actual dimensions that Georg Kolbe reached out for with these works.
More Information
+
Sell
Get a free appraisal for a similar object!
+
Register for
Georg Kolbe
+
Buying from A-Z
+
Contact a specialist
+
Georg Kolbe Biography
Share