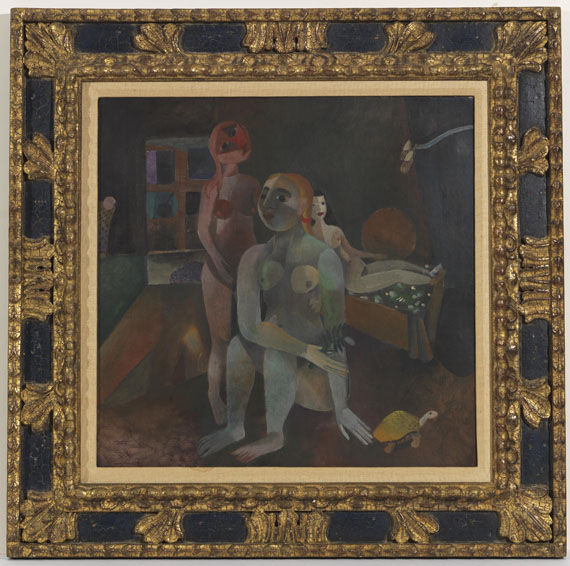 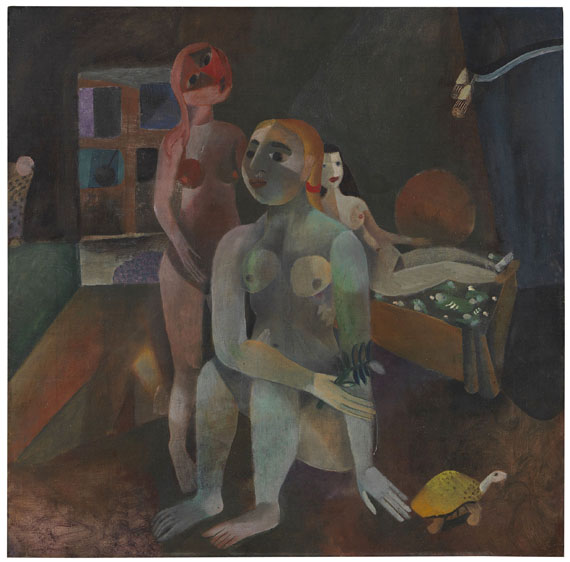 Based on late-impressionism, Heinrich Campendonk detached himself from traditional painting at an early point, owed to his participation in the "Blauer Reiter" he attained a style, which, influenced by a lot of sources, found expression in an almost naive, schematic-surreal manner. Three female nudes in an interior and a turtle going astray offer sufficient reason for interpretation. Campendonk's imagery is full of mystery and opens up a whole new perspective. The turtle, symbol of a long life, is about to go away, while the nudes remain in a kind of rigor without any communication between them. It is a waiting for something, for an event that cannot be predicted from what can be seen. The colors of the three female nudes are also an interesting aspect: the front nude in shades of green, the standing nude in pink and the small reclined nude in a pale blue. As far as the composition is concerned, the triad forms a classic entity that we know from Renaissance, however, the lack of relation between them is an aspect that opens up a new dimension. In those days Heinrich Campendonk was quite impressed by the art of Henri Rousseau, who had made the naive-creatural subject of his art. In reminiscence of the almanac "Der Blaue Reiter", which pays particular homage to the works of Henri Rousseau, this painting offered here also comes to mind, with its mysterious content it remains a challenge and as far as the artistic interpretation is concerned it counts among the best works by Campendonk from these days.
More Information
+
Sell
Get a free appraisal for a similar object!
+
Register for
Heinrich Campendonk
+
Buying from A-Z
+
Contact a specialist
+
Heinrich Campendonk Biography
Share