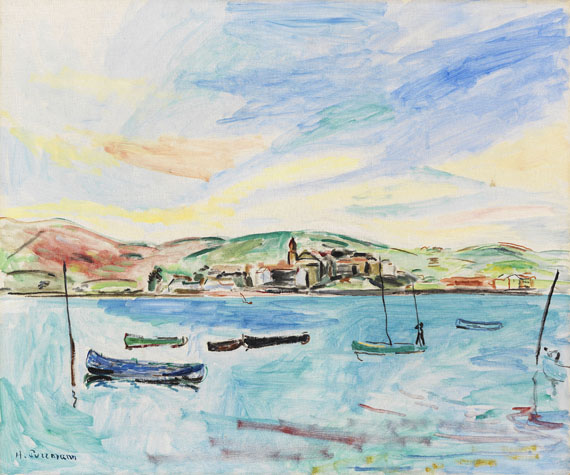 With a photo expertise by Robert Purrmann from 16 October 1987.

Essay
The close connection between Purmann and Henri Matisse, whose student and adlatus Purrmann was, made for a similarity in style that would prevail throughout his life. The easy stroke of the brush, the tremendous ability to modulate, with which Purrmann placed his canon of colors, have their origin in friendship. Purrmann, who never abandoned a certain Realism, was a painter in a traditional sense, even though his style showed features of Modernism. His view of things and landscapes is carried by an inner balance that is conveyed the observer openly and without encoding. What is so unusual is the extremely positive attitude to the color, which he had taken over from Matisse. Purrmann, just like Matisse, were able to use decorative elements in painting, without seeming artificially faddish. His colors and forms are not decorative elements in the picture, they are the subject. This is where his works differ from painting that seek to be effectual alone. In paintings of German Modernism Hans Purrmann occupies an outsider position that is solely his. His quest for a painting in its actual sense can only be perceived from the synthesis of a feeling of late Impressionism with modernist forms.
More Information
+
Sell
Would you like to sell a similar object?
+
Register for
Hans Purrmann
+
Buying from A-Z
+
Contact a specialist
+
Hans Purrmann Biography
Share 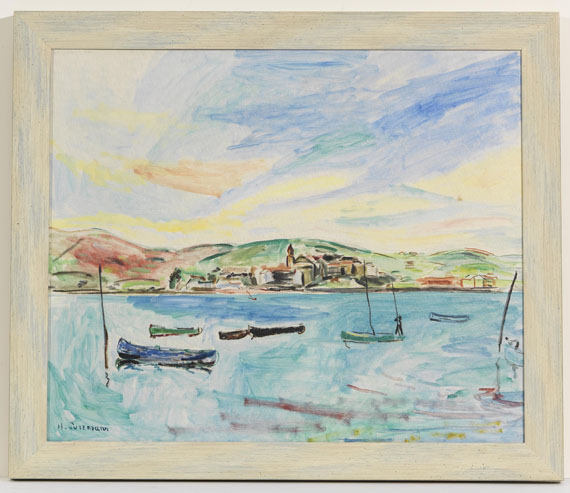