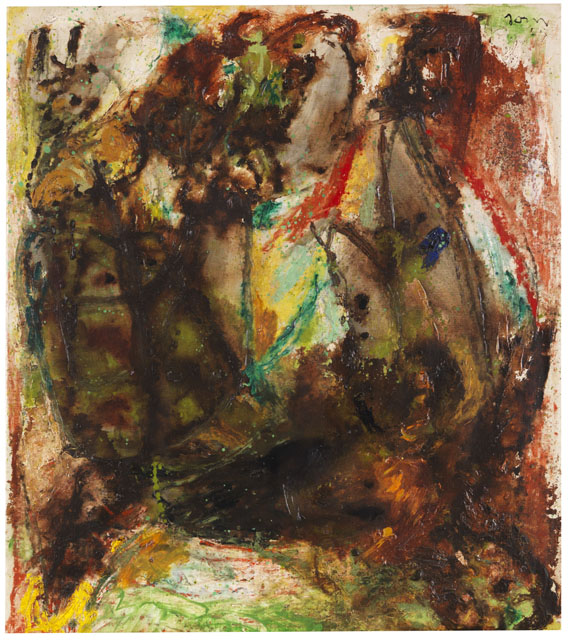 The work is registered at the Museum Jorn, Silkeborg.

Essay
In spring of 1954 Asger Jorn and his family had found a new base for their exploration of Europe in Albisola Marina on the Ligurian Coast. In the 1920s Tullio Mazzotti made the small village with an age-long tradition in artisan ceramics a center for the avant-garde. Albisola had become production site of progressive ceramic objects for many artists of Futurism. When Jorn, who just recovered from a severe tuberculosis, arrived in the South, he made friends with many potters and other locals, and was soon well-known all over the town. For Albisola he takes on the function as connector with the rest of the world â€“ inviting friends from all over Europe he organized the first international meeting for experimental ceramic art in summer 1954. In autumn the same year he began to work on a barnstorming series of small formats, which would become known as the "Dream Picturesâ€œ. With this group he reinterprets his entire repertoire of forms anew and brings the narrative readability of his figurations to a temporary end. Back homein Denmark his Copenhagen gallerist Borge Birch organizes an exhibition for this series which would mark the first truly big success in Jorn's career. The following spring Jorn was full of verve again and began to apply findings acquired through the direct access to the matter in his occupation with clay, glazings and engobe to his painting. Figure constellations, by then variations of metaphorically charged themes, give way to associative chains. His titles become more playful and soon reference proverbs, film titles and paradox commonplace puns. The creatural aspect emerges from the picture's matter. The color is not only bearer of meaning, instead it traces a process of origin that is tantamount to its form. The locust-like animal with small creatures on its back at the center of this picture shows a certain closeness to the "Aganaksâ€œ, Jornâ€™s hybrid beings, half man and half animal, that inhibit his image worlds since the 1940s. With the invention of the "Aganaksâ€œ he added a good-natured species to his repertoire of figures. Fantastic creatures with insect-like traits that continuously change, located somewhere between heaven and earth and yet clearly positioned towards existence â€“ because there is only this world. Jorn wrote to his friend and artist colleague Constant in a letter from 1950: "Tales and myths have monsters, fantastic animals and signs, they are always symbols that people used for real phenomena. [â€¦] We should not deliver account of man as animal. But should describes ourselves as animal. That is our path.â€œ (Quote from Uwe M. Schneede, Cobra 1948-51, ex. cat., Kunstverein Hamburg, Hamburg 1982, p. 138.) The neatly executed picture from 1955 is particularly surprising for its many figures and is one of the most airy and merry documents of the newly discovered paradise, a scene from a jolly game on the unknown banks somewhere in the future. [EH/ AH]
More Information
+
Sell
Would you like to sell a similar object?
+
Register for
Asger Jorn
+
Buying from A-Z
+
Contact a specialist
+
Asger Jorn Biography
Share 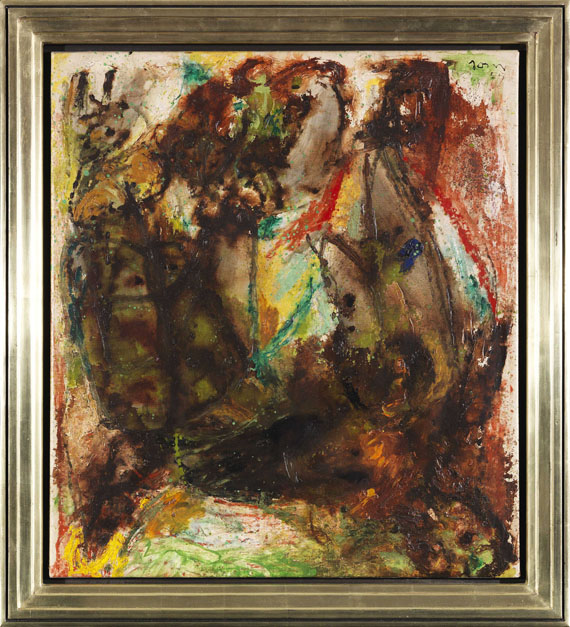