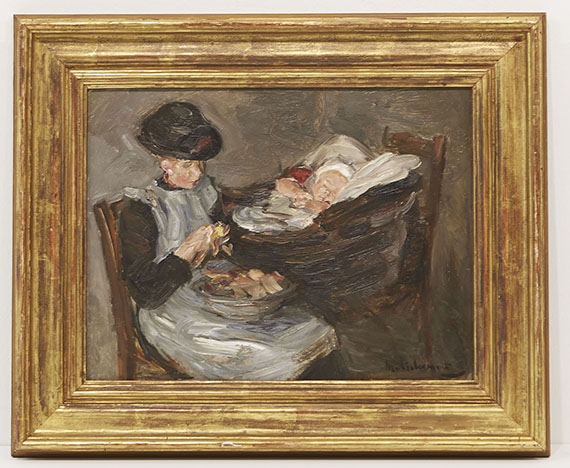 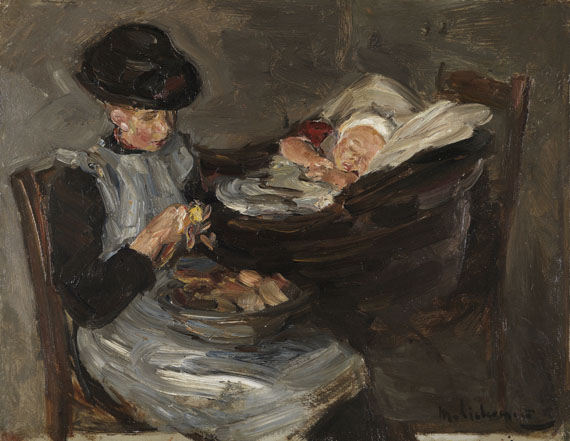 Intimate study, executed in fresh and spirited manner.
Accompanied by a written expertise issued by Prof. Dr. Matthias Eberle, Max Liebermann-Archive, Berlin, from 23 January, 2012. The work will be included into the addedna of the catalog raisonné of paintings with the number 1887/33.

Max Liebermann gets to know the Dutch village Laren through the Dutch painter Jozef Israels. Because of its charming old buildings and city walls it became a sort of artists colony. Inspired by the surroundings, the village's atmosphere and its people, Max Liebermann made soem of his most important early paintings there, among them the "Flachsscheuer in Laren" (1887, today in Berlin, Alte Nationalgalerie), which is based on a large number of preliminary studies, or the "Kirchgang in Laren" (1899). This small study emanating a feeling of homely security, executed in a flowing-broad stroke of the brush, may well be considered a particularly charming work by the artist, as it shows a coherent image composition with a light management that is quite characteristic of Max Liebermann, and which puts special emphasis on the center of the domestic scene. It was works like this that earned him a reputation of a 'painter of the poor', and it took Max Liebermann quite some time before he received the audience's attention. And yet, similar subjects were already popular in the Netherlands in the 17th century, today they are integral part of museum collections and documents of a painting that sought and found its meaning in the reality of the scenes.
More Information
+
Sell
Get a free appraisal for a similar object!
+
Register for
Max Liebermann
+
Buying from A-Z
+
Contact a specialist
+
Max Liebermann Biography
Share