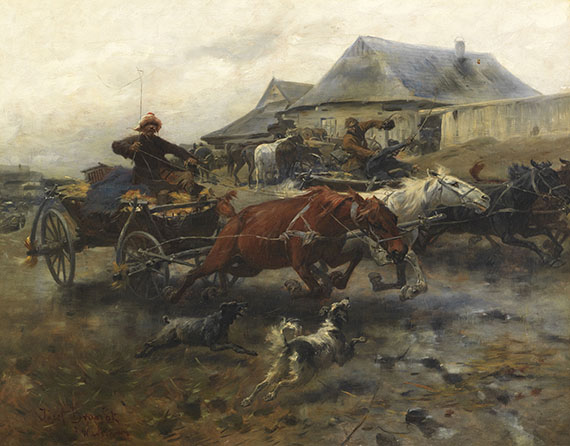 Essay
Alongside the famous monumental works which were shown at international exhibitions, Brandt's oeuvre also comprises many small paintings that depict rural- and small town life in Poland and Russia. The artist found his motifs on his annual journeys to Poland, Russia, the Ukraine, Hungary and the European part of Turkey. In many cases he executed his works right at his Polish summer house in Oronsk."Despite a generous arrangement and spirited lines […] the great love for the detail […] allows the observer to perceive the scene's authenticity. In general, Brandt's pictures are narrations that want to be read. Despite all variegation of spots, blotches and color fields, his pictures from the [18]80s are subject to a partly gray and partly brown tonality that dominates the overall impression and has a stringent effect on the dramatic scene." (Hans-Peter Bühler, Jäger, Kosaken und polnische Reiter, Hildesheim et al1993, pp. 108f.).
More Information
+
Sell
Would you like to sell a similar object?
+
Register for
Josef von Brandt
+
Buying from A-Z
+
Contact a specialist
+
Josef von Brandt Biography
Share 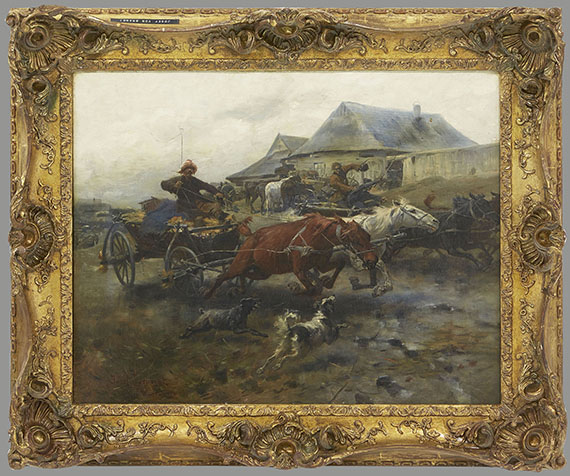