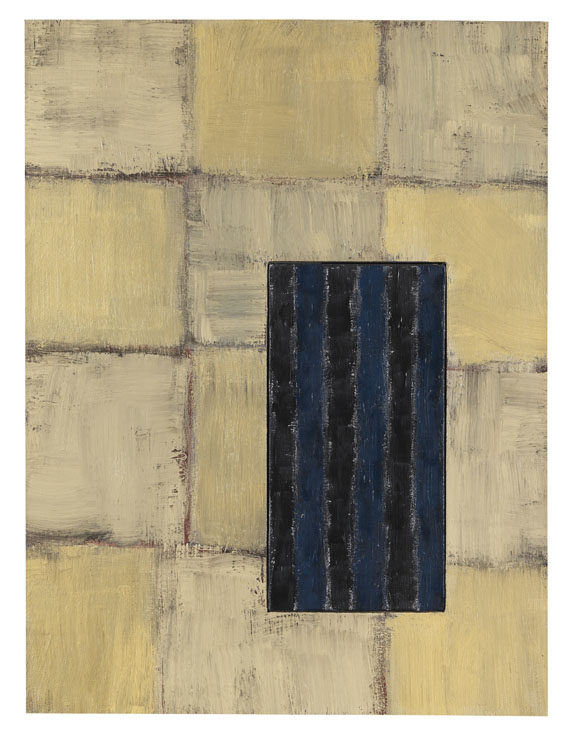 One of the extremely rare paintings by the acclaimed artist. Highly sought-after on the international auction market
The artist chose this work for the retrospective "Twenty Years".

Essay
Scully's minimalist motifs of stripes and squares originate in the 1970s in context of American Color Field Painting of a Kenneth Noland or Mark Rothko. For his art he applies different techniques and uses various material. While Scully tries to contour the edges of the linear color fields in the making of his earlier works by means of tape, adding an optical glimmering to his paintings and increasing them to high-precision geometrical line structures, he abandons this preciseness in the 1980s and painted, just as it is the case with this work, freehand. Layer by layer, the contours remain visible only as soft contours and reach high definition only in these spots where Scully - like in our work - joins various canvasses and creates a sort of marquetry image surface. Since Scully applies the oil paint layer by layer, and usually wet in wet, different colors shimmer through here and there. Brush strokes and layers of paint clearly remain visible, with mostly dark and earthen tones dominating. Inspired by Moroccon cloths, Scully attained his reduced stripe motifs, which he explains as follows in 1987: "My pictures are about the manner how the stripes can be painted, to him it means the same as the apple or the bottle for Cézanne, which he painted time and again. Stripes are neutral and boring - we see them everywhere - and that allows for so much room for interpretation." (quote after: Sean Scully. Gemälde und Arbeiten auf Papier 1982-1988, ex. cat. Städtische Galerie im Lenbachhaus, Munich 1989, p. 18).
More Information
+
Sell
Would you like to sell a similar object?
+
Register for
Sean Scully
+
Buying from A-Z
+
Contact a specialist
+
Sean Scully Biography
Share