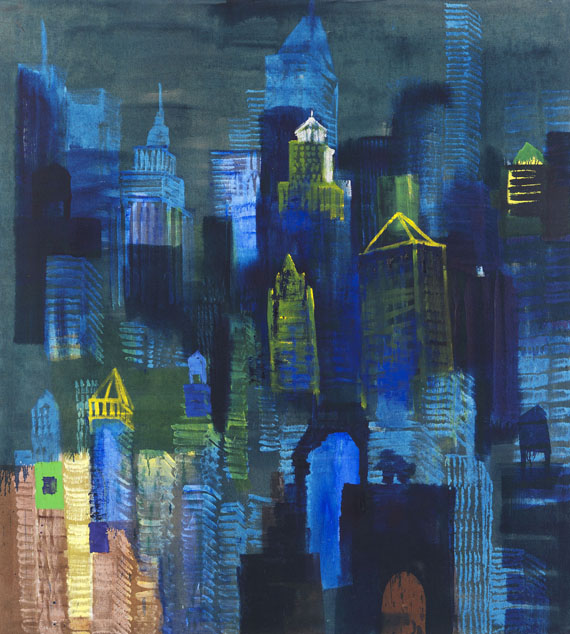 This work's authenticity has kindly been confirmed orally by the artist.

In order to pursue new artistic paths, Fetting went to New York for the first time in 1978. What he found were new motifs, as well as the light, which is so characteristic of him and the expressive urban atmosphere which his colorful works reflect. Over the following years Fetting returned to the American metropolis, where he also resided for some time, time and again. Accordingly, in this large-size work he does not only remain true to his artistic means but also to his fascination for the Big Apple: He captures the city's vibrating skyline at night with a quick and spontaneous gestus and without any preliminary drawing. Everything is built on color: the space, the impression of perspective, the volume, the light. This way Fetting opens up a stunning and flickering sea of houses in front of the obbserver's eye, who feels as if standing right in front of the skyline of New York. [JS]
More Information
+
Sell
Get a free appraisal for a similar object!
+
Register for
Rainer Fetting
+
Buying from A-Z
+
Contact a specialist
+
Rainer Fetting Biography
Share