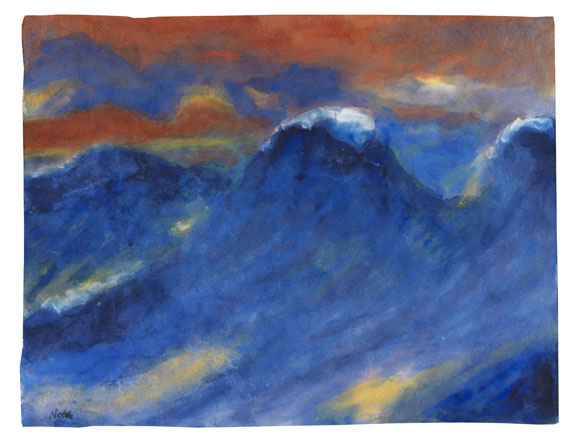 Accompanied by a photo expertise issued by Prof. Dr. Manfred Reuter from 10 February, 2015. The work is registered at the Ada and Emil Nolde Foundation, Seebüll.

Essay
There was no other protagonist of Modern Art who was as intesively occupied with the sea and its phenomena as Emil Nolde. His domicle in Seebüll and its proximity to the sea inspired Nolde to ever new interpretations that were beyond the common accounts. In a North Sea, which preferrably presents itself a gray blue, Nolde saw color aspects that deliver account of his very own view of the sea. This way he added an entirely new aspect to a landscape without land. The wave crests depicted here in an abysmal blue in front of an evening sky in rust red, are expression of fascination and admiration of an elementary force that only pristine nature has to offer. Emil Nolde's illustrations of the sea are always characterized by his own emotions, but also by his respect for the uniqueness of an incomprehensible phenomena.
More Information
+
Sell
Get a free appraisal for a similar object!
+
Register for
Emil Nolde
+
Buying from A-Z
+
Contact a specialist
+
Emil Nolde Biography
Share 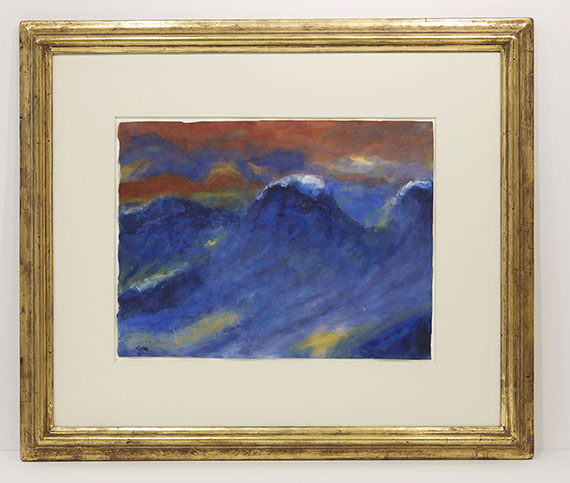