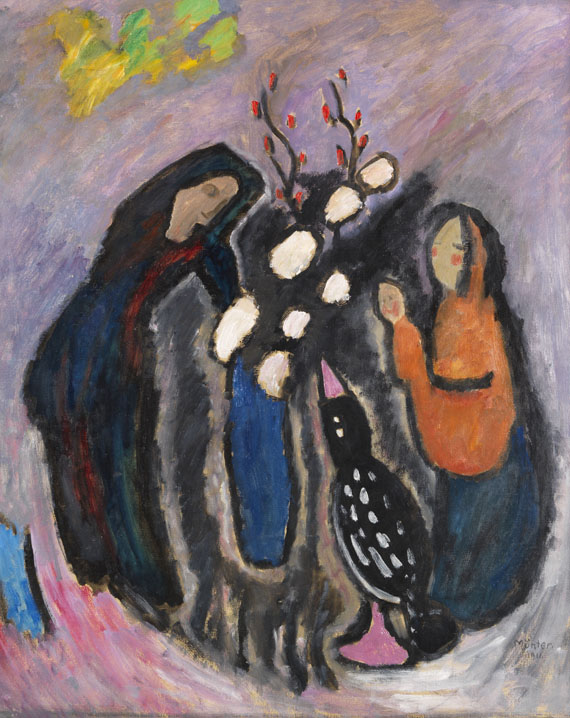 Essay
Her partnership with Wassily Kandinsky had great, however, not decisve influence on Gabriele Münter's creation. Particularly after Kandinsky had turned to pure abstraction, Münter realized that she would not pursue this path. Apart from several attempts, abstract compositions are a marginal phenomenon in her work. What is interesting, though, is the approach that Münter learned from Kandinsky. From a representational composition abstraction is kind of carved out as meaning and is formed to become an independent composition, that, as it is the case with our work, is just a slight reminiscence of the model. What else is remarkable is the long period of time that lies between figurative composition and its conversion into abstraction.
In the painting "Stilleben im Kreis" Gabriele Münter remains within the frame of her compository approaches. The domestic inventory, preferrably objects from her rich collection of folk art, are part of the still life formed in the painter's sense. Based on her studies of rural reverse glass painting, which Gabriele Münter and Wassily Kandinsky had discovered as a source of artistic inspiration, this still life also shows references, both formal ones as well as with regards to content, to this folk art. But the composition's arrangement in an oval hints at the intention to fathom another dimension of meaning behind the mere folkloristic motif. A dimension that does not exclude spiritualism. A conception that is rather rare in her oeuvre, as the reality of things is the most decisive factor for her perspective.
More Information
+
Sell
Would you like to sell a similar object?
+
Register for
Gabriele Münter
+
Buying from A-Z
+
Contact a specialist
+
Gabriele Münter Biography
Share 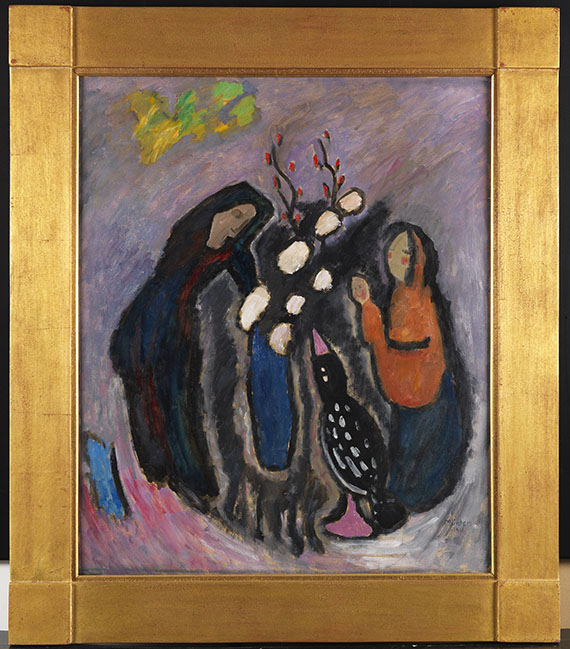