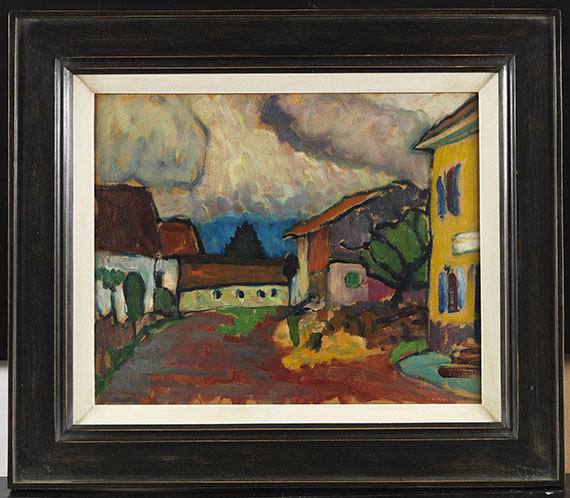 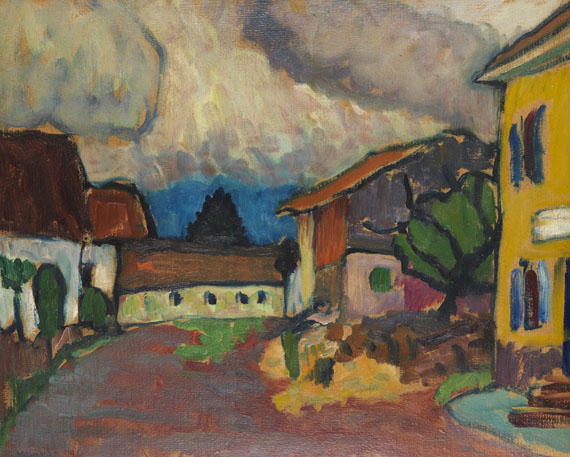 Strong early work from the most important period of creation.
Accompanied by a written confirmation issued by Gabriele Münter- and Johannes Eichner-Foundation on 27October, 2015. The painting will be included into the catalog raisonné of paintings ny gabriele Münter with the title "Pfarrgasse mit Holzhacker (Holzhauer)".

Under the influence of her teacher and later partner Wassily Kandinsky, Gabriele Münter's art gained in power and expression. Münter abandons fragmental aspects and thus also her earlier dependency on late Impressionism. Compositions are structured by large color fields. The dark and contouring line circumscribing the individual image components serves as both a means of support and structure. In works from those days Münter had attained a style that would become decisive for almost her entire future creation. In her own words: "After a short but agonizing period I made a great leap - from imitating nature - more or less impressionistic - to feeling the content - to abstraction - to rendering an essence", wrote Gabriele Münter looking back onto the year 1908, and she continued: "If I had a formal model - and that was definitely the case between 1908-1913; it definitely were van Gogh through Jawlensky and his theories...But that may not be compared to what Kandinsky meant to me. He loved my talent, understood, protected and supported me" (quote after: Annegret Hoberg, Wassily Kandinsky und Gabriele Münter in Murnau und Kochel 1902-1914, Munich 1994, pp. 45/46 and 52).
More Information
+
Sell
Get a free appraisal for a similar object!
+
Register for
Gabriele Münter
+
Buying from A-Z
+
Contact a specialist
+
Gabriele Münter Biography
Share